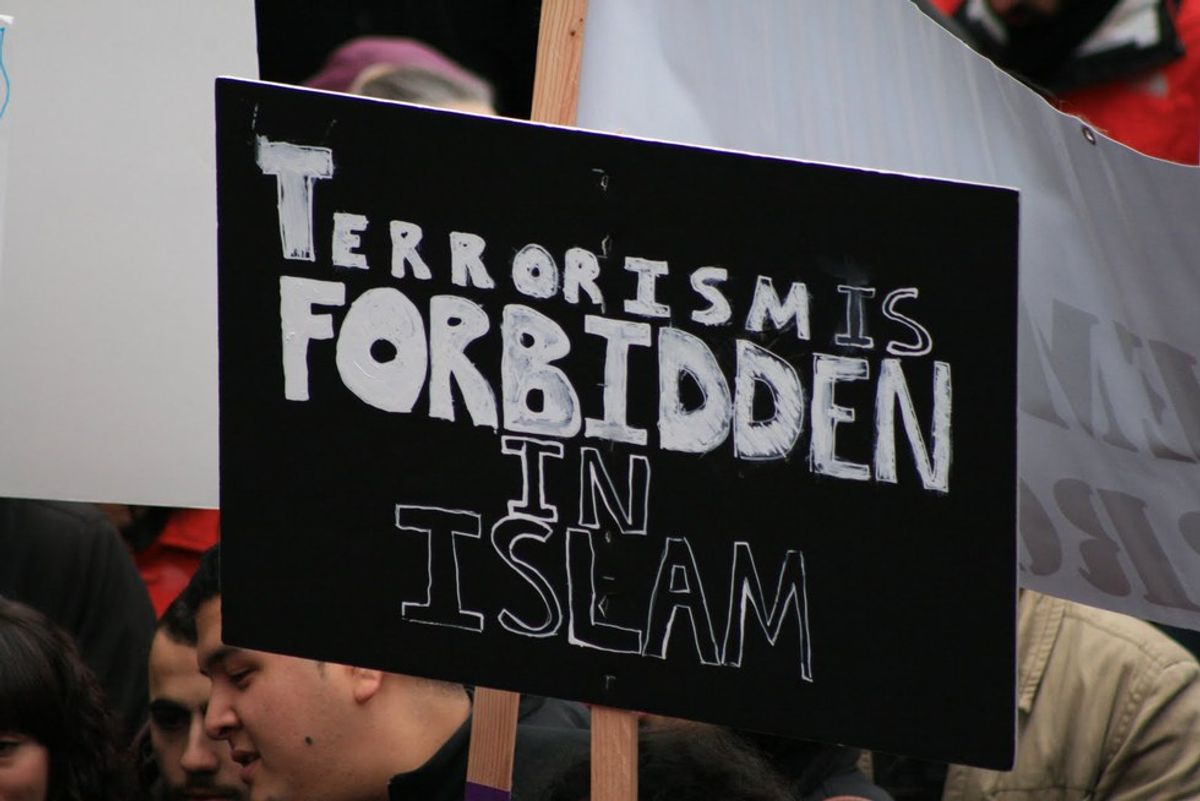 “Take that napkin off your head! Go back to your country you terrorist”, the angry white man screamed as I crossed the road. This hatred was and is still a reality that many Muslim women and men face on a day-to-day basis in the United States. So where does this hatred stem from? It comes from American society equating the religion of Islam with terrorism in various ways.

Terrorism is defined as the use of violence and threats in order to make a point. The argument isn’t in who was or wasn’t responsible for 911 but rather the focus is to dispute the practice of generalization, stereotyping, and grouping that American society equates with Islam. So I’ll ask the questions I know many people are wondering. Why doesn’t society blame every white man for the school shooting in Roseburg, Oregon, or every Asian for Seung-Hui Cho's 2007 mass causality in Virginia Tech which left 32 people dead. Why is it when an individual who claims to be Muslim commits a crime, that all Muslims are held responsible? And further more, why does the media fail to mention or hold responsible the religions of individuals of other races that commit these same crimes? Have you ever once heard Christian man or Catholic women commits this or that crime on your news channel? Why is that, I wonder? While you ponder that, how about I take a minute to define Islam.

Islam is the religion of the Muslims, a monotheistic faith believed to have been revealed to Muhammad, the Prophet of Allah (God). Islam’s foundation is built upon the 5 pillars of Islam; pillars being very similar to the commandments that many religions base their faith upon;

- Shahada: Testifying to God’s One-ness: The declaration “There is no God but Allah (name for God) and Muhammad is His prophet. - Salat: (Prayer) 5 prayers a day (Fajr- before sunrise, Zuhur- noon, Asr- mid-afternoon, Magrib-sunset, Isha-Evening). - Zakat: Giving charity. - Sawm: Fasting during the month of Ramadan. -Hajj: Pilgrimage (Every Muslim man and woman if physically and economically able should try to make the pilgrimage to Mecca at least once in his or her lifetime. ( “Five Pillars”)

Nowhere in these pillars or commandments is violence encouraged. In fact you will find in the Quran it states, “if any one killed a person, it would be as if he killed the whole of mankind; and if any one saved a life, it would be as if he saved the life of the whole of mankind…” (“Chapter Five, Verse 32”). So can we agree that these Terrorist organizations claim to take the faith of Islam, but do so in a manner that is misconstrued and extreme? The sole purpose of this paper is not to sell you on Islam but to however dissociate the religion with the stigmatized belief that all Muslims are Terrorists because frankly, it’s just not true. While also focusing on the way the branded belief of Muslims being terrorists has lead to societal brainwashing, and cultural terrorism.

In his interview on CNN Scholar of religions and professor of creative writing at the University of California, Riverside, Reza Aslan talks about the all too common mistake of painting all Muslims with a single brush. He also focuses on how using 3 or 4 examples of extremist African countries to define the stance Muslims take in their moral, societal, and ethical beliefs, is the very definition of bigotry. Reza is asked if Islam promotes violence, he answers by stating, “Islam doesn’t promotes peace nor violence Islam is just a religion like every religion in the world it depends on what you bring to it if you are a violent person your Islam, your Judaism, your Christianity, your Hinduism, is goanna be violent. There are Marauding Buddhist Monks in Myanmar slaughtering women and children, does Buddhism promote violence? Of course not. People are violent or peaceful and that depends on their politics, their social world, they way that they see their communities or how they see themselves” (“Aslan”).

This interview shines much light on the inclination of society to fall at the feet of the ignorant without taking a second to look back and try to understand things for ourselves. Look at Politicians such as Donald Trump who play on people’s fears of terrorism and use them to their benefit to show there ability to come up with a solution and save American society from these “monsters”. What he’s really doing is provoking and preaching hate because he knows there is this bar right extremist American society that will soak up this hatred out of fear for the lives of their families.

Look at groups like KKK, white supremacists, or Nazis, who use people’s extreme fears for their benefit. Look at the Nazi’s. Before putting Jews in concentration camps and gas chambers, Hitler had to provoke the element of fear in these people and build hatred toward these individuals by dehumanizing them. Which is why these hate groups have been successful in getting people to follow them by promoting this same three step process, fear, hate, dehumanization.

Zogby poll found that only 27 percent of Americans had a favorable view of Islam, down from 35 percent in 2010. By February 2015, more than a quarter of Americans were telling the pollsters Lifeway Research that they believed that life under ISIS rule “gives a true indication of what an Islamic society looks like” (“Zogby”).

The media does a great job of painting this vivid picture that deems all Muslims to be terrorists. Look at the current refusal of Syrian refugees. More than 250,000 people have died since the violence broke out in Syria in 2011, and at least 11 million people in the country of 22 million have fled their homes. Syrians are now the world's largest refugee population, according to the United Nations. Instead of taking a moment to look at these poor innocent people who have been stripped of there rights and freedoms and forced to leave the country they call home, many have elected to focus on there own selves and benefits. Yes, there is a fear that terrorist could slip in but then again, America has one of the most powerful labor-intensive long emigration security processes in the world. If we don’t have faith in our system and further our government then where does our faith lie?

One of the ways the media and many politicians seek to justify the refusal of Syrian refugees into the United States, is by highlighting the Paris attacks, where random outbursts of violence by suicide bombers took place in Paris, France the same day killing approximately 129 people. The way the media and many politicians seek to justify this notion is by using this tragic incident to inflame the fear of Muslims to the public. "It is unfortunate that anyone would use the tragic events in Paris to send a message that we do not understand the plight of these refugees, ignoring the fact that the people we are talking about are fleeing the perpetrators of terror," Gov. Jack Markell said in a statement. How can this twisted ideology of all Muslim’s being terrorists allows for the justification of watching woman and children die day in and day out.

Prior to knowing anything about the dead Boston Marathon bombing suspect Tamerlan Tsarnaev, we were told that he had “recently became a devout Muslim who prayed five times a day." This piece of information was featured as the lead in various articles and social networks. As the day went on with increasing panic and an intensifying sense of terror stemming from television and computer screens across America, while news outlets rushed to put out articles with any information they could find on this suspect, it became increasingly clear where the focus of the story would be headed. The most important piece of information would be the suspect’s religious identity. Regardless of how deeply he was associated with Isla, or the Muslim community. It is exceedingly clever of the media to relate Tsarnaev’s recent status as a praying "devoted Muslim" implies a connotation between his change of sentiment, his identification as a Muslim, and his supposed decision to carry out these murders. Where the act of prayer is strategically associated with the motive to kill.

There are various ways in which American society equates Muslims with terrorism, but above are just a few of those many ways. It is so important to do your own research to further your understanding of various aspects of life. Don’t believe everything the media, politicians, or society, says. Islam is a religion, just like many other religions, that has strict moral and ethical guidelines. Though the form of practice may be different, there aren’t that many differences between Islam and many other religions observed in the United States and elsewhere.