I learned a LOT from our trial run of living together. 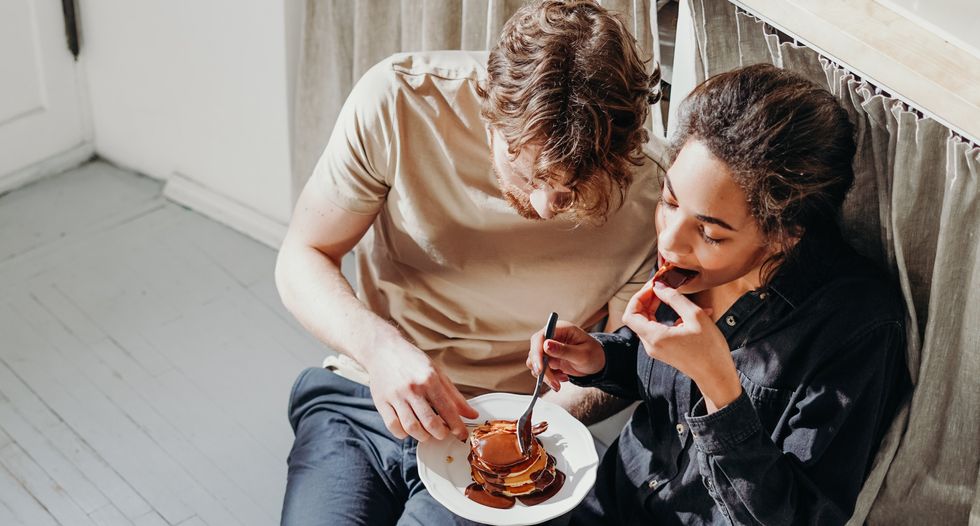 Recently, my aunt and uncle were planning a vacation and needed someone to house sit and look after their dog. I said yes, and of course, me being the little scaredy-cat I am, made sure my boyfriend, Jacob, would tag along. Eleven days and nights is a lot of time to spend alone, and I wasn't about to do that. He reluctantly agreed, and he ended up spending 10 out of the 11 nights with me and all 11 days.

After three and a half years of spending almost every day together, you would think we would be used to being with each other all the time, but that wasn't the case. Before living together, we would spend about 8-10 hours together most days, and then we would usually part ways at night. While house-sitting, though, we spent almost all 24 hours together each day, which was a really big shock to our usual system.

Luckily, the whole experience went better than expected, and we came out of those two weeks feeling better about our relationship than ever before. And, on top of that, it actually taught us a lot of things we can use to better our relationship and make it much easier when we hopefully live together in the future (fingers crossed). Here's what we learned living together for two short weeks.

We very quickly got into a routine of hanging out all afternoon, making dinner, watching a movie or show, then going to bed. Obviously, that got boring very quickly even with the short time frame. When we move in with each other indefinitely, we plan to spice it up sometimes with board games, date nights, and maybe sometimes even doing our own thing, because that's important, too.

2. Living together was much easier than we both expected.

Going into this our expectations for living together were kind of low (more so for him than me, even though I'm the only child). We thought we would get on each other's nerves. To our surprise though, it was actually really easy and fun. Seeing each other was stress-free, no one had to drive anywhere or pick the other up, and we got to spend effortless amounts of time together.

3. You can live together and still be independent.

This was his biggest fear. He thought he wouldn't be able to still do the things he enjoyed whenever he wanted if I was there, not because I wouldn't let him, but because he would feel bad doing those things while I was around. After a couple of days, he realized this wasn't the case. If he was playing video games or watching Rocket League videos on YouTube, I would watch Netflix on my laptop or sit outside for a bit. He didn't bother me when I was busy and I didn't bother him when he was. We understood the other needed their own space. That's what worked best for us and I think we will carry this habit into the future.

4. We are both very accommodating to each others' needs.

If I needed the TV to work out, he was more than willing to shut off his game for me. If he wanted to stay up later than I did so he could talk to his friends on Xbox, I didn't get upset with him. We quickly gathered that when living together, we might have to compromise, and that's OK. He can come to bed when he wants, even if I get sad, and I can steal the TV for 15 to do a workout video, even if he's missing out on his game. We didn't get mad or frustrated with the other because it's just a sacrifice you have to be willing to make when you're living with someone else, and we both think the other is more than worth it.

5. It's much easier to work through problems because you're practically stuck together.

Sometimes he or I would catch an attitude, but instead of a fight breaking out even though it's 11 o'clock at night and he's about to leave and I still want to talk about the problem, we got to fix it and talk about any issues there at the moment. Neither of us had an excuse to leave, we were stuck together, and that meant we needed to fix the problem or be upset with each other, which neither of us preferred. Living together led to disagreements ending much quicker, which I hope is a common occurrence when we do actually live together.

6. The little things make all the difference.

I did his laundry and folded his clothes for him, even though he didn't ask. He set up the kitchen table and lit a candle for dinner to show me he was trying. Spending almost all your time together can get boring and tiring, but when you do things for the other, it shows them that you're still in it. I definitely wouldn't fold anyone else's laundry (I barley fold mine) but I loved doing it for him because I knew he would appreciate it.

Obviously, we know that house sitting isn't anything like actually living together, but it gave us a good taste of what it could be like and I think we're both excited about that. This "trial-run" made our relationship so much stronger and even more excited for the future, and we are both so grateful that we got this opportunity.