Life's a Marathon, Not a Sprint

Life's a Marathon, Not a Sprint

How to change your habits and behaviors for the better 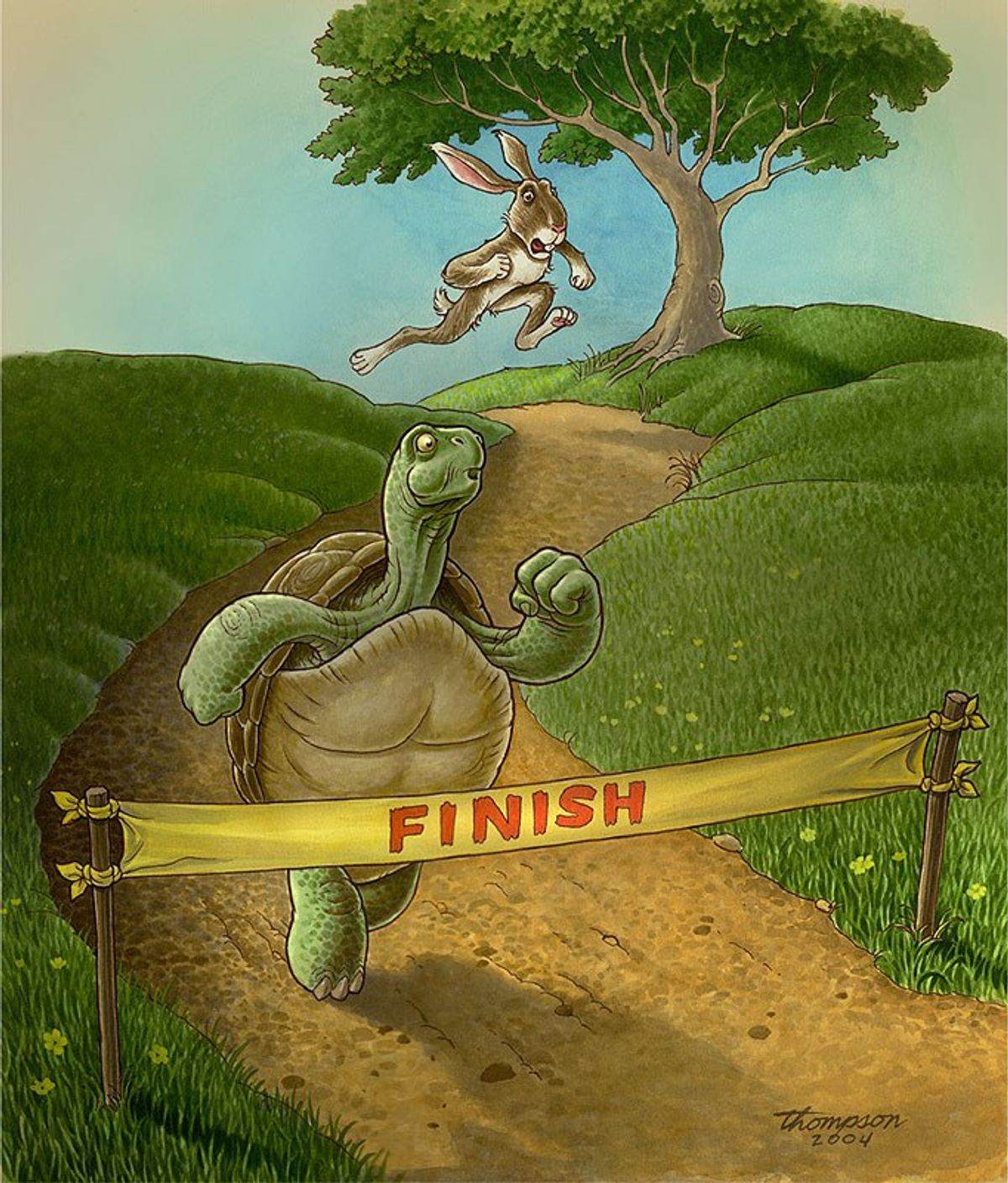 It's hard to develop new routines and new habits. No one wants to forfeit so much time and energy to exercise, reading, writing, meditation.

We live in a culture that makes this difficult sometimes. We applaud people who seem like they are able to achieve instant success. Many times we look at achievement in any field or discipline like a depiction in a movie: the big interview, the pitch day, the all-nighter are more exciting and sexier than daily practice and discipline.

The problem is that the habits that help us the most are the hardest to form. They don't happen overnight... and you're not likely to see any immediate results for your work.

THE TORTOISE & THE HARE, A DEEPER MEANING

The tortoise and the hare is an extremely simple story, one of the first fables most of us learn as children. Usually we're told this story to show children the meaning of patience and diligence: 'Slow and steady wins the race...' but I don't think that the author made this story just for children.

"A HARE one day ridiculed the short feet and slow pace of the
Tortoise, who replied, laughing: "Though you be swift as the
wind, I will beat you in a race." The Hare, believing her
assertion to be simply impossible, assented to the proposal; and
they agreed that the Fox should choose the course and fix the
goal. On the day appointed for the race the two started
together. The Tortoise never for a moment stopped, but went on
with a slow but steady pace straight to the end of the course.
The Hare, lying down by the wayside, fell fast asleep. At last
waking up, and moving as fast as he could, he saw the Tortoise
had reached the goal, and was comfortably dozing after her
fatigue.” [1]

The story on the surface may be simple, but if we look further into the make-up of the characters we can see broader truths and some insight into how to address the problem of forming better habits.

We tend to view animal characters by how they remind us of humans:

Here, let's look at them as animals: their biological make-up, what they do, how they interact with other animals, what impact they make on the world.

Like other rabbits, the hare is a small furry, quick, vibrant animal.

It moves rapidly and often without direction, typically as a reaction to something else, and for a fairly short period of time. It is pleasing to look at; it's furry exterior and quick movement represent liveliness and good health in nature. It lives for a few years and there are many of them. It mainly serves as food directly/indirectly for other animals. After a rabbit comes of age, there are few features that can cue the untrained eye to its age... which is fairly arbitrary since its life is so short.

Pretty harsh assessment for a rabbit, right? It may seem that way, until you look at the contrast from the Tortoise...

The tortoise can survive in almost all climates and terrains, by themselves or in groups

The hare exists only in a restricted climate and terrain.

Though they move quickly and with great agility, most rabbits move without purpose or direction. For this reason, most rabbits die within miles of where they were born. Tortoises often travel across entire continents during the course of their life. Each day of travel yields few slow, deliberate steps in the tortoise's intended direction. The pace allows the tortoise to adjust it's path shifts in terrain and trails, as well as guard itself from predators.

SO WHAT AM I GETTING AT?

From this point of view, the plot of this story is arbitrary; only symbolism matters. It's important because it provides a few new "morals of the story."

Look at the tortoise: Its movement can represent the lack of surface level progress that is achievable in a days' time... The slow deliberate pace reflects the boredom, monotony, and discipline of those whose lives yield great returns... the small daily deposits go further than the large spurts... a series of small steps each day goes further than sporadic sprints.

Look at the hare: Its movement represents immediate response and action to the present moment. It's quick pace in response to what arounds it represents the restrictiveness of living a reactionary lifestyle instead of a proactive one.

NEW MORALS OF THE STORY

Move For Tomorrow, Not Today.

I don't mean to imply that moving swiftlydoesn't have value. However, a life with purpose requires patience and at times the appearance of minimal progress, yet yields insurmountable long-term benefits.... Quickness, cunning and aggressiveness may help conquer the immediate future, but consistency and the ability to stave off complacency will help us master our whole lives.

We have ample opportunities to make others believe we can achieve success overnight. Our ability to resist this indulgence is integral to our success in developing real skills, real habits and real futures for ourselves and those around us. Success is boring- culture would have us believe otherwise, but success and improvement is not a culmination of last minute essays, game-days, and all-nighter study sessions sporadically. It is a culmination of consistent inputs in the presence of distractions and discouragement. It is not shooting 600 shots the night before the big game, it's staying after practice for 30 minutes every day for the whole season.

As you probably picked up, these differences don’t make success seem any easier-- just a different type of difficulty. The story and it’s content may provide a different way of viewing progress, but the principles of patience and discipline are just as daunting as intensity and urgency. At the same time, the story gives us some assurance that we can trust in consistency. Moving “slowly but steadily” like the turtle isn’t just a technique that works for some: the contrasts in how the tortoise and the hare live shows us that the world works in favor of these principles.

Each day, plenty of us get discouraged when working to improve ourselves or our situation. I try to write each day, read each day, and run 3 times a week. Some weeks I seem to only be able to write a few hundred words a day, read but 6 or 7 pages a night, and run for a few miles. Not seeing immediate progress can be frustrating and committing to the same process every day is often monotonous/boring. But like you, I can rest assured that If I maintain this process and continue to exercise consistency and patience, the race will take care of itself.