Kneeling for the National Anthem
Odyssey
CurrentlySwoonLifestyleHealth & WellnessStudent LifeContent InspirationEntertainmentPolitics and ActivismSportsAdulting
About usAdvertiseTermsPrivacyDMCAContact us
® 2023 ODYSSEY
Welcome back
Sign in to comment to your favorite stories, participate in your community and interact with your friends
or
LOG IN WITH FACEBOOK
No account? Create one
Start writing a post
Politics and Activism

Kneeling for the National Anthem

And some of the complexity of this protest. 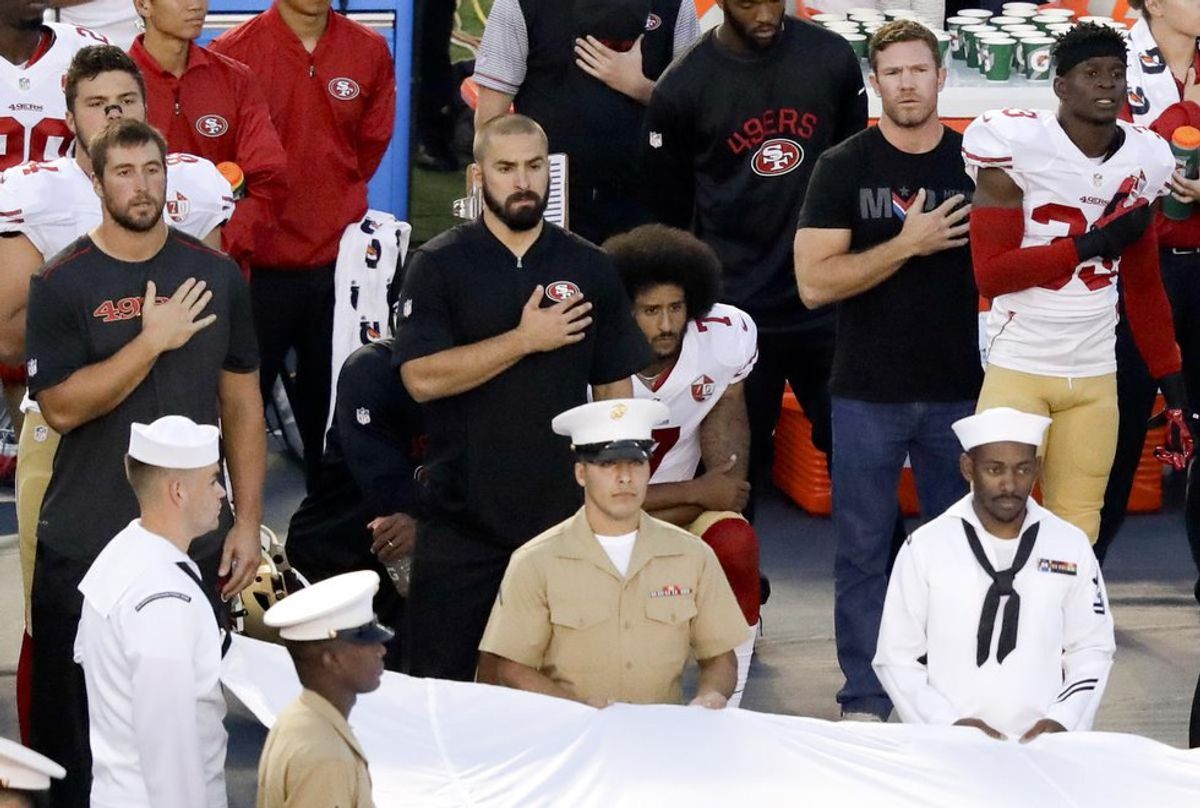 This is such a divisive, hotly debated topic, and I sort of understand why. Wherever people stand, in terms of their values, it hurts them deeply. If they think that it is perfectly just for Colin Kaepernick and others to kneel during the National Anthem, then it hurts that people would be so blind as to hate something constitutional, so willfully ignorant of their own sins and how they have wronged another people, it hurts that they would hate something that is in line with the very nature, supposedly, of American values. On the other hand, it hurts all those people who have fought, or who support those who have fought, for somebody to refuse to stand during something that represents all the American values for which they have fought, that represents all the men who have died fighting. That is reductive and summarizing, but I hope it is sufficient for me to continue writing.

It's so complex because, I think, each side, to some degree, has some credence to its argument. Personally, I was immediately furious when I heard that Kaepernick kneeled for the Anthem, which makes sense, considering I come from a military background, I am dating a soldier, and I love this country deeply. However, I thought about it, and thought about it, and thought more, and I began to question myself.

You see, it is completely within Kaepernick's (and others') rights to kneel during the Anthem. And yes, as Americans, we should support their right to protest, because if we silence all opposing voices, then where are our American values? What kind of freedom are we defending? They are kneeling for a just reason, and I would never ever tell anybody to do something that does not correspond with his or her moral values. What is wrong is wrong and that must be acknowledged.

However, must they kneel for the anthem? Or would another form of protest be more effective and more respectful? I don't know the answer to that question, and I do not know if it is a just question, or if it is simply the fact that it deeply pains me that anybody would ever kneel during the Anthem that makes me ask it (are my morals flawed that it so deeply pains me?). I have a very real knowledge of the sacrifice that is associated with the Anthem. I was born where they fly the bodies back from overseas, where they fly in those flag-covered coffins. I daily think what if my love dies, what if I have to set that tri-fold flag up on my mantle next to his picture, what if I have tell our kids that their daddy was a hero. It kills me that anybody could neglect that. But I imagine it pains them just as much to think about all the injustice that has been done to blacks in this country. We have done injustices beyond words. My account is weak (you would be best to ask somebody with experience) because I am so far removed from those injustices that I simply cannot understand the degree to which it pains them, what we have done.

I make an error, we make an error, in saying "us" and "them." Social psychologist, public theologian, author, and professor, Dr. Christena Cleveland, an incredibly intelligent, graceful black woman, spoke compellingly on this topic in chapel recently. She spoke about how dangerous it is for it to be "us" and "them" and how dangerous it is that we all do it to each other. She spoke about how dangerous it is that we refuse to empathize with each other, that we refuse to speak to each other. Of course, all is easier said than done. And of course, of course, there is strength in personal identity, strength in that which separates us.