What Athletes Are Protesting By Kneeling In 2020 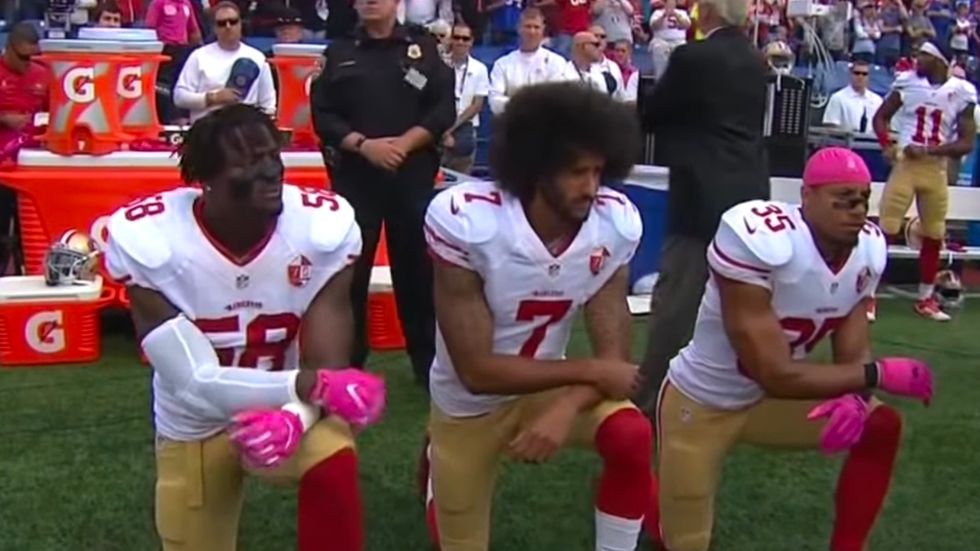 Recognize athletes as American citizens that have First Amendment rights.

I hope I don't have to take forever to explain this, but we have to remember that most athletes are, in fact, American citizens, and therefore "Congress shall make no law respecting an establishment of religion, or prohibiting the free exercise thereof; or abridging the freedom of speech, or of the press; or the right of the people peaceably to assemble, and to petition the Government for a redress of grievances," (the First Amendment) applies to them as well.

In the case of National Football League players, their league does not mandate standing for the anthem (other sports association rules, like those for the NBA, do). So if the governing document allows for protest, and players in some leagues are allowed to do the same, what makes kneeling during the anthem so problematic? Hopefully, we can all see that athletes are citizens exercising a basic American right.

Correctly identify what is being protested.

Back in 2016, some people wondered what exactly was being protested when players — particularly NFL players — were taking a knee. Was it racism? Was it the flag? The military? Four years later, no one has an excuse for being unclear as to the protests' target: police brutality against African Americans. It's that simple.

Kaepernick, then a member of the San Francisco 49ers, explicitly stated this back then, saying,

"I am not going to stand up to show pride in a flag for a country that oppresses Black people and people of color...there are bodies in the street and people getting paid leave and getting away with murder."

Protests are not about disdain for the flag or the country, but rather a desire to see a better country for all who call it home.

Remember that the United States was born out of protest.

Protests by varying methods have been a fundamental part of our country since its eighteenth-century conception. Two organizations, the Sons of Liberty and Daughters of Liberty, were founded in 1765 to combat suppressive acts passed by British Parliament via boycott. Protests of a British rule turned violent in 1768 when rioters took to the streets of Boston to protest Britain's capturing of a ship owned by John Hancock, and they turned violent again when Americans harassed British troops which resulted in the Boston Massacre.

Contrast those protests, absolutely warranted, to today's protests at sporting events. A major difference is that these are not turning violent and two of the aforementioned did. So if the country was literally born out of protest of oppression (one that went the distance and turned into a war), what is so wrong with the same protest of oppression nearly four hundred years? While some consider taking a knee in protest disrespectful, it's actually one of the more respectful and peaceful forms of protest our country has ever witnessed.

Perhaps a monumental reason Kaepernick's intended message did not resonate effectively was due to the efforts of President Donald Trump to skew it as if the quarterback meant to disrespect the military and the flag. So, let's make it clear once again: "I am not going to stand up to show pride in a flag for a country that oppresses Black people and people of color." The reason the former 49er took a stand by taking a knee was to raise awareness of the systemic injustices that people of color have had to endure for on this continent for well over four hundred years.

The president has weighed in again on the protests, tweeting on July 21,

"Looking forward to live sports, but any time I witness a player kneeling during the National Anthem, a sign of great disrespect for our Country and our Flag, the game is over for me!"

If this is just his opinion, then all is well. Nevertheless, as someone who holds such a high office, he should not be allowed to misrepresent a person's message, as he has done since 2016. What has, and is still, transpiring is that the President does not seem to grasp the fact that the players are kneeling in protest, not for the hell of it, which would be disrespectful, rendering him either uninformed or willfully ignorant.

So if the president is either uninformed or willfully ignorant on this topic, why listen to him and let him muddle the message yet again four years later?

Let's talk about the real issue at hand.

The most important step in a protesting society is bringing about the necessary change and this change starts when we talk about the real issue: systemic racism and social injustice. The first three steps give such a conversation a framework: the protesting athletes, by and large, are American citizens that have been wronged in one way or another and are exercising a Constitutional right of protest. These protests are because of social injustices, not the flag or the military. Protesting is not anti-American, but rather American at its core.

Let's talk about those things, not the National Anthem. Let's focus on the beauty of the country and that it allows for such demonstrations while simultaneously realizing that there are grievous things that need to change. Lastly, let's ignore those that are misinformed and sow misrepresentation of the topic at hand, including those who hold high office in our country. If we, as a society, can do these things, we would be responding better now than we did in 2016. Love your country or leave it is not the way America has ever done things.

Love your country, and change it for the better!