Kathy Griffin Is Getting Ahead Of Herself
Odyssey

Kathy Griffin Is Getting Ahead Of Herself

Allodoxaphobia among many left-wing progressives in this nation, including Kathy Griffin. 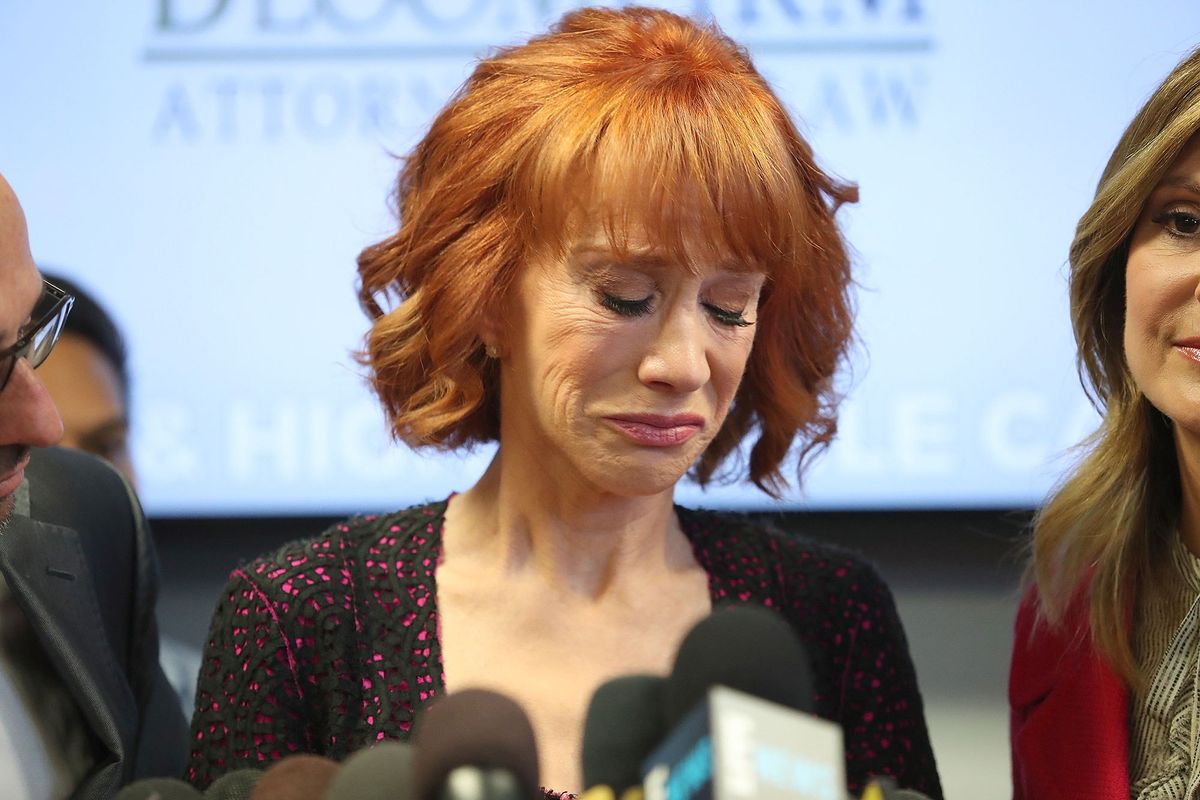 This past week, I saw one of the most barbaric forms of political protest that has ever come about short of killing people. The protest in question, comedian Kathy Griffin who stood with a severed head of President Donald Trump in hand seemingly, to promote “comedy”. How was this comedy? I was relieved to see that more than just conservatives thought that this act was outrageous, as many liberals said she took her actions too far. However, even after the backlash this didn’t stop Mrs. Griffin from blaming Trump for her actions; yes your senses are not playing tricks on you, she tried to blame President Trump for the reaction she received from the pre-calculated stunt she pulled.

She is acting as though she is the victim, being harassed by a U.S. population who thought her behavior was beyond the pale, holding a dummy severed head up of the President of the United States. To say that the people who called her out on her gruesome act are now “bullies” is comical and disgusting, and fortunately gave her no air cover.

To say that this is covered by free speech is a grey area and should be further investigated. As provided by the U.S. Constitution, all individuals have the right to speak out against the president for any reason. According to the Supreme Court, symbolic speech is covered by the right of free speech. However, the Supreme Court has also deemed actions not covered by freedom of speech as, “To incite actions that would harm others” (shouting fire in a crowded theater) as well as “To make or distribute obscene materials.” What is defined as an “obscene material” you ask? According to 18 U.S. Code § 1461, obscene materials are defined as, “Every article or thing designed, adapted, or intended for producing abortion, or for any indecent or immoral use.” Also worth noting is that “indecent” is defined as, “includes matter of a character tending to incite arson, murder, or assassination.” Therefore, there are multiple Supreme Court decisions that ruled against what Mrs. Griffin did as constituting freedom of Speech.

This is not the first time that the intolerant barbaric left has incited or been involved in criminal behavior to make an ideological point over the past several months since Donald Trump took office. The protests (riots) at UC Berkeley against conservative speaker Milo Yiannopoulos was a blatant censorship of freedom of speech by a leftwing activists. According to CNN, “Black-clad protesters wearing masks threw commercial-grade fireworks and rocks at police. Some even hurled Molotov cocktails that ignited fires. They also smashed windows of the student union center on the Berkeley campus where the Yiannopoulos event was to be held. At least six people were injured.” This has been a common trend among Universities and Colleges, as when they schedule conservative speakers; the school erupts in protests, which many times turn violent. The Berkeley riot caused $100,000 worth of property damage as well as set a standard in Berkeley for keeping differing opinions out. UC Berkeley also cancelled accomplished conservative speaker Ann Coulter’s speaking appearance over safety concerns, which prompted protesters to show up anyways. These acts show that the "tolerant" left is not as tolerant as they make themselves out to be.

This new trend of censoring conservative speech because it is “hate filled” and “bigoted” is absurd and should be troubling for all Americans. A link to my previous article titled "When Name Calling Becomes Dangerous" explaining why the argument that Conservative values are hateful and bigoted is complete and utter hogwash. The authors of the U.S. Constitution didn’t define Freedom of Speech with a set of words that are acceptable. There was no thought of an ex parte magistrate as the word police.

We should all have the right to protest. Protest against Donald Trump and his policies as well as the conservative viewpoint, so long as the protestors are not breaking any local, state or federal ordinances or laws or threatening or causing bodily harm to members of the opposition. I believe that peaceful protest makes this country great and builds national character. Any form of censorship on either side defeats the cause and rights that so many have fought and died to protect. When someone like Kathy Griffin comes along and shows a model severed head of the President of the United States, it delegitimizes her and the progressive left’s entire argument. Also, it is a disgusting parallel to the methods used by the Islamic State to behead American and European journalists. I think the moral of the story here is that we should think about what we say and do before we make a decision we will come to regret.