Anxious, reserved perfectionist + bisexual, polyamorous feminist = the most binge-worthy show on the Internet. 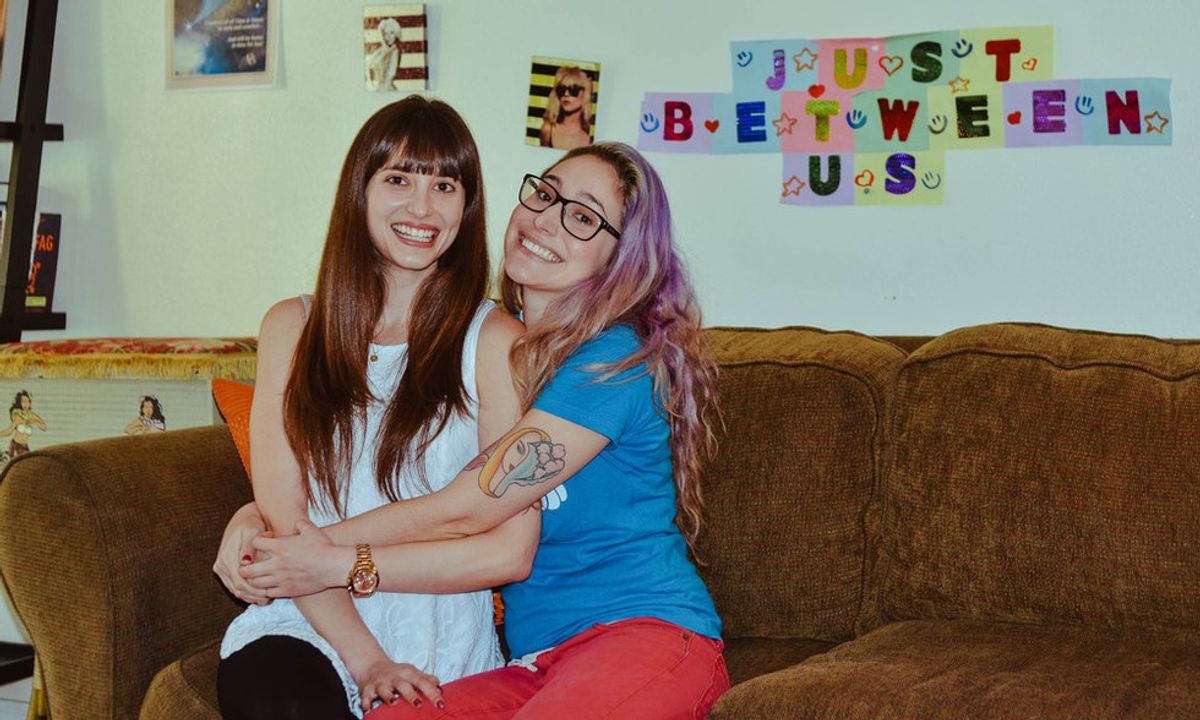 Odd comedy couple as well as best friends Allison Raskin and Gaby Dunn have been making comedy videos on their YouTube channel “Just Between Us” since April of 2014. You may recognize them from BuzzFeed Video, where they used to work before leaving to pursue their own endeavors full-time. If you have not kept up with them post-BuzzFeed, you are missing out.

“Just Between Us” is a show based on Allison and Gaby’s hilariously relatable odd couple dynamic. Allison is a neurotic perfectionist who is desperate to be married, has OCD, and is kind of afraid of sex. Gaby is bisexual, polyamorous, belligerent, and outgoing. Somehow they balance each other out as best friends, creating the perfect female and dynamic comedy duo. But “Just Between Us” takes their differences a step further, as Allison and Gaby play the “worst versions” of themselves, or exaggerated caricatures of who they are.

The heightened characters that Allison and Gaby play in “Just Between Us” are perfected for comic effect and highlight their contrasting personalities. Allison is scripted as simultaneously terrible at dating yet desperate for marriage, and her mental illness is used freely to accentuate her dating anxiety, self-esteem issues, and reserve in comparison to Gaby. The exaggerated on-screen Gaby is an overly confident, sexually liberal, militant feminist. Their banter throughout the show often revolves around their drastically different love lives, worries, and overall personalities.

“Just Between Us” releases two videos a week: a (bad) advice show and an original comedy sketch. Their description for the channel reads, “Tune in on Mondays for their weekly dating advice show. You will learn nothing. Tune in on Thursdays for an original sketch. You will also learn nothing.” For the advice portion, Allison and Gaby sit on a couch, a construction paper “Just Between Us” sign hung on the apartment wall behind them, and read a viewer’s question before veering to tangential topics and rarely giving real advice at all. Their banter is rife with jokes and disagreements on the question. The original sketches cover any number of topics from Gaby’s plan to get fit or die trying, to figure out if a girl is gay, and to discuss Allison’s bachelorette audition.

At its core, "Just Between Us" is a scripted comedy channel, not an advice show. While some moments are spontaneous, the overall arc of each episode is scripted. From the advice portions to the sketches, Allison and Gaby know very well what they are doing with each character, what jokes to deliver, and even how they should sit on the couch--Allison straight-backed and Gaby manspreading.

Even though the show is scripted, it is saturated in realness. This is the benefit of using caricatures of themselves--Allison and Gaby are believable, self-aware, and hilarious all at once. Their characters allow them to use an advice show as a pretense for comedy and still make a greater statement; Allison’s character is oftentimes a commentary on the societal expectations of women. Allison’s OCD, Gaby’s feminism, and their strong friendship really only make them more endearing.

The authenticity of “Just Between Us” also lends it to flow easily. The show, whether on the advice segment or the sketches never has a dull moment. It jumps from natural banter between the pair to perfectly timed jokes and you cannot tear your eyes from the screen. The viewer is drawn into the world they create, and while the show is different from vlogging, it has the same relatability effect to a viewer.

With its living room set, “Just Between Us” is low-key enough that you may not consider its genius. But do not be fooled. Allison and Gaby know what they are doing; they know how to write and deliver jokes, how to best play on their differences, and how to make the show seem effortless though it is actually scripted for best comic effect.

No doubt about it, Allison and Gaby are funny. Like laugh out loud, smile-like-a-fool-at-your-computer-screen funny. This comedy pair is a force to be reckoned with. Their production quality is only improving, their sketches are becoming more elaborate, and their characters are established. The weekly advice show could either drop a nugget of wisdom or convey nothing helpful at all; even so, I would still watch every second.

Between you and me, “Just Between Us” is the show everyone should be binge-watching.