Is 'New Girl's' Jessica Day A Feminist? Yes, Yes She Is

'New Girl's' Feminism Wears Polka Dots And Pink, And That's Why We Love It

You can have the ribbon collection, and the yarn, and still be one of the best damn feminists on television. 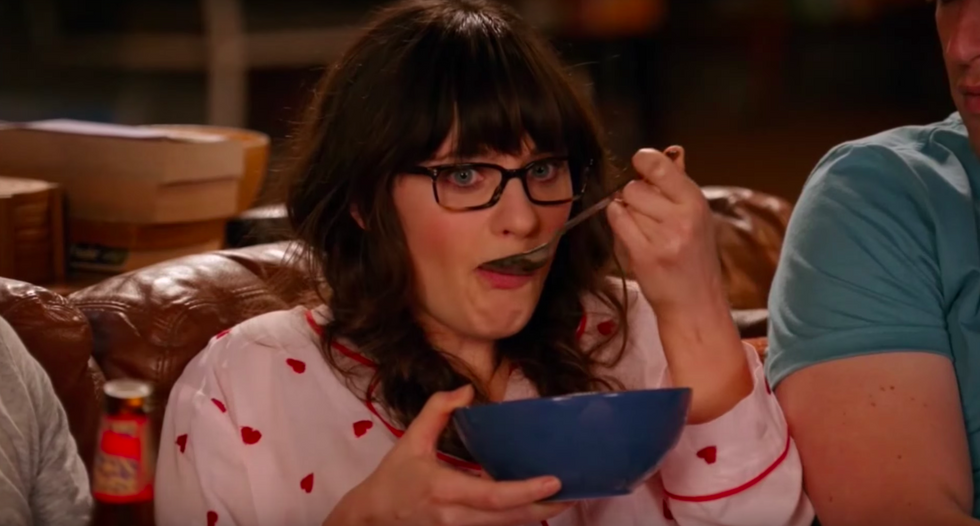 "Ugh, I love purses," Jess said during "Girl Fight," the tenth episode of the fourth season of "New Girl." She follows this statement with, "And that doesn't mean I'm not a feminist either. I'm a damn feminist who loves purses."

Truly, I couldn't have put it any better myself.

Jessica Day from FOX's "New Girl" is a Portlandian, a schoolteacher, a theme-song-singer, a lover of ribbons and one of the best damn feminists on television.

She brakes for birds, knits in her spare time and has a really weird thing about people messing with her yarn. And for this, she shows a nuanced, textured copy of feminism. Because even though she does all of those things (and bakes a mean batch of cookies, too), she's still badass — even being the complete opposite of what badass traditionally is.

She put it best while discussing her love of purses: "Where else am I supposed to keep my feminist writings?"

Like Jess explains in the episode "Jess and Julia," even though she's all of these things, that doesn't mean she isn't tough. She is who she is, and certain characteristics of hers should never loom bigger than others.

I mean, let's be real, the label of feminist is sometimes a little restrictive, thanks to the stereotypes people have. Traditionally, don't we view them with a hardness to them, a cooler sheen to their exteriors? Basically, the total opposite of Jess Day.

And if you really think about it, all Jess wants is to escape the limits of the stereotypes placed on her. Sounds familiar.

This is, in part, is the reason I love Jess Day so much. She's a unique character, weird as hell and totally herself.

In fact, part of the reason she's written so authentically is that she's loosely based on Liz Meriwether's own personality. Meriwether even received backlash during the first season of "New Girl," centered on the fact that Jess is supposedly "too girly," which makes her a stereotype.

Some see the episode "Jess and Julia" as Meriwether's response to those critics, but this remains unconfirmed. But no matter the reason for the episode, it was 30 minutes filled with a light, funny take to feminism. And it demonstrated how women choose to act most authentically for themselves.

Because, let's be real: If Jess Day can do it wearing ballet flats, hell if we can't try to.

television streaming
Report this Content
This article has not been reviewed by Odyssey HQ and solely reflects the ideas and opinions of the creator.
Swoon

'Glee' May Be Over, But These 10 Brittany S. Pierce One-Liners Will Live On Forever

The 7 Stages Of Your Fall Semester, Based On Ross Geller's Everchanging Hairstyles

You're Never Too Old To Watch Cartoons, Don't Let Anybody Tell You Otherwise