Why Disney Female Villains Are Iconic Feminists
Odyssey
CurrentlySwoonLifestyleHealth & WellnessStudent LifeContent InspirationEntertainmentPolitics and ActivismSportsAdulting
About usAdvertiseTermsPrivacyDMCAContact us
® 2023 ODYSSEY
Welcome back
Sign in to comment to your favorite stories, participate in your community and interact with your friends
or
LOG IN WITH FACEBOOK
No account? Create one
Start writing a post
Entertainment

It's good to be bad. 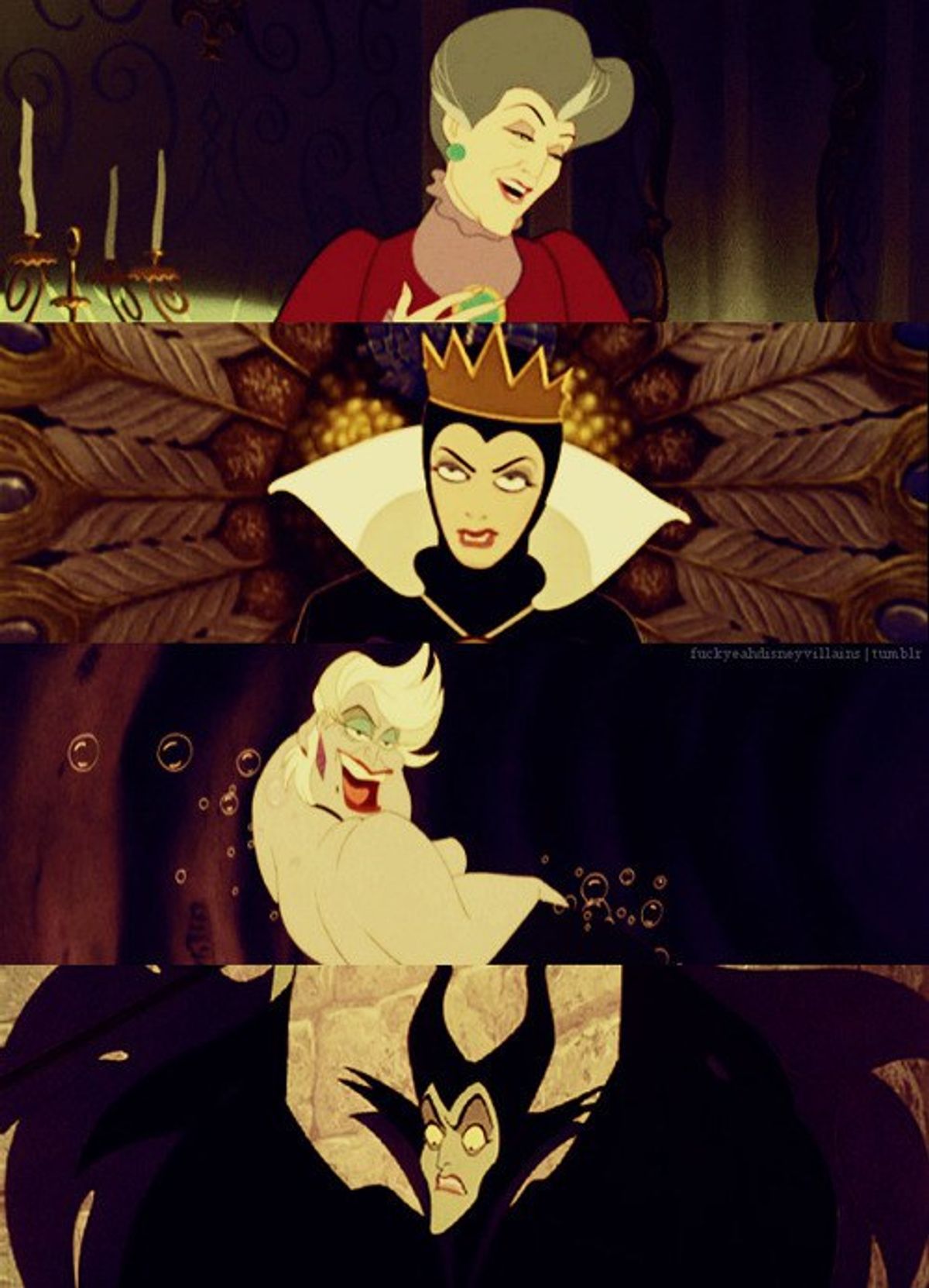 The mermaid marries her prince, the maid goes to the ball, and the sleeping princess gets her kingdom. The Little Mermaid, Cinderella, and Sleeping Beauty are iconic Disney princesses who are well known and loved. Disney princesses are looked up to and admired by many girls around the globe who want to have a similar happily ever after ending to their life stories. In those same stories, villains who are central to the story try to destroy the princesses’ chances of obtaining happiness. Many of the infamous villains of Disney are women, such as, Ursula the sea witch, who takes Ariel’s voice, and Cinderella’s evil stepmother who makes Cinderella do harsh and strenuous chores while stripping her of her freedom, and Maleficent, the evil fairy queen that puts a curse on Aurora to put her in a deep sleep. However, the princesses that are widely known around the world even to this day do not have a strong connection with the modern world. I, for one never really cared for being a princess and my eyes were always on the villains. In today’s modern times, women no longer sit and cater to the men or wait to be rescued; women of today take charge and have control of their lives. For this reason, the independent, outspoken, and goal-driven female villains of Disney fairy tales are easier to identify with than the traditional princesses.

In today’s society, the villains of the story resemble more of women now than the princesses. Women of today no longer just tend to the family and husbands, but are independent, outspoken, driven, and hardworking. The evil queens/villains have so much more of these attributes than the princesses. Ursula, Maleficent, and the Evil Stepmother embody strength, outspokenness, independence, and other attributes found in women of today. Ursula portrays a bold business woman, not being afraid to show off her curves and use them, which defies the typical standards of beauty by also being a full figured woman. In today’s media, women with a full figured body are now being praised more than the woman back in the past of being thin; for example, celebrities and artists like Nicki Minaj and Kim Kardashian.

Maleficent, the evil fairy that cursed Aurora, is independent since she is the queen of all fairies. Some other modern characteristics that are seen frequently today would be for a woman to always speak up, work hard, and to not just sit and wait for good things to happen magically by having a Godmother solving all our problems but, to take charge of the situation and change it yourself. All of the villains are outspoken and speak their minds at all times. They are driven to reach a goal to try to achieve what they want. Although the villains of the story do some harsh to the princesses, as in trying to kill her or take over her kingdom, they are more realistic than a Disney princess. Even if it has to get their hands dirty and maybe threaten to kill one or two people (lol), they do not sit and wish for things to happen. Unlike the princesses that have a “damsel in distress” complex, which is when someone else interferes and helps them at the most convenient times, is frequently seen in mostly all the princesses stories. It communicated to young girls that in order to get what you want a man or an outside source will be there to help and does not stress the fact of being independent. In all the stories the princess depends on a man or magical intervention to rescue them and before that happens the princess will mope around and feel hopeless for themselves. It sends the wrong message as well as setting the standard of what beauty is as the cookie cutter figure and behavior. The Cheetah Girls said it best; I rather rescue myself.

Women have come a long way from the past of being treated unfairly and not as equal as a men. Women have come up the ladder of respect and power and are no longer stuck as being a housewife that are expected to do “womanly” duties. In this day and time, women no longer have to be the damsel in distress but, take charge of their own lives. Today, women are in offices, stand as bread winners, and are independent and powerful women. According to Pew Research Center , Today a majority of American women are in the labor force. In 1965, 39% of women ages 16 and older were in the labor force. That share rose steadily and peaked at 60% in 1999. As of November 2014, 57 percent of women were in the labor force, only 12 percentage points lower than the share for men (69 percent). Women account for about half of the U.S. labor force (47 percent in November 2014).

QueenRadhi
The State University of New York at Stony Brook
3179