Is Veganism An Act Of Feminism?

We do not own cows or their udders. 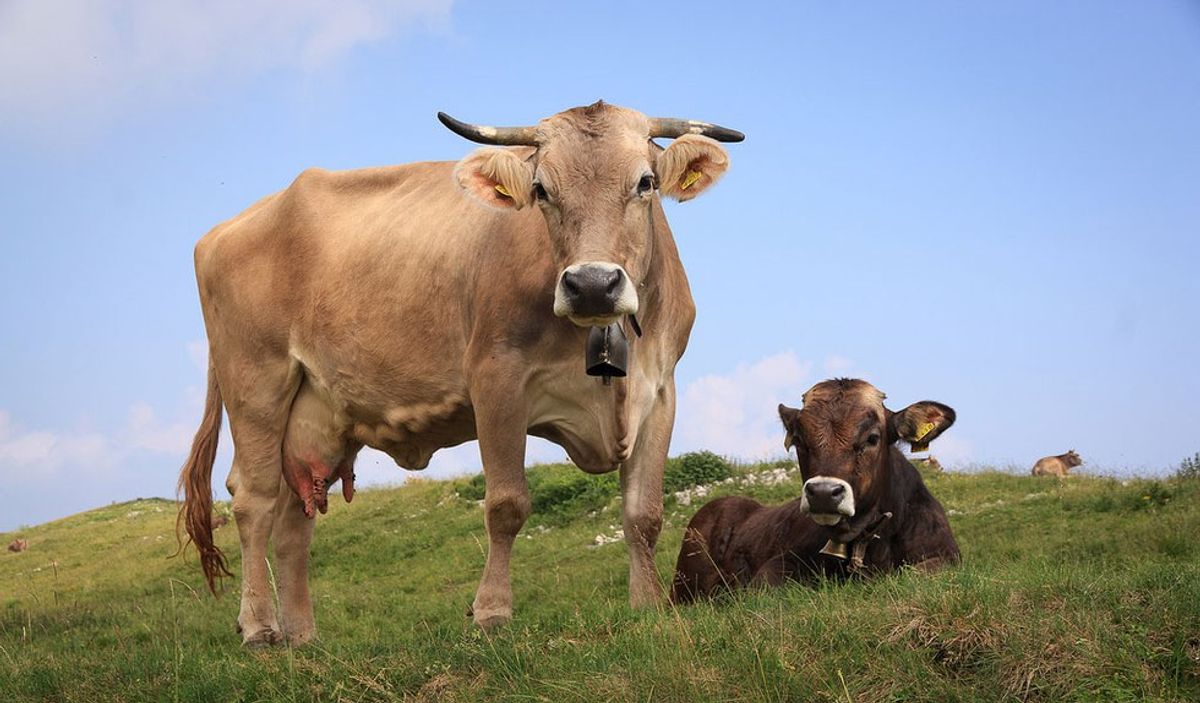 "Why dairy? It doesn't kill the cow."

This is an argument posed to me frequently, often in casual conversation by new acquaintances. Most people can theoretically grasp the idea of vegetarianism: steak is literally a piece of a dead animal, and nobody would deny that fact. However, dairy consumption does not directly require slaughter, so where's the harm?

First of all, the idea that it doesn't kill them is questionable: the modern dairy cow lives an average of about five years, compared to her natural lifespan of twenty years. After several years of constant impregnation, their bodies become economically useless and are slaughtered. Is this really better than what beef cattle experience?

One "humane" farm enthusiast visited an Organic Valley farmer and found out that this farmer milked his cows twice a day--compared to the usual three on most factory farms--and that this resulted in the cows living twice as long, around 10-12 years.

While she celebrates this improvement, the contrast demonstrates just how detrimental the milking process is to the life of a dairy cow. The less the cow is milked by machines, the closer the cow gets to the natural 20 years. Imagine if the only thing taking her milk was the calf it was made for.

For dairy products in particular, it isn't the slaughter that upsets me. In fact, compared to what industrial dairy cows experience during their living days, slaughter almost seems like an escape.

Indeed, if you explore the so-called justification of the dairy or meat industry, you will often find statements similar to those used to rationalize slavery, colonization, systemic racism, transphophia, homophobia, sexism, and others. The main idea is this: We are the chosen one, you are different, and we own you.

As a feminist, I do not condone the exploitation of dairy cows. I do not care that they are not human, for I do not believe that humans are so fantastic that they should be given the freedom to oppress anything and everything within their grasp.

You can apply almost any feminist argument to the dairy industry. For example, let's look at some popular feminist quotes.

“Woman's degradation is in man's idea of his sexual rights. Our religion, laws, customs, are all founded on the belief that woman was made for man.” ― Elizabeth Cady Stanton

The standards of treatment for dairy cows in the United States connotes ownership and profit in every line. Veterinarian care is used to ensure maximum production (more milk is more money), and illnesses are treated to reduce economic loss (a diseased cow is an unprofitable cow). Cows are treated as machines to keep functioning, not animals deserving of comfortable and dignified lives.

And organic ain't much better. The Stonyfield website lists the organic standards for the treatment of dairy cows, which was amusingly on a page entitled 'Your Dairy Meditation.' Okay.

The standards list warm, fuzzy rules such as having access to sunlight, a pasture, and clean bedding. However, the list makes no mention of the actual act of milking, assuming that milking cows for human consumption is just a natural, harmless process that needs no questioning. Humane standards, in this case, appear as a cryptic handbook of how to keep a cow alive and disease-free long enough to exploit her.

These standards do little to address the fact that we are taking something that doesn't belong to us, and that we don't need at all.

“No woman can call herself free who does not control her own body.” ― Margaret Sanger

When we say things like, "But animals were put on this earth for us to use," I think of all the women who have been "used" by men for sex, for power, and for control. Men throughout history (and even some oh-so-delightful fellas today) have said almost the exact same things about women, believing it was the women's responsibility in life to pleasure them, take care of them, have babies for them, and look pretty for them.

Thus, I cannot rationalize the practice of forcing cows into pregnancy, out of motherhood, and into the production of an unnecessary substance for an entirely different species. This is not what they were made for. We are not the owners of them or their udders.

“Do you really believe ... that everything historians tell us about men – or about women – is actually true? You ought to consider the fact that these histories have been written by men, who never tell the truth except by accident.” ― Moderata Fonte

When we rationalize our consumption of dairy (or meat), whose voice is being heard?

Humans decide whether animals are worthy of respect. Humans choose which animals to love (pets), and which to destroy (farm animals). Humans establish, organize, and maintain power over animals, and dairy cows have zero say in the matter.

Throughout history, women were considered "naturally inferior" to men. This was explained by things like smaller brains or less physical strength. Because of this designated inferiority, wives were considered material possessions of the man, and all of her possessions belonged to her husband upon marriage. In the event of abuse, women were not legally allowed to sue their husbands. After divorce, all property and children belonged to the man. This was justified by men, who decided on women's behalf that they did not deserve to live full lives.

Cows can't speak English, but is it that hard to tell what they want? It's not like they're marching up the machines themselves and eagerly hooking themselves up.

But humans decided that the cow's actions are irrelevant because they are an inferior species, designed for our exploitation. How else would the amazing and powerful human get to enjoy his ever-important ice cream cone?