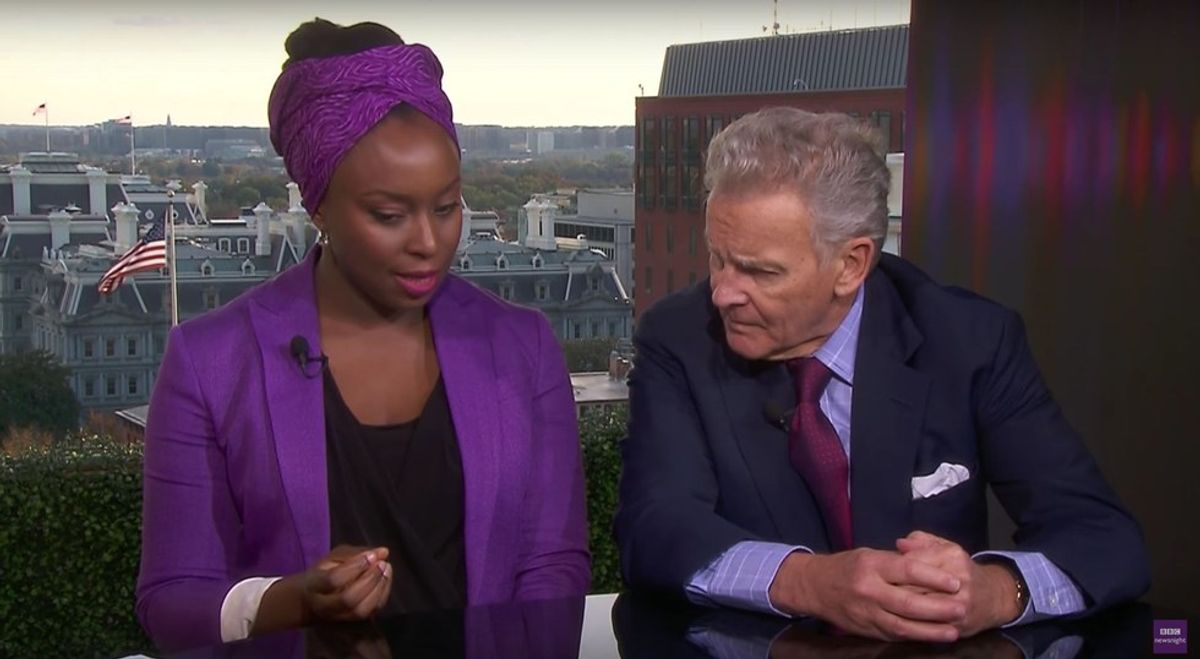 Racism is still with us. But it is up to us to prepare our children for what they have to meet, and hopefully, we shall overcome. ~ Rosa Parks.

I love Chimamanda Ngozi Adichie! I mean I love love love her! As a literary writer, she’s one of the top two writers I emulate and adore when it comes to writing style, description and delivery. Oh Lord! Have you heard her speak? She articulates powerfully, so how can you not love that kind of woman? Still, some people would never fancy her.

Was Chimamanda being racist? This and many more has been the questions racing through my mind since yesterday after watching Chimamanda Ngozi Aidchie versus R. Emmett Tyrrell on BBC Newsnight on the topic Is Donald Trump racist? Did I mention the fact that I had to watch that part of the clip that has become a topic for conversation on virtually all social media platforms over and over again so it could resonate.

Moving forward, Chimamanda on the BBC Newsnight show had said “I am sorry. . . but if you are a white man, you don’t get to define what racism is.” And the man said “I can’t even open my mouth here because I’m a white male” and that response of Chimamanda's has been taken to be racist.

First, what is racism? Racism simply put according to Merriam Webster is the belief that some races of people are better than the others. In another way, racism is the poor treatment of or violence against people because of their race.

Well, I think differently as regards Chimamanda’s statement. I see reasons with her. I understand what she meant by telling that man that he doesn’t get to define what racism is because he’s a white man. I do not think she sounded rude or racist, I think she was only trying to tell Tyrrell he hasn’t or may not have been a victim so he doesn’t have the experience or understanding to draw conclusions. A white man doesn’t have to deal with those kind of prejudices when it comes to how the system works and not when he’s dealing with a fellow white man. I have read, heard and watch films/clips about racism. Where should I start from? 12 years a slave, Selma, etc. I’ve read stuffs like is she saying black men can’t be racist too? Of course yes! Throughout all ages, the white has always been the dominant race; so forgive Chimamanda when she says the white privileged man doesn’t get to define racism.

A lot of people do not have a clue of what racism and white supremacy means and what it does and that alone is very sad.

So you’re saying blacks can’t be racist too?
Yes, I’m saying that because a subjugated group cannot be racist 'cos to be racist, you’ve got to have power and privilege and that is what a white man has especially when it comes to American history. It’s like the melanin is a disadvantage to the black man. A black man gets shot dead in a traffic stop but the white man involved in an actual shoot-out gets stunned and taken in alive and that’s all. We operate in a system that makes it very hard for a black man to succeed over her white counterpart.

Justice for this, justice for that, Black lives matter because everyday black lives don’t seem to matter. There is Trayvon Martin, the African-American teen who got shot dead; there is Michael Brown, Eric Garner, Sandra Bland; they and many more are the reasons we’d continue to remember that the system is not in favour of the blacks.

How many times have you seen White lives matter? We can continue to name or brand Chimamanda what she’s not or we can take a critical look into the system and acknowledge that the American President-elect is racist, an ardent supporter of white supremacy and a trash talker. A man whose company has been sued twice for not renting to black people, someone who was bold enough to question whether Obama was born in the United States, someone who trashed Native Americans, even went ahead to encourage the mob justice that resulted in the wrongful imprisonment of the Central Park Five, he called supporters who beat up a homeless Latino man “passionate” and yea, he condoned the beating of a Black Lives Matter Prostester. . . Gosh! And you still want to tell me Donald Trump is not racist? I give up!

We can keep denying all we want or we can pray that our worst fear be turned into praise!