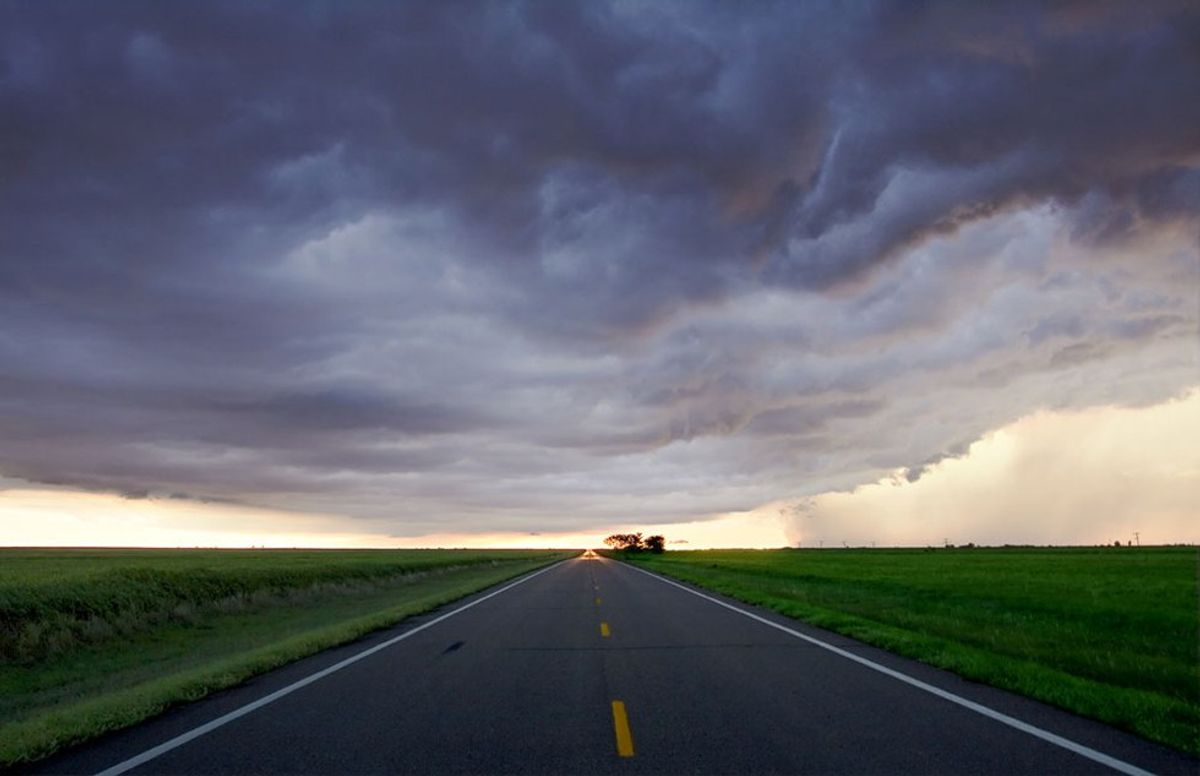 We are driving east on Interstate 70 in a freshly-waxed, red, '68 Shelby Mustang convertible with the hood down. The needle on the speedometer hits 90, for it is quite easy to get carried away when driving on the open roads of Kansas, the "Great American Desert." The sky is clear and baby blue with only a single puffy white cloud floating across it, like a boat sailing into the sunset.

With the music blasting, my friends and I take Eric's Shelby for a joyride; after all, it is my birthday! The fiery sun, as bright as burning magnesium, acts like a halo always shining right above our heads. Beautiful seas of endless wheat turn the never-ending Kansas prairies golden. Every now and then, grasslands spring up like pictures from a pop-up book, sprinkled with wildflowers that give off a fulfilling aroma. I close my eyes and, like a sponge, I take the time to soak in everything around me. As the wind blows, my long blonde hair whips my face as if it were the back of a workhorse. The gentle humming of big iron machines rolling through the fields sing me a lullaby. The temperature is comfortably cozy, like the inside of a house warmed by a hearth in the dead of winter. With my eyes closed, memories of the weekend come streaming in like confetti on New Year's. I am floating on cloud nine, enraptured, delighted. A little overwhelmed with this ethereal sensation, I take a deep breath in, but instead of smelling a sweet aroma, a strange grassy smell has seemed to take its place.

Out of nowhere a loud, ominous rumble slithers across the sky, infinitely disrupting all of the peace, joy and happiness I was feeling. My blue eyes flash open, wide and alert, fierce and dark like the sky I see, which is now buried beneath the thick layers of clouds. We all notice a vehement storm begin to develop far off to our right; luckily we are not close enough for it to take us prisoners. We slow the car down anyway, so as to register this inconceivable spectacle of nature. Gradually, a dark funnel forms in the clouds, waving around like an elephant's trunk, and out of the blue a menacing tornado screams across the land. Lightning zigzags at the heart of this cyclone, and destruction follows, faster than a hummingbird's heartbeat. Trees look as if they are trying to run away, bending and struggling against the tremendous forces of nature. A house that had once stood firm and tall, as if it were an invincible god, has now been shattered into a million wooden splinters. The straw from the many hay bales has been driven into wooden boards like nails. This whirlwind is petrifying to watch but mesmerizing all the same. As it rips through cement, concrete, bridges, anything that stands in its way, it tosses animals, street signs, houses, and buildings miles away. All enthralled in the previously unseen and unexperienced nature of this twister, we forget that we're still on the highway in Eric's '68 Shelby Mustang going 30 mph. After a minute or two, the mighty beast seems to be giving in and is suddenly engulfed back into its home in the sky, and we are left with the tranquility of the open roads of Kansas, taken from us not moments ago, and interrupted not a minute later, but this time it is by the honking of an eighteen-wheeler coming at us head-on!

That was the last time I ever heard the voices of two of my best friends, right before I blacked out.

I was told later that my only surviving friend and I had been tossed from the convertible. She severed her left hand and broke several vertebrae in her back. Presently, she has a prosthetic hand and has limited mobility but is still able to get around, although she tells me the nightmares and flashbacks she has from that day are more debilitating than her injuries. I know what she means because I get them too. I, Catherine Wheelock, super-star high-school competitive runner, recently turned 21, having only completed one out of the many marathons I wished to tackle; I shattered my entire right leg. I was told there was no way to fix it, even if I were to undergo surgery - "The bones are so far out of place, they will never heal properly. It would more beneficial for the leg to be amputated, Catherine. Do you understand? You will never be able to run again. I'm terribly sorry..." These words have pierced me day in and day out ever since I agreed to have the amputation. Recovery has not been an easy road, and six months after the accident, I still struggled everyday with the competitive drive inside me telling me, at 5am, it was time for my seven-mile morning run. But the thing I struggled with most of all was the denial; I was in denial about not being able to walk or run again, and I started to lose my way and developed severe depression.

At Ashley's funeral,l I was given a new lease on life. While sitting there, trying not to think about that tragic day, I looked up and saw my high school track coach standing off to the side. I was surprised to see him there because Ashley was not a member of the track team in high school. I felt I had to go talk to him and ask why he came. Following the ceremony, I wheeled my way over to him and he just looked at me the way he did right before all of our meets, a genuine smile on his face and a fire in his eyes that always got me ready to go. Typical unselfish me, I asked him how the team was this year and how my young prodigy Emma was doing. It was a relatively light conversation until we fell into silence for several minutes. Tears began to well up in my eyes as I remembered running across the finish line during my last ever high school cross-country meet. I remember the wind in my face, the smile stemming my coach's face from ear to ear, the crowd roaring loud like a jet engine, my dad clapping his hands and my mom jumping up and down like a child about to be given candy! I looked up at my coach and said, "Competitive running has been my whole life, Coach. I will stop at nothing to be able to feel the way it does when crossing that finish line."

He knelt down and I will never forget what he said to me. "I know you won't Catherine! The fire you have, the determination, and your positive attitude are all reasons why I know you will get back out there, because for you, impossible is nothing and nothing is impossible! I wish you the very best of luck Cat! Take care of yourself." With that he gave me a familiar pat on the shoulder and walked away.

Today, I actively compete in marathons in cities all around the United States. Each time I cross that line, I get the same exact feelings of happiness, accomplishment, and exhaustion that I once did back in high school. The only difference now is that I wheel, instead of run! If you put your mind to it, impossible really is nothing but a word.