Feminist Quotations You Haven't Heard Before 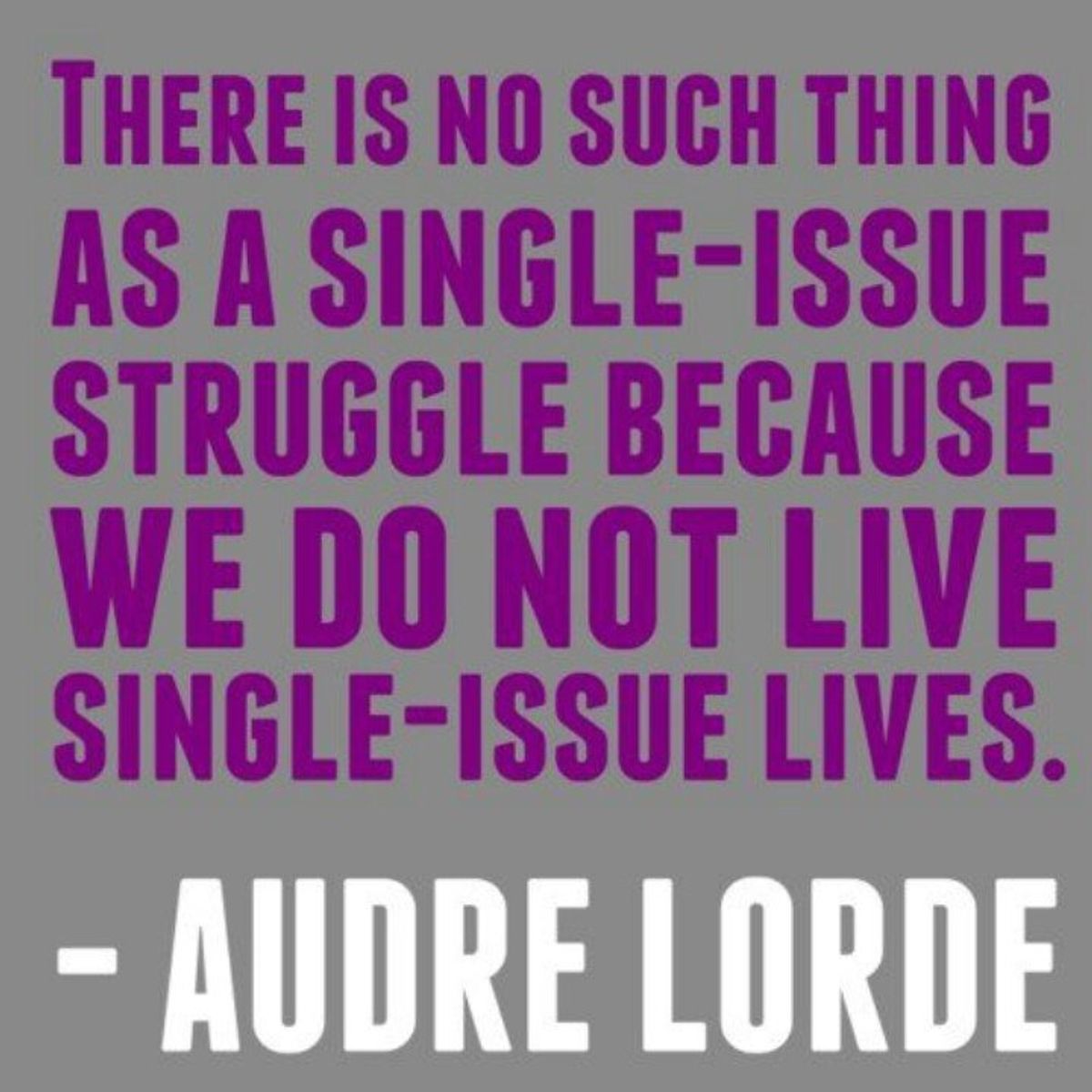 Okay, Google... we have a problem. Earlier this month when I was in need of some motivation in my invigorated efforts to be a more outspoken feminist ally, I began googling "inspirational feminist quotes".

Google gave me mostly 'white feminist' results. (White feminists are those women who ignore and belittle intersections of identity like race, class, disability that affect women who aren't middle-class white women.) So I've made an effort to find some quotations that weren't said or written by the white female leaders that everybody thinks of when "feminism" is mentioned.

Please note, I'm not trying to discount the achievements of white wealthier American feminist women of the 19th and 20th centuries, they definitely got the ball rolling. However, I think it's important to lift up voices of those women who were/are marginalized based on their intersecting identities and who are usually forgotten by the history books and practically everybody else.

1. “I don't know any more about the future than you do. I hope that it will be full of work, because I have come to know by experience that work is the nearest thing to happiness that I can find."

2. Nothing is worth more than laughter. It is strength to laugh and to abandon oneself, to be light. Tragedy is the most ridiculous thing.”

Frida Kahlo was a Mexican painter who challenged art, beauty and political norms from her bedroom where she mostly resided due to chronic pain.

3. “Culture does not make people. People make culture. If it is true that the full humanity of women is not our culture, then we can and must make it our culture.”

This is from Chimamanda Ngozi Adichie's feminist primer, We Should All Be Feminists. If you read nothing else, by these inspirational women, read Adichie's book!

4. “For me, forgiveness and compassion are always linked: how do we hold people accountable for wrongdoing and yet at the same time remain in touch with their humanity enough to believe in their capacity to be transformed?”

That was so poignant. Please reread and reflect for a moment. Bell hooks is the pen name of Gloria Jean Watkins who is a feminist writer who contributed significantly to the feminist enlightenment of so many of my friends and myself.

5. “Racism should never have happened and so you don't get a cookie for reducing it.”

A snappy yet sobering reminder for white allies from the great Chimamanda Ngozi Adichie.

6. “The process begins with the individual woman’s acceptance that American women, without exception, are socialized to be racist, classist and sexist, in varying degrees, and that labeling ourselves feminists does not change the fact that we must consciously work to rid ourselves of the legacy of negative socialization.”

A powerful reminder from bell hooks that "feminist" is more than a label.

Audre Lorde described herself as a “black, lesbian, mother, warrior, poet”. From what little I know about her, it makes me want to read everything she ever wrote.

8. "I demanded more rights for women because I know what women had to put up with."

Evita Peron was Argentina's most beloved first lady who advocated for women's rights in her husband's administration. She grew up impoverished as an illegitimate daughter of a wealthier man which was a difficult position to be in Argentine society.

Tillmon was a welfare reform activist who worked to convince white feminists that poverty was a woman's issue in particular and should be given feminist attention. I picked this particular quote of hers because it really defines what intersectional feminism is all about in a truly poetic way.

10 . "The struggle is inner: Chicano, indio, American Indian, mojado, mexicano, immigrant Latino, Anglo in power, working class Anglo, Black, Asian--our psyches resemble the bordertowns and are populated by the same people. The struggle has always been inner, and is played out in outer terrains.....Nothing happens in the "real" world unless it first happens in the images in our heads.

Gloria E. Anzaldúa was a feminist theorist and poet who explored the intersections of Chicana, queer and female identity.

Here's another snippet of poetic prose from Gloria E. Anzaldúa. I know very little about her, but I now want to read her book. That's the beautiful thing about taking a few steps out of your intellectual comfort zone, as I did with this quotation search. You get to discover so much about yourself and humanity.

I'm going to let those powerful words stand on their own. If you want to know more about McCoy who's a contemporary black womanist, check out this interview.

Julia de Burgos was a poet and beloved Puerto Rican politician. We read one of her poems in my high school Spanish class.

14. “Walk the street with us into history. Get off the sidewalk.”

This particular quotation gives me goosebumps. Dolores Huerta was a labor organizer who worked tirelessly along Caesar Chavez and advocated in particular for female migrant workers.

15. “I will keep writing about these intersections as a writer and a teacher, as a black woman, as a bad feminist, until I no longer feel like what I want is impossible. I no longer want to believe that these problems are too complex for us to make sense of them.”

Roxane Gay is a English professor and feminist writer. Go read her book Bad Feminist, it's funny and poignant at the same time.

16. “You may encounter many defeats, but you must not be defeated. In fact, it may be necessary to encounter the defeats, so you can know who you are, what you can rise from, how you can still come out of it.”

Maya Angelou was an American poet and civil rights activist. Again, her poetic awesomeness makes me want to read everything she's ever written!

Well, folks, I hope you've been suitably inspired by feminist wisdom. Go out and be intersectional feminists and get reading the work of these inspirational women. You can never read too much feminism ;)