The Indianapolis 500 Is The Greatest Sporting Event Every Year
Odyssey

The Indianapolis 500 Is The Greatest Sporting Event Every Year

Another year at the track has passed, and I couldn't have been happier to be there 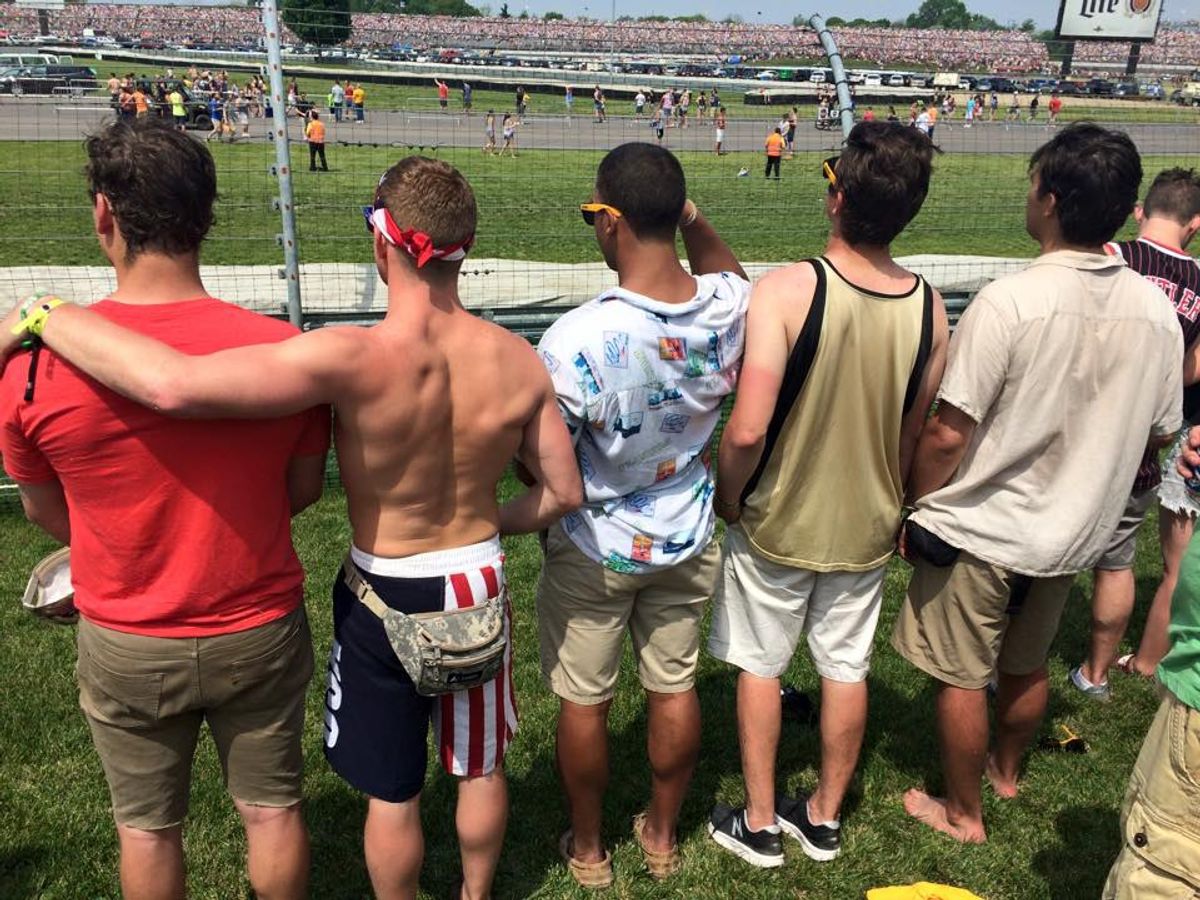 My sunburn is now peeling, and my body is fully recovered, finally. It’s been a week since the 100th running of the Indianapolis 500, and I’m already looking forward to next year. The great Mark Titus has referred to the Indy 500 as Midwestern Christmas, as I fell asleep Friday night back home after a night at bars with some high school friends that are exactly how I felt, like a little kid before Christmas. I was broke, had no ticket or a plan but I knew I would make it on the track and have a great time somehow. I was staying at my best friend’s house that night, he was headed back up to school that Monday, any other weekend I would have hung around and kicked it with him, but it was Indy and I knew if I stayed in Clark County I would regret it. So I hit the road early Saturday morning to meet up with some friends that I would be riding with, tailgating with, and watching the pinnacle of racing with.

The race was not until Sunday which means Saturday is spent tailgating with the other diehards in the famous Coke-Cola lot. If there is one thing I missed out on when making the decision to go to a small liberal arts school, it was the weekly tailgating for big-time college football. Instead, I grasp for events to tailgate, like club hockey games, which is a brutal existence. Knowing this, when I get to go to a large event like Indy or a Jimmy Buffet concert and spend the whole day grilling meat, and playing posties, I really savor the hell out of it.

Sunday morning came and we headed to the track. The race didn’t start till noon but the gates open 6 A.M. and we weren’t going to miss out on any of the experience, and I still needed to buy a ticket. This year was the 100th running and somehow that meant the entire race was sold out. Usually, anyone can show up to the speedway and buy a general admission ticket for forty dollars and get in the track, but this year that wasn’t the case. General admission tickets were going for an average of $150 dollars on the secondary market leading up to the race. I did not have that much money. I set a price in my head and went up to a couple scalpers to haggle with them, and after a couple heated exchanges, I won out and paid 80 bucks to be able to sit in the sun for the next 8 hours and listen to cars go by.

While that was one hurdle cleared, another far less important one awaited me once we entered the track. My friends had planned ahead and bought wristbands to stay in the Snake Pit for the entirety of the race. The Snake Pit is an area just inside turn three that is a large scale EDM concert. That is right, while the greatest race in the world is happening thousands of people rather listen to Skrillex. Not my scene at all, but friends are friends and I mixed amongst the crowd as we entered the ropes of the snake pit and I got in without the wristband.

I stayed for 3 long hours, which is more than anyone should, as the race began I left knowing I would not be able to get back in, I was okay with that, there was racing to watch. I spend the entirety of the race walking around the infield sitting on spectator hills, meeting strangers and loving every moment of it. My sister and her boyfriend were also at the race but they had seats somewhere in the grandstands which compared to where I was might as well have been Mars.

Near the end of the race I found myself sitting on a stack of tires watching the race from a large video screen and hearing the cars zip by around me. I looked behind me I and saw what looked like Mathew Mcconaughey’s character from Mud asleep behind me. Only at the Indy 500.

The race ended, American rookie driver Alexander Rossi won, and I and three hundred thousand people left the speedway. On the way back to the Coke-Cola lot I was walking through the residential streets surrounding the track I ran into my cousin’s husband who goes to the Indy 500 every year. He coaches basketball at Northern Illinois, His father is a doctor, he sits in the grandstands. At this moment the two sides of the Indy 500 met. Me, sunburnt, wearing a shirt that proclaimed the first Michelob Ultra would be on me, and the dirtiest hat you’ve ever seen with my fraternity’s letters. Him a clean white polo sunglasses and libation in hand. We spoke briefly about the race, and how exciting it was. He asked where I was staying and I explained my two-day tailgating experience and how I was ready to be home. He assured me that is the way to do it while I was young, and with that we bid each other goodbye.

As the crew packed up and we hit the road, another year at Indy had passed by. Many of the guys I spent the weekend with were friends from my time in Chicago. Seeing them took me back to the time I spent there. We picked up right where we left off and it felt like no time had passed. I don’t know when I’ll see them next. Life gets busy as you get older, and seeing friends becomes harder, but big weekends like Indy call for such reunions.

Even though I’m a huge race fan the real fun and joy of going to the race comes from being with the people I go with year after year. Friendships that are so strong that make me do crazy things like subject myself to an EDM concert, but that’s what friends are for. One weekend a year I can always count on seeing everyone, and no scalper can put a price on that.