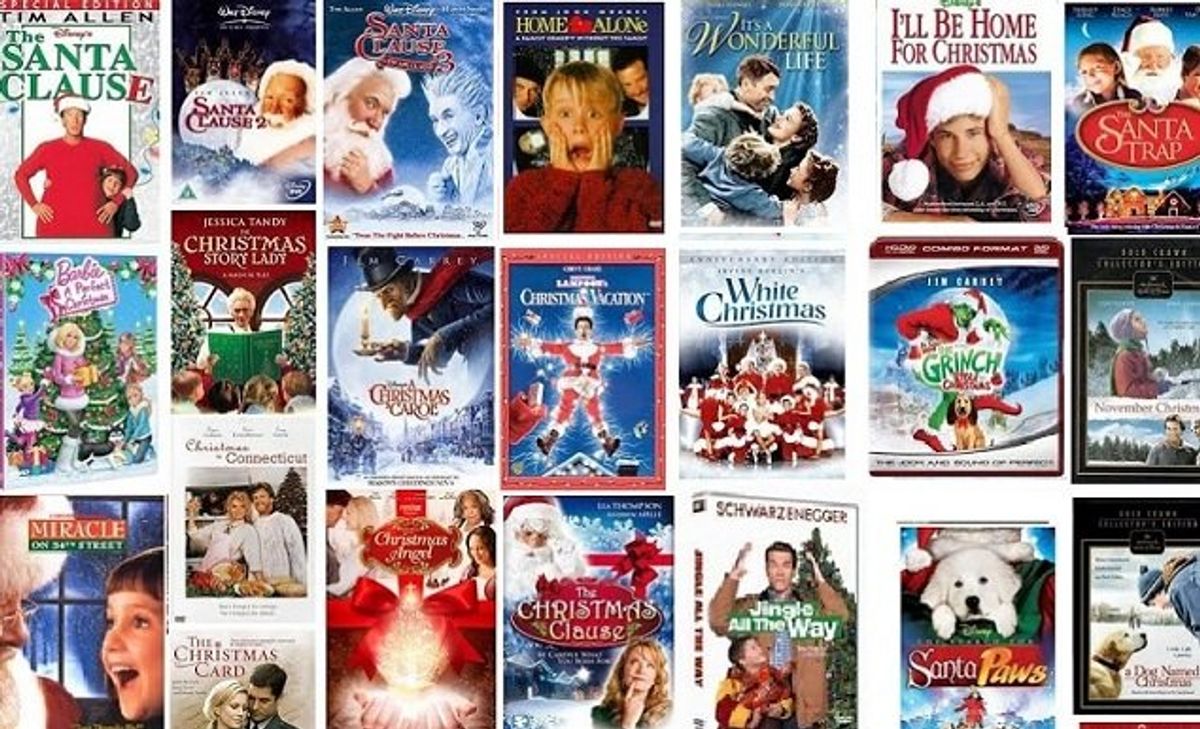 The holiday season is the most festive time of the year; as the sun goes down (at 4 p.m.) your neighbors’ lights go up, you consistently crave hot chocolate, and it quickly becomes impossible to start your car without catching a few bars of “Santa Baby.” But for those of us who smell latkes sizzling instead of chestnuts roasting, it’s also a season of injustice.

One of the most time-honored holiday traditions is snuggling up to watch a cheesy but cherished Christmas movie. And while I relate to "Scrooge" as much as the next person, I find myself wondering, where are the Hanukkah movies?

So in order to remedy this inequity, I have a few suggestions for Lifetime’s 2016 December lineup:

"How the Mensch Stole Christmas"

Despite his reputation as a standup guy, after years of being excluded from the holiday movie rotation, the mensch is finally back to steal some TV airtime for the Jews. As the religious underdog, the mensch has to channel his inner Judah Maccabee to rise up against the masses and ensure that Hanukkah gets the media representation it deserves.

Not unlike its Christmas counterpart, "The Menorah Express" bends space and time to allow Jewish children to hop on a train and travel back centuries to witness the ancient struggle between the Greeks and the Maccabees. This compelling tale also reveals a little known secret: the oil needed to keep the menorah burning for eight nights actually came from the train’s emergency fuel stash.

Set in the streets of New York City, this movie chronicles eight interrelated couples’ relationships throughout the eight days of Hanukkah. Despite their varied backgrounds, each of the main characters is somehow connected to the local bagel store, which is where most of the meshugas unravels.

This interfaith tale tells the story of a young Jewish girl who, much to her bubbe’s chagrin, wants to marry a non-Jewish guy. Despite her grandmother’s plotting (spiking his Manischewitz, making him schlep her to and from the kosher butcher, etc.), young love prevails and the happy couple marries on the last night of Hanukkah, which this year, happens to fall on Christmas Eve.

After skipping Hanukkah last year because of her divorce, Sarah Spiegel’s Jewish guilt finally leads her to book a flight home for the holidays. But after Sarah’s mom invites the hot new rabbi over to light the candles, Aunt Esther burns the latkes, and Uncle Saul forgets all the presents, this Spiegel family Hanukkah party spins out of control faster than a game of dreidel.

A modern interpretation of Charles Dickens’ beloved tale, "A Christmas Car(oil)" relates the story of Ezra Scrooge, a wealthy but cold-hearted oil magnate unwilling to spare a barrel of oil for a local family to light their Hanukkah menorah. But when the family’s youngest son, Small Seth, falls sick, his plea for help tugs on the ends of Scrooge’s tallis and warms both his heart and Seth’s family’s hearth.

"Under the Mistle(tov)" recounts a recent widower’s struggle to find love during the holiday season. After losing her husband over a year ago, Rachel Cohen finally lets her son set her up on a date with his Hebrew school teacher. But when her friend invites her to a Christmas party and she meets a handsome lawyer, Rachel is torn between the two great guys and can’t decide whom to bring home for Hanukkah.

Following in Kris Kringle’s merry footsteps, "Miracle" tells the story of Mark Moses, a man who convinces the public that he is Judah Maccabee. He works tirelessly to help minority groups find the chutzpah to rise up against their Antiochus-like antagonists. But despite Mark’s efforts to ensure that everyone has the freedom to practice what they believe, when the authorities get wind of his antics, Mark is taken to court and forced to defend his mental health and Maccabean authenticity.

A follow-up to "Elf," "Kvellf" stars Buddy the Elf’s cousin, Baruch, who is sick and tired of Hanukkah’s lack of representation during the holiday season. In an effort to represent his people, Baruch traverses the streets, trying to raise awareness and singing Hanukkah’s praises. Ultimately, he charms a department store CEO who agrees to stock more Hanukkah-themed gifts and offers him a hefty sum of gelt for working as an in-store Hanukkah consultant.

A notorious gossip, Sadie Bernstein always spends the weeks leading up to Hanukkah calling everyone she knows and chattering away about her friends’ families; she prattles on about Sheryl Metzger’s husband (who still hasn’t found job), Susan Shapiro’s latest lipo, and Terri Cohen’s three (still unmarried) daughters. But the night before Hanukkah begins, Sadie has a dream that reminds her of her Jewish history and what the holiday is supposed to be celebrating.

"The Nightmare Before Brisket"

Following his failed attempt to take over Christmastown, Jack Skellington is back to seek holiday vengeance on Hanukkah. He plots to kidnap the local rabbi and take control of the local Jewish community, but once Jack catches a whiff of a freshly cooked brisket cooling on the window, he’s drawn into the rabbi’s home and instead of staging a coup, spends the night learning how to make matzo ball soup.

Nicole Marie Nigro
Individual Creator
1637
c1.staticflickr.com
Where to start...... Let me start with the cliche that life throws us curveballs and what we do with it is what counts.

These Songs Took Over My Playlists in 2022