Dear World, I Am Zebra Strong

Dear World, I Am Zebra Strong

"Everyone has a story only they can tell" 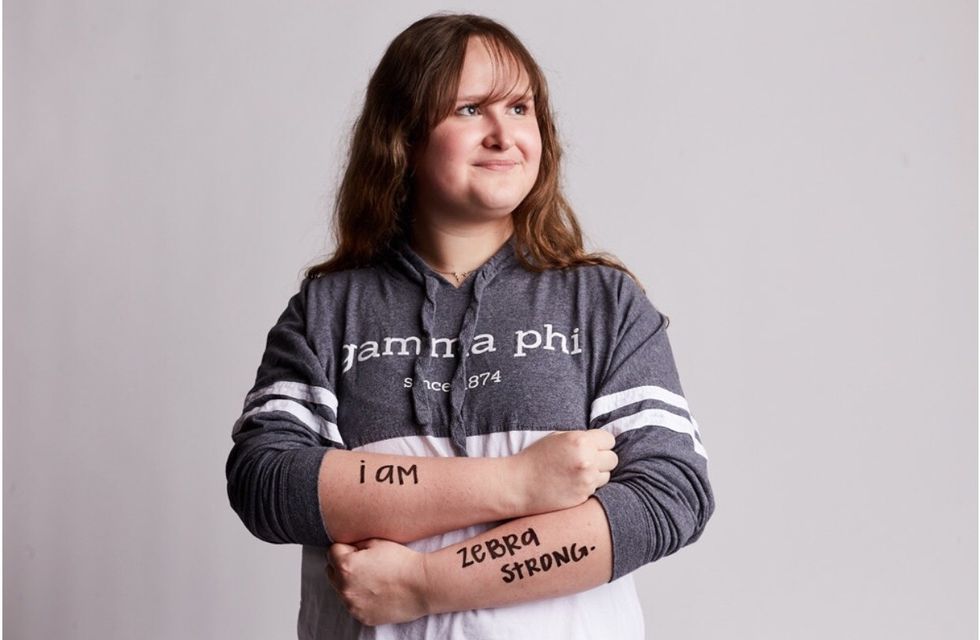 On Wednesday, February 26th, Missouri State University was visited by the award-winning portrait story-telling project. They encouraged students to take a moment out of their busy day to write a quote on their bodies and have their pictures taken by a professional photographer and share their stories with the world. So, here is my story.

The week before I started sixth grade at a new school I went to a pool party at my friend's house. My life changed forever as I reached for my beach towel that was in the back of my mom's mini-van after the party. My knee suddenly dislocated and an excruciatingly sharp pain shot through my body. This was not normal for me. All I could do was scream and cry as my parents called the ambulance and I was taken by ambulance to the ER to have my knee put back in place. When I woke up from sedation I thought it had all been a dream. I thought it was just a freak accident and that there was nothing else to worry about. Boy, was I wrong about that.

I missed a decent amount of school that year between MRI's, physical therapy, and appointments with my orthopedist. It was around this time that I started realizing something was wrong. I always thought that I was just clumsy and that was why I was getting hurt all the time. I started experiencing constant pain in my whole body. I began to isolate myself in a way because I was so tired all the time and never had enough energy to spend time with friends and family. In seventh grade, I underwent a surgical procedure as an attempt to correct my issues with my knee and continued to have more doctor appointments and even more physical therapy.

At the age of 13, I was diagnosed with hypermobile Ehlers Danlos Syndrome which is defined as "an inherited connective tissue disease that is caused by defects in a protein called collagen". Common Symptoms include joint hypermobility, loose and unstable joints that dislocate easily, joint pain and clicking joints, extreme fatigue, soft and stretchy skin that bruises very easily, etc.

EDS is an invisible illness which means that you can't tell that I have it just by looking at me. With that being said I have experienced a decent amount of discrimination in regards to my illness. During my senior year of high school, I had another major knee dislocation that left me in a knee immobilizer and on crutches for over a month and had a handicap parking placard for the time being. I was able to put weight on my leg and walk short distances with little difficulty. One time I was leaving school after a rehearsal for the school musical and found a "parking citation" on my car. It read "It seems you've had some trouble not parking like an idiot. Next time, please imagine how a responsible grownup would park. Then do that.". I had been "written up" for "misuse of a handicapped parking lot". What someone likely intended to be a "harmless joke" or "telling some idiot off" ended up really hurting me and making me felt unsafe. I had done absolutely nothing wrong. My placard was hung up and visible, my car was parked well within the lines, I even parked in the handicap spot furthest from the door in case an elderly person or someone who needed it more than me could have it.

Ehlers Danlos Syndrome impacts me every day. It is often a struggle to wake up and start my day. I wake up not feeling rested but often more tired than I was when I went to sleep. As I sit up in bed and stretch all my joints snap, crackle, pop, and return to their usual position if they migrated while I was asleep. My stiff joints slowly become laxer as I make my way to class. I may not look like it but EDS is almost always heavy on my mind and in my body. I'm not going to say that my illness never stops me. That would be a lie and an ableist one at that. I struggle a lot with my health and some days are better than others.

So, why am I zebra strong? In medical school, doctors are often taught the phrase "when you hear hoofbeats, think of horses, not zebras" which essentially means looking for a more common diagnosis rather than a rare one. However, sometimes those horses are actually zebras. EDS is considered a rare disease and EDS patients often have to wait a long time for a diagnosis because doctors will often REFUSE to diagnose a patient presenting with chronic pain and fatigue with a rare illness. With that being said, the zebra is the official "mascot" of the Ehlers Danlos community. No two zebras have the same stripes just as no two people with Ehlers Dalos Syndrome are the same. A group of zebras is commonly referred to as a "dazzle". EDS zebras are strong individually but together we dazzle.

I am zebra strong.