Chicken For The Seoul: My Appetite For Acceptance As A Korean Adoptee

Chicken For The Seoul: My Appetite For Acceptance As A Korean Adoptee 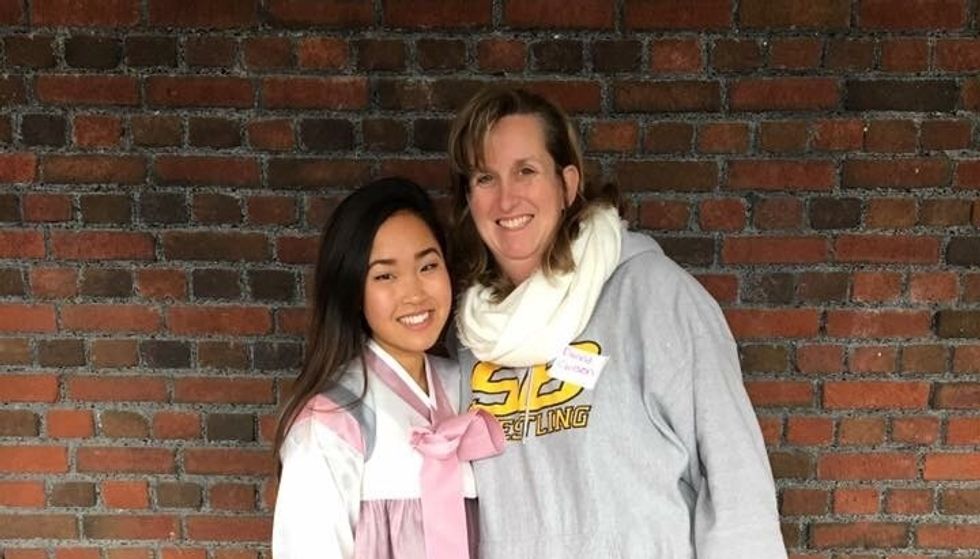 Fried chicken: perfect to cure my hunger! The ancient magic from playing the janggu, whiffing in the crisp air at the Jodo Islands, and connecting with the exuberance of Seoul's streets took my breath away. My travel book and Google images fantasies turned into realities. Korea flourished my wanderlust along with my ravenous appetite.

After performing Samulnori in the evening and later dancing to Korean pop music with my peers at night, my legs felt weak and my vision became foggy. A slow current of numbness drained my stomach, and sharp daggers of pain attacked my abdomen. If I didn't eat soon, my intestines would get swallowed by the void inside my body. Finally! The fried chicken arrived at 10 p.m., and the greasy goodness aroma lured me like a kid in a candy store. I then shoved my face into strange, lackluster chewy pieces of meat that KFC would never sell.

From day one, I always knew that I was adopted from South Korea at four months old but never over thought my chinky eyes and black hair compared to my Swedish-German blue-eyed and blonde family. But once six-year-olds started questioning why white people were in my family photos, I was perceived as this Asian-orphan-Annie and crucified for being apathetic towards a culture that I have no memory of. They were astonished to find out that I was not from the land of Mulan nor sushi, and there was nothing more I wanted than to bury my Chinese-Japanese ish heritage to culturally fit in with my friends and physically fit in with my family.

My perspective on my identity started to change during the summer of 2007 when I started attending a Korean culture camp for adoptees, where the norm is for campers to have tan skin and black hair and walk in with Caucasian parents. The immediate feeling of acceptance made camp my safe haven, and I felt eager to explore my roots without having any fear of being judged. Whiffing in sweet bulgogi, hearing the clash of janggu drums, and gazing at feathery fan dances for the first time swept me off of my feet. Curiosity bloomed into a growing passion for cultural discovery. In 2013, I jumped at the option to travel to Korea with other adoptees; two weeks and 1,576 pictures later, I returned to America with unforgettable memories, an entire suitcase filled with Korean goodies, and a fulfilled spirit. I was blessed with the opportunity to return again with the same group during the summer of 2018.

I visited my homeland but was never home until landing at JFK airport and driving back to New Jersey. Korea is the country where a selfless woman let go a piece of herself for two strangers sent from God to plant in their hearts and the peninsula where thousands of years of rich culture sprouted. I crave immersing myself in my heritage, yet I would never trade in my high school field hockey and track memories, countless copies of Vogue, and family for a life 6,800 miles away.

Though it sometimes frustrating being viewed as the Korean in America and the American in Korea, now I graciously share how adoption blessed me with my "real" family and a culture that I proudly wear on my sleeve. Having recently graduated high school, I understand how an open-mind satisfies my appetite for acceptance. I look forward to the unfamiliarity of meeting college students and embracing their unique backgrounds that plausibly may make me rethink what I believe to know about the filling of one's identity - just as how my hometown peers paused to understand the unique story behind my interracial adoption.

Despite the awe from being in the same country where I was born, eating bizarre fried chicken did not alleviate my hunger but instead made my s(e)oul realize that my American AND Korean identities are a packaged deal and that my first Odyssey entry would be incomplete without mentioning that I ate Garden State Kentucky Fried Chicken with rice once I returned to the United States.