Five Charity Events at The University of Michigan
Odyssey

Five Charity Events at The University of Michigan

Each Student Can Make a Difference 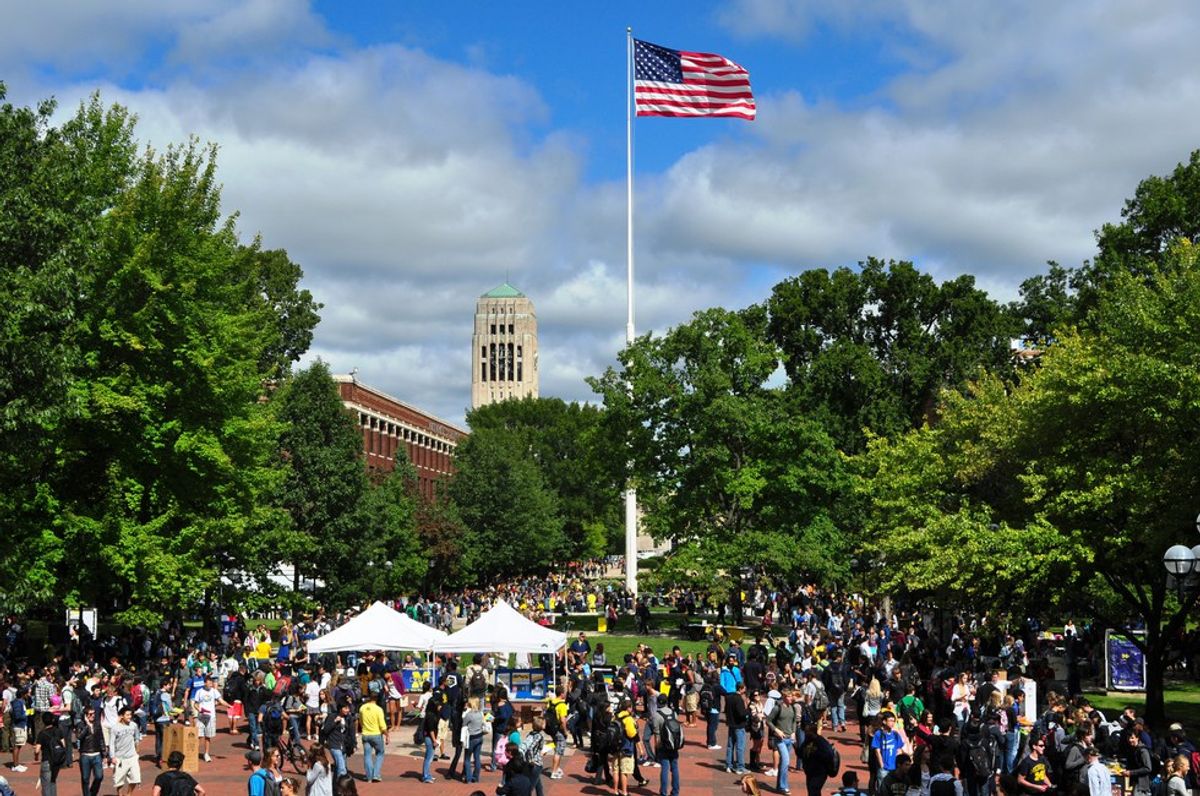 One college can make a huge difference. The University of Michigan, a large research university with tons of tools and resources, has multiple fundraisers a year to raise money for a wide range of charities. Whether it be small Greek Life philanthropy events, or larger school wide functions, there are several times a year where students come together and participate in charity events for important causes. The best part is, students get to raise money and awareness while having tons of fun! Here are five essential charity events that students at the University of Michigan participate in every year.

Scared of a little cold? We aren’t! Winterfest is one of the best and longest days of the school year. Students jump out of bed at 8 in the morning ready to dance outside all day, no matter what the weather may be. At 10 AM, various sororities and fraternities face each other for the annual Greek life broomball tournament hosted by the Alpha Sigma Phi and Pi Kappa Alpha fraternities. In order for teams to earn a spot in the bracket, they must raise money for the non-profit organization Autism Alliance of Michigan. It's competitive, tons of fun, and a great way for students to collectively raise money to both fund and raise awareness for people with Autism and their families.

Who doesn’t love to stand up and dance for 24 hours straight and raise money while doing it?! Dance marathon does just that through its annual VictorThon event, a fundraiser you simply can’t miss. Dance Marathon is a student-run non-profit organization that works to raise both money and awareness for pediatric rehab programs at C.S. Mott and Beaumont Children’s. This year, on March 25-26 the student body will unite in the indoor track and field building and dance for a cause. Almost 520K have been raised already, and there’s 6 weeks to go! Whether acting as a volunteer or a dancer, there are plenty of ways to get involved. Who needs sleep anyway.

What’s better than one fundraiser? A whole week of charity events! For over 30 years, the Greek community has teamed up and competed in various events that raise money for charity. Fraternities and sororities pair together and compete against each other in events such as tug-of-war, trivia, volleyball, or pie-eating contests. If you were born with an angelic voice or wicked dance skills, don’t forget to participate in the Sing and Variety Show! The events raise money for both national and local charities, and this year support the Josh E. Levine Foundation, Autism Alliance, Alternatives for Girls, Miracle League, and Safe House. Who wouldn’t want to raise money by shoving pie in your best friends face?!

Four words: Cancer must be stopped. Relay for Life is an iconic fundraiser to battle the vicious disease, and there’s nothing simply nothing like it. The event currently takes place in over 5,2000 communities and 20 countries across the world. Through a variety of fundraisers leading up to and smaller events that take place on the night of the relay, money is raised for the American Cancer Society as a way to take action and fight back against Cancer. On Saturday, April 8th, the entire Ann Arbor community will gather at Palmer Field and take turns walking around the track. As people continue to walk, they pass themed booths that continue to raise money by providing services such as food, games, and other activities. Whether you join a team, or are an individual participant, the University of Michigan takes Relay for Life very seriously and will not sleep until Cancer is a word of the past.

Greek Life is about more than having fun and finding friends. Each sorority and fraternity is affiliated with a cause that they fundraise for each year. Some raise money for local charities, and others support larger national organizations. This goal can be achieved through different philanthropic events, ones such as selling food late at night, coffee on Sunday afternoons, or apparel at each designated house. It’s one of the reasons Greek Life is so special and influential at universities worldwide. I am proud to belong to a sorority with a core value in philanthropy events, and believe it's a crucial reason to join the Greek community. Be active and get involved, because together we have the ability to make a huge difference.