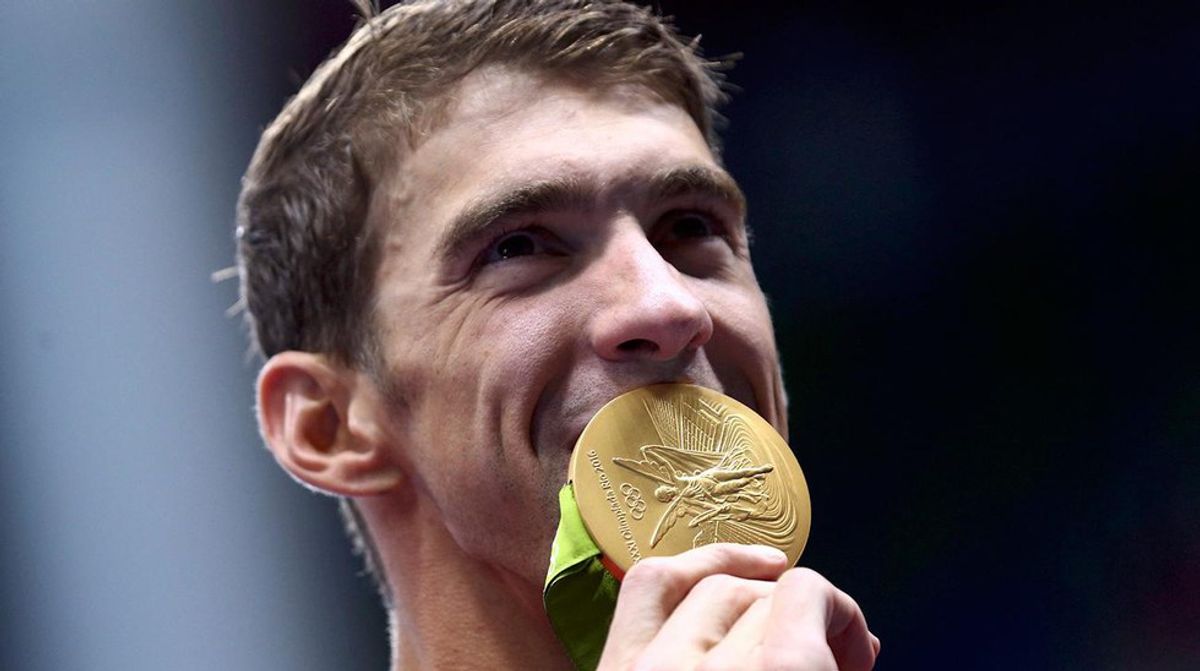 I have never been much of an athlete. My parents tried really hard to get me into a sport, actually several, but I never felt that competitive drive. Lucky for them, my little brother picks up the slack. I've always been perfectly content with sitting on the sideline and snapping pictures, or taking videos.

Being the Non-Athletic Regular Person that I am, I get extra excited when the Olympics happen because even my brother, who is a superstar in my eyes, can't compare to these athletes. Sorry, Robby. There's nothing more humbling than watching 16-year-old girls defy gravity, or watching a girl your own age swim a whole body's length ahead of her competition.

Of all the Olympians from our country, one has made us immensely proud since he stepped foot into the Sydney Olympics in 2000. At the age of fifteen, Michael Phelps became the youngest male to make a U.S. Olympic swim tea in 68 years. Because Phelps didn't win any medals, the media sort of overlooked him, but none of us were prepared for the storm he was about to bring.

Throughout the next three Olympics, Phelps won 18 gold medals and 22 medals overall making him the most decorated athlete in the history of the Olympics. Now, in 2016, he has 23 gold medals and 28 overall. That's incredible. And what's even more incredible than that? Phelps has remained humble even after all of these momentous achievements.

Everyone always jokes about how Olympians are superhuman, but I'm pretty sure Michael Phelps actually is. First of all, his wingspan is longer than his height. He stands at 6 feet and 5 inches. His wingspan is 6 feet and 8 inches long. Second of all, his feet are a size 14. Additionally, the ankles can bend so much that they're basically flippers. Third of all, his ability to recover from physical exertion is heightened. This just means that two races in one day are a small feat for him. So, yes, Michael Phelps is super human.

Unfortunately, it is time to say goodbye to our American superhero. After everything he has brought to this sport, this country, and these Olympics it will be exceptionally hard to let him go.

I remember when I first started paying attention to the Olympic coverage and Phelps was all over it. I watched all of his races and all of his interviews. I became so obsessed that I would swim in my grandma's four-foot pool for hours practicing whatever I watched him do the night before. For a little while I think I convinced myself I would be a good swimmer, but obviously, being the unathletic girl I am, I quickly realized I was wrong. Phelps made me want to strive to do more and if he made my lazy self go out and practice my swimming, he encouraged legions of other fans to do the same. Just look at this picture of you and this young girl, maybe one day she'll follow in your footsteps.

Oh, wait, she totally has.

Don't worry, Michael, Katie will take it from here. All jokes aside, you made this country proud and we are definitely going to miss watching you swim for us. You earned this break. You did well. Scratch that, you did great. Now, take off your medals and spend some time off.