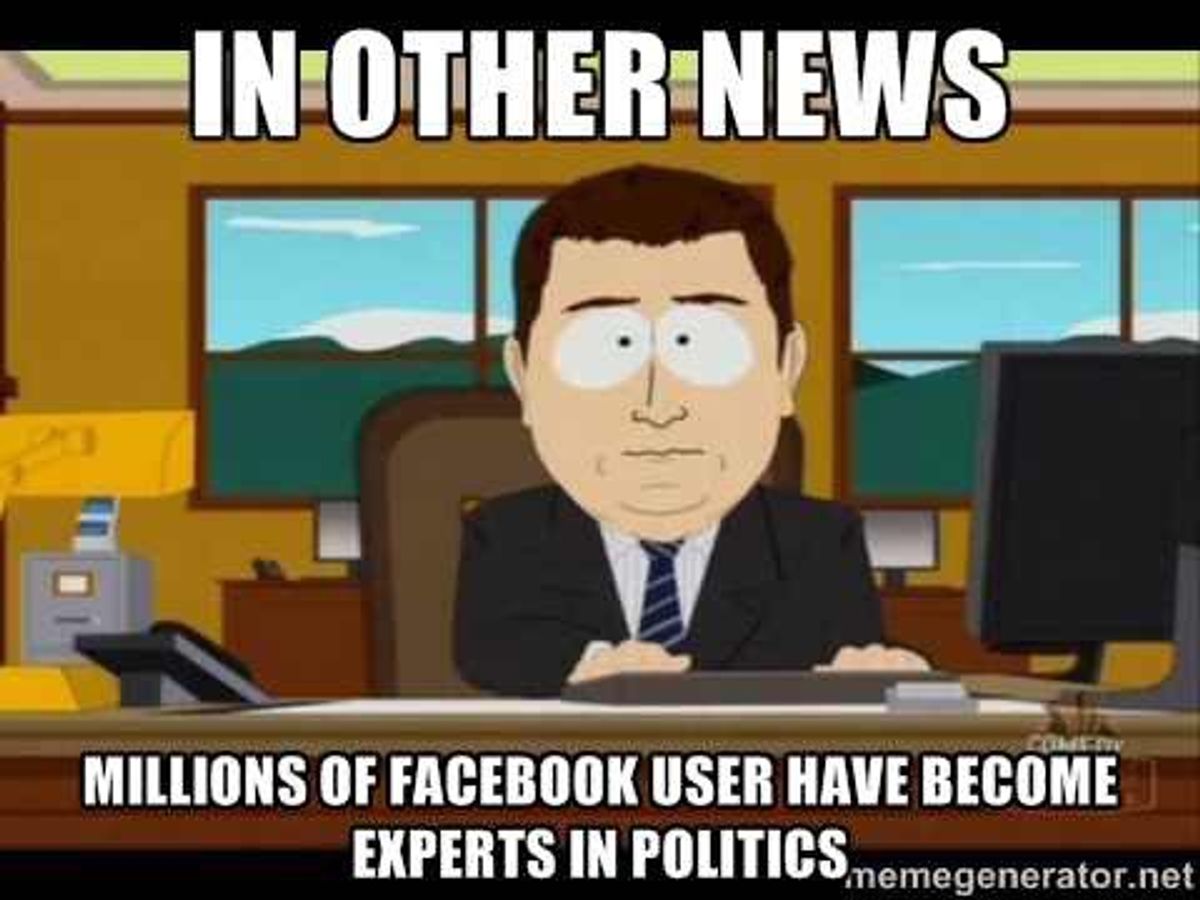 With the upcoming Presidential election, it has become impossible to get on social media without seeing a post about something political. Scrolls through Facebook, Twitter, and Instagram aren’t complete without a meme or quote from Donald, Hillary, or Bernie these days. Facebook especially has become an intense medium for people to share their political beliefs and support their preferred candidate. It’s important to express ourselves and our beliefs in whatever form we feel comfortable or think will have the greatest effect — but is Facebook the best way to do this? Let’s explore.

Facebook, like most forms of social media, allows the user to make posts and share thoughts immediately, and to a wide range of people. The average college student has hundreds to thousands of “friends” on Facebook, all of whom can see posts of all their other friends unless they have “unfollowed” their posts. The difference between Facebook and other forms of popular social media like Instagram or Twitter is that there is no word limit. People can post pictures, words, videos, voice recordings; “share” the words/pictures of others; or respond to posts by commenting. It combines all the sharing capabilities of many other social media sites, allowing for more freedom of expression and a greater stage for who can see posts and how people react to them.

All this being said, people take to Facebook in order to make a statement. Its primary purpose arguably is connecting with friends and updating others on your life through pictures and words. As a college student in today’s world, though, I see Facebook becoming more of a platform for social and political movements. Students are starting to realize that instead of going to old-school platforms (which are still relevant, but don’t spread content as quickly or virally) like newspapers, magazines, or even radio, they can get their words out to many more people, especially people they care about (“friends” on Facebook) and whose opinions they want to influence. Through Facebook, students can use their First Amendment rights to an extreme (but not full, due to censoring on the Internet, including places like Facebook) in order to put their political opinions where many people can see them in a casual, enjoyable fashion in between posts about the Kardashians or a cute spring break picture. How cool is that?

It can be annoying when someone on your Facebook feed keeps posting about politics that you may not agree with. Even if someone goes overboard posting about politics you do agree with, it can be too much or unenjoyable. But reading posts on Facebook has actually helped me understand not only politics better, but the opinions of many of my friends and acquaintances. Having completely different opinions regarding politics doesn’t render two people unable to be friends or have a conversation, on social media or in person. It challenges us to examine our own views and stay in touch with current events while being able to interact through comments, sharing, and new posts. It can be as casual or as serious as we want, which is a huge power. It especially is powerful for young people, who are often incredibly tech-savvy.

We should all use Facebook to our advantage to promote free speech and goodwill. This isn’t an excuse to go crazy on someone’s post, commenting hateful, irrelevant, or simply wrong information, but it is a reminder of how the current age of social media is rapidly influencing politics. It’s a pretty cool thing that a social media site has become an intense platform for politics among young people. No matter which candidate you support or if you buy into politics at all, be respectful, listen to your peers, and use social media to your advantage.
Report this Content
This article has not been reviewed by Odyssey HQ and solely reflects the ideas and opinions of the creator.