This Election IS Rigged...In Favor of Trump
Odyssey

This Election IS Rigged...In Favor of Trump

When Trump said the election would be rigged, he should know. Since he and his supporters are the ones trying to rig it. 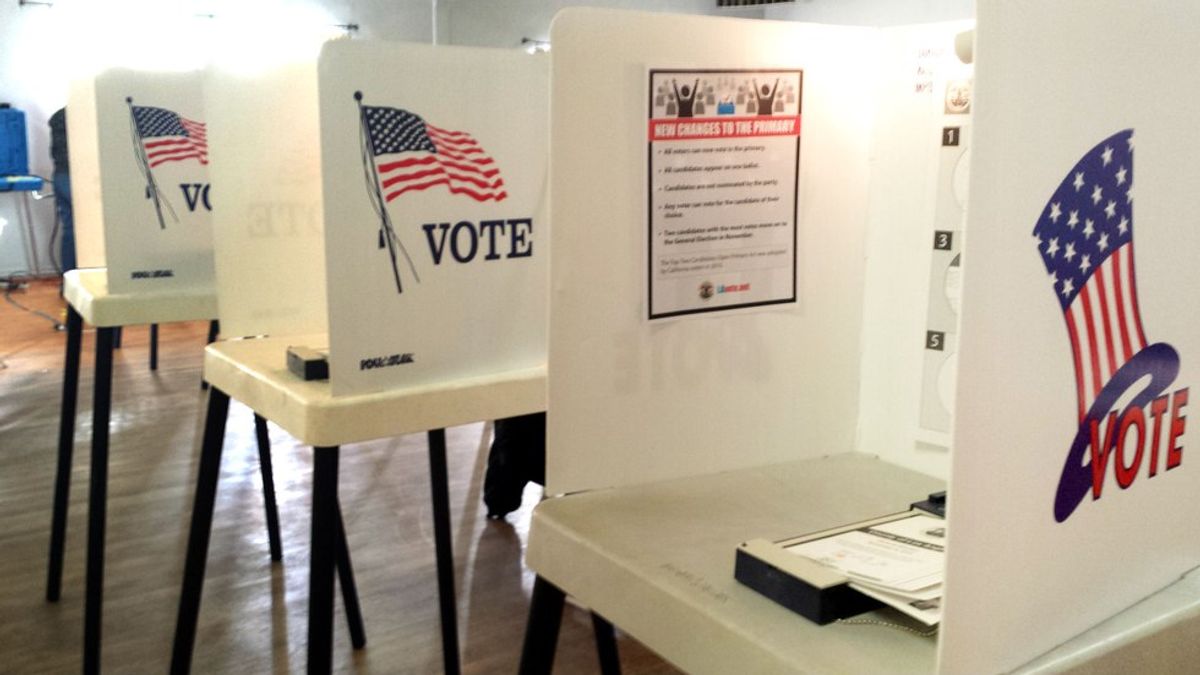 Trump and his supporters keep talking about how the election is rigged. Well...they're not exactly wrong...seeing as they are the ones rigging it.

Voter fraud in the way he meant is rarer than being struck by lightning. Between 2000 and 2014, when billions of votes had been cast, 31 were found to be fraudulent. Nowhere near enough to affect anything at all.

When there's been accusations of dead people voting, investigations showed that the person in question was very much alive, but I suppose that just doesn't make as sensational a headline. For example, people thought there were 5,412 incidences of voter fraud in Georgie in 2000. Investigation into that claim showed there was only one, and that occurred when a very much deceased "Alan J. Mandel" voted, but it turned out the clerk just accidentally ticked off his name rather than the very much alive US citizen "Alan J. Mandell". And most stories of "voter fraud" turn out to have perfectly legitimate explanations like this one rather than actual voter fraud occurring. In a New Hampshire investigation where 67 people were registered as voters twice, it was found that not a single one of them voted twice. They merely had reregistered after moving addresses without removing their previous address, and had no idea that they were registered twice. Almost every investigation ends this way. With a perfectly mundane explanation that shows no fraud has occurred.

Also, the whole "I chose ___ candidate, but it switched the vote to say ____"? Yeah, usually that's just the person accidentally clicked the wrong one or too close to the other one, and some of the machines are pretty old. Use your logic. If the machines actually were rigged, why would they be so nice as to tell you that they are rigged? Nope, it's purely accidental. And the poll workers will help you out in ensuring that your vote is properly counted.

So why do I claim that there is, in fact, a rigged election? Two reasons:

1. Illegal or not exactly legal activities done to sway voters.

2. Voter disenfranchisement, which is also illegal or not exactly legal.

We've all heard of Wikileaks by now. They're anti-Hillary propaganda which has gotten out of control. To begin with, it's just plain illegal, not to mention dangerous. Apparently they thought nothing of releasing citizen's home addresses, phone numbers, social security numbers, passport numbers, and credit card information. So...making identity theft - a crime - extremely easy. And when you look closely, they're just trying to make it seem like they have far more dirt on Hillary than they actually do. They know people will hear 'emails' and jump to the worst conclusion. I'm not sure exactly how releasing her chairman's recipe for a perfectly creamy risotto is dirt on Hillary, but okay.

Not to mention, I guess they ran out of dirt and assumed people would just focus in on the bad ones, so they released some emails that show how Clinton's been a pretty great person. So they kind of failed overall, but were actually right in assuming that people wouldn't bother actually looking at the emails and seeing how innocent they were.

Also let's take a moment to address the latest two leaks. No, Hillary hasn't said a word against Catholics. Those emails were between two of her staffers. Who were both Catholic. The emails read more like liberal Catholics pissed off at how there are so many fake Catholics. So...reads pretty much like any conversation at an university's Newmans center. And says nothing about Hillary, other than that she hires Catholic staffers. If you really want to know how she feels about Catholicism, she hired Tim Kaine as her running mate. How much more of a devout Catholic could she have picked?

And the "FBI re-opening her case"? Yeah that's pretty much completely bullshit. And brings me to my next point. Much of the FBI is literally against Hillary, so much so that some call it "Trumpland". They also are known for their lack of diversity and being an unfriendly space to any minorities, aka the groups that are overwhelmingly supporting Clinton right now. There's no surprise that this "announcement" came conveniently right before election time, just for them to quickly close it since they don't actually have anything on her. The FBI doesn't normally comment on open cases, and this one in particular really had nothing to do with Hillary herself. Nothing whatsoever. But it had the effect the FBI wanted, acting as an "October surprise" to swing the poll numbers to have a trend towards Trump. And you know who else, besides Hillary got hurt in the process? The very person who they were supposedly trying to protect by this investigation. They were investigating an online predator accusation against Anthony Weiner, but when they used it as a political tool for their own shady means instead of investigating properly, it pushed his underage victim into a spotlight she never wanted. She even told the FBI, "I now add you to the list of people who have victimized me."

The more I read about the email case, the more I want Hillary as President so she can work on making the FBI the non-partisan, unbiased organization we like to imagine it being.

Trump has literally been encouraging his supporters to rig the election in multiple ways.

So Trump said that in an attempt to combat the non-existent voter fraud, his supporters should essentially vote twice. Yeah, um...that's voter fraud. In fact, a Trump supporter has already been arrested trying to commit voter fraud in that very way.

b) Voter suppression by intimidation:

Trump has asked his supporters to, "go around and watch other polling places" because "I hear these horror shows, and we have to make sure that this election is not stolen from us and is not taken away from us." Because watchers can easily end up intimidating people and scaring them off from voting, most places have a very specific protocol as to who is allowed to be a poll watcher.

This one is nothing new. Every time the Republicans cite the non-existent "voter fraud" as a way to require ID laws that is difficult for low-income voters, they are trying to pass laws that would mean thousands, maybe millions of less voters every year that would normally go to the Democrats. There's no way that's a logical reaction to a "problem" that doesn't even occur .00001% of the time.

But Trump supporters are apparently not content with just that amount of voter disenfranchisement and have decided to take voter suppression into their own hands. In North Carolina, it's possible for anyone to suppress another person's voting rights, something which has happened in mass, with 65% of the disenfranchised voters being black even though they are a minority group there, clearly indicating someone is directly targeting them. Doing this also broke multiple federal laws, but if the government doesn't get on this illegal activity quick enough, this crime has the potential to actually affect the election.

Don't be fooled by Trump's blustering words. As usual, he's a buffing liar who tries to distract you from his and his supporter's crimes by accusing his opponents of the very thing he is doing.