The Good Effects Of Immigration On Texas' Economy
Odyssey

The Good Effects Of Immigration On Texas' Economy

Let Immigrants Into Texas; It's Better For Everyone 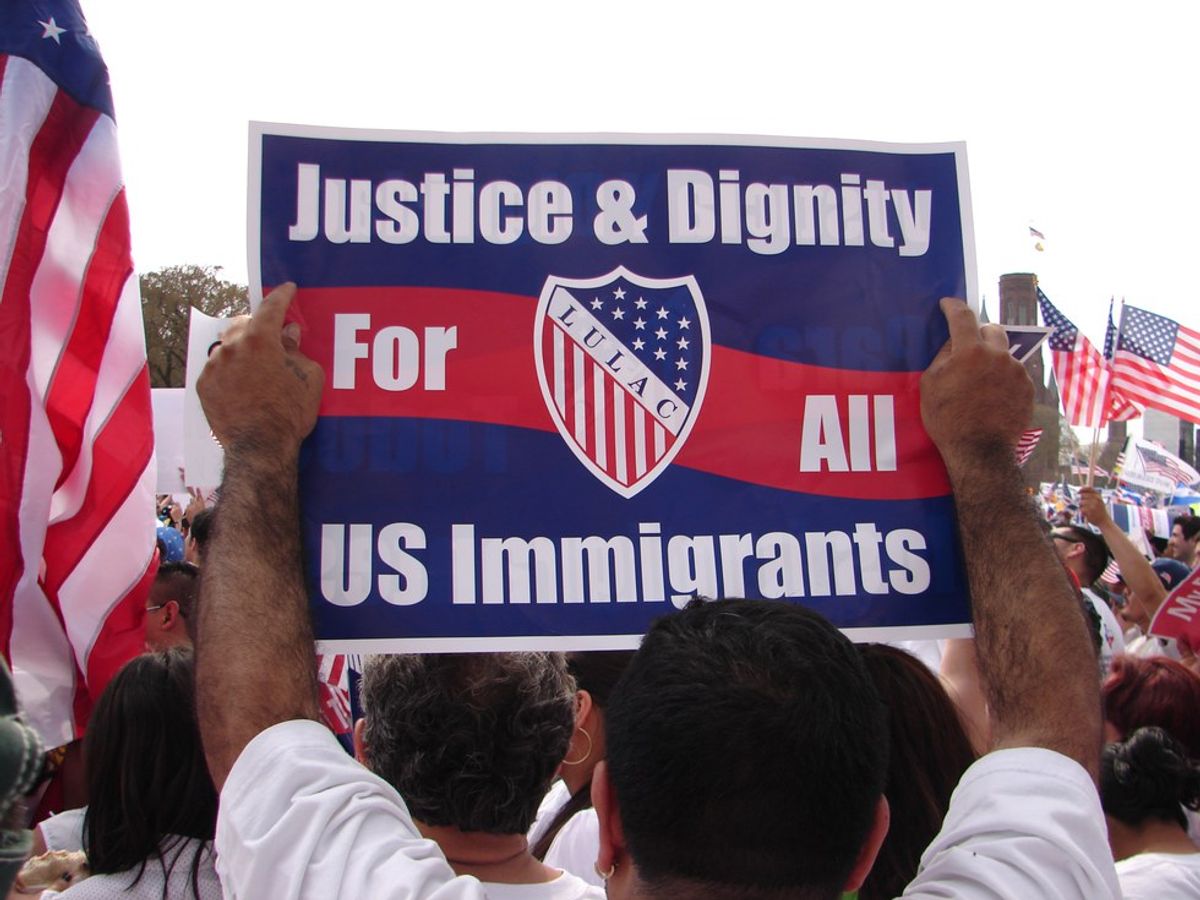 America has always been seen as the land of opportunity by the rest of the world, a place where they can come to start over and lead better lives. In the 19th century, many migrated to this land in search of better economic opportunities, and it is no different today.

Immigrants from all over the world come to America to find better jobs that would help them live in better conditions than they previously did. The discussion of immigration is more noticeable in the south, especially in Texas, because of how close Texas is to the southern border. Unfortunately, public opinion has been turned around, and immigrants are now seen as a “burden” on the economy.

Immigration is a major issue being addressed in politics today, and it is especially prominent with the Republican party candidates. Their negative views, coupled with the events of September 11 which still haunts many people today, have caused Americans to view immigration as a bad thing. They think immigrants take advantage of public services, such as health care, housing and jobs, and don’t contribute anything to the economy. Contrary to popular belief, the growth of the immigrant population in America, specifically in the city of Houston, has helped the economy go up, not fall apart.

There has been a steady flow of immigrants to the United Sates, especially in Texas. An article written by E. Tammy Kim, a writer for "Al Jazeera America," focuses on the growth and diversity of the immigrant population in Houston. Kim states that Houston has surpassed Los Angeles and New York City to become the most diverse metropolitan city in the country as a result of more affordable living and job opportunities.

According to a census taken in 2010, the city’s population had grown by more than 2.2 million people from 1990 to 2010. Although the flow of immigrants comes from many corners of the world, including but not limited to North Africa, Pakistan and Vietnam to name a few, the largest flow of immigrants comes from south of the border. Most foreign born residents here in Houston are from Mexico and Central America. Most of these residents face countless issues however, and have to live cautiously because they are considered illegal.

Cambridge Dictionaries Online define an illegal immigrant as someone who lives or works in another country when they do not have the right to (Cambridge). This became an issue in 1965 when amendments were made to the U.S. immigration laws that made it near impossible for Mexican immigrants to come to this country legally. In passing the Immigration and Naturalization Act of 1965 which favored those with skills that were deemed useful to the U.S., low-skilled and inexperienced workers from Mexico and Latin America had severely restricted chances.

The effect is still visible today throughout the country. Many states have reduced the number of immigrants they let in, and the numbers continue to dwindle. Texas, however, is more accepting of the newcomers, even with tightened border patrol. According to the article published by Dianna Solis in "The Dallas Morning News," Texas showed an increase of 200,000 in the number of immigrants that were allowed into the state. Even as they come to America with hopes of having a better life, the lack of legal authorization to stay in the country limits the opportunities they are given.

In spite of limited opportunities presented to them, immigrants continue to find a way to succeed in America. In addition to working mediocre jobs because of deficiency of experience, most immigrants also lack formal education. According to the research titled “The Effects of Immigration on Urban Communities” published in volume three of Cityscape, many of them come to Texas with only a high school education or less. Immigrants are more likely than U.S. natives to lack a high school education, and at the same time more likely to earn a college degree.

Thirty-two percent of immigrants who came into the country between 1985 and 1990 graduated from college, as compared to twenty-seven percent of U.S. natives in the same period. Unfortunately, not all immigrants get the opportunity to further their education, and they are restricted to merely working. Because of their illegal status and low skills, most immigrants are unable to get better paying jobs that require higher skill levels. They are limited to mostly jobs that don’t require higher education, and take up occupations such as housekeepers, waiters, tailors and taxi drivers.

A study featured in "Illegal Immigration from Mexico: Effects on the Texas Economy” in the Southwest Journal of Business and Economics shows that immigrants compete with low-skilled workers who are natives to Texas, which further limits their chances at getting jobs. They take on jobs that usually go to “disadvantaged subsets of the native population,” jobs which are critical to Texas’ economic growth, such as agriculture and the service industry. Their readiness to take on these jobs is what helps the economy grow.

The rise in the immigrant population and their willingness to work has boosted the Texas economy. In Suzy Khimm’s article, How much did illegal immigrants contribute to Texas’ economic boom, she states that twenty percent of Texas’ workforce is made up of immigrants, both legal and illegal. Houston-based immigration attorney and member of the Greater Houston Partnership Charles Foster declares that immigration is a big part of the economy in Texas. “It impacts Texas more than almost any other state.” (Khimm).

Because of immigrant labor, the state’s median hourly wage of $15.14 has been increasing at the sixth highest rate ever since the recession. Immigrants do take advantage of public services such as health care and public education while they reside in Texas. Even though illegal immigrants are unfit to receive most public services, they do receive emergency care that is payed for by the state when hospitals refuse to cover the costs. In spite of these greater demands put on the public sector and future costs that will come from the ever-increasing immigrant population, the state reaps more benefits from the undocumented workers. In Khimm’s article, she mentions a study released in 2006 by the Texas state comptroller which showed that illegal immigrants produced more in state revenues than they received in state services. “Undocumented immigrants produced $1.58 billion in state revenues, which exceeded the $1.16 billion in state services they received.” (Khimm).

The study also mentioned that without the immigrant population, the Texas workforce would decline by 6.3 percent, which would negatively affect other workers in Texas. Most immigrants are of working age and they have higher rates of labor-force involvement. The presence of immigrant workers raises income and employment for everyone, immigrant and native workers alike.

Popular opinion influenced by media makes immigrants out to be consumers who don't give anything back to the country, when in fact they give back much more than they take. The service immigrants offer far outweighs the service they receive from the state. What they lack in skills and education, they make up for in work etiquette. Immigrants take on jobs that go to uneducated Americans but help boost the Texas economy in many different aspects. Because of the steadily growing population of the hard-working, determined immigrants, Texas natives are able to reap the benefits of an increasingly progressing economy and workforce.