We Need To Talk About Donald Trump's Child Rape Case
Odyssey
CurrentlySwoonLifestyleHealth & WellnessStudent LifeContent InspirationEntertainmentPolitics and ActivismSportsAdulting
About usAdvertiseTermsPrivacyDMCAContact us
® 2023 ODYSSEY
Welcome back
Sign in to comment to your favorite stories, participate in your community and interact with your friends
or
LOG IN WITH FACEBOOK
No account? Create one
Start writing a post
Politics

We Need To Talk About Donald Trump's Child Rape Case

Except the media is purposely not talking about it. 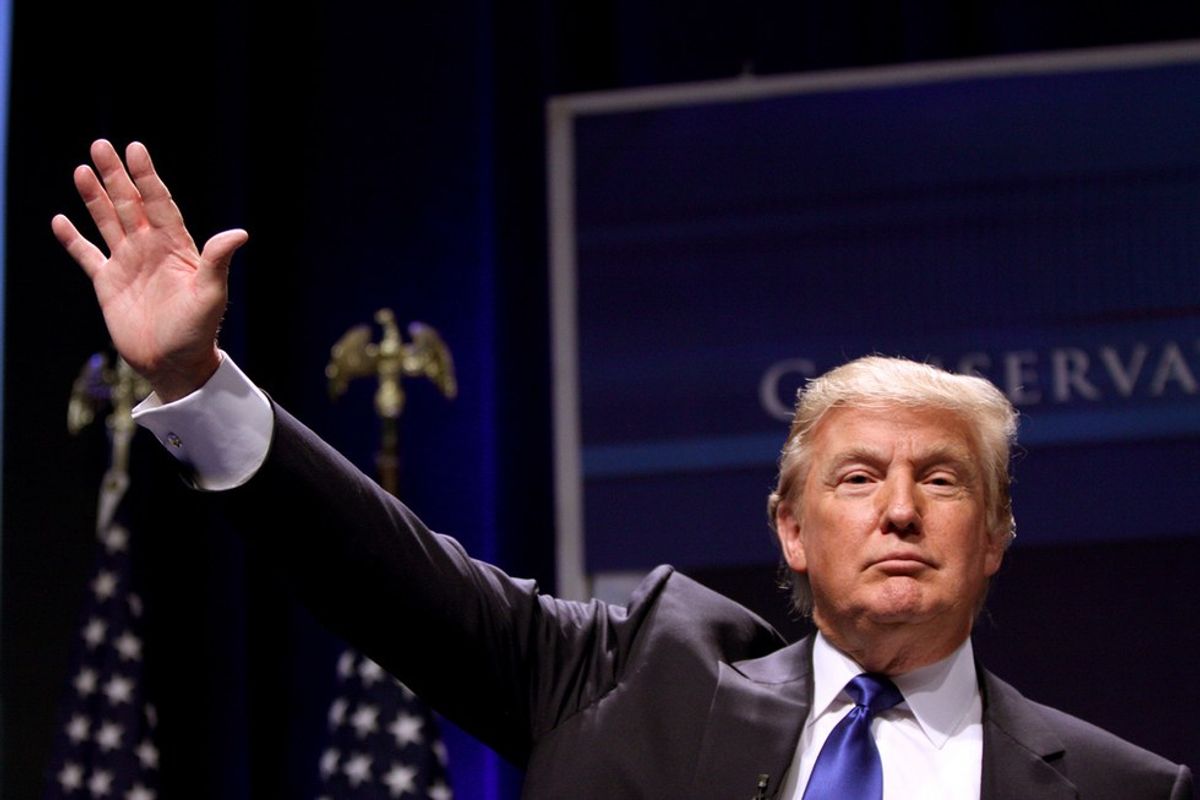 The media is disgusting. We all know this fact. It's a huge biased game, only covering "important" things during news segments... like what the Kardashian's are doing now or Britney Spears's new workout outfit. But now, during election season, the media has one job to do, and that is to report on anything and everything that could sway a voter's vote.

We all know that Donald Trump is sexist. The Telegraph even made a list of a lot of his sexist comments. Unfortunately, it doesn't cover all of them. The media is also covering up something huge: the child rape lawsuit filed against him. Snopes reports that the original lawsuit was filed back in April, but was thrown out due to filing errors. A second lawsuit was filed on June 20th; a copy of the lawsuit and affidavits can be found here.

Full disclosure: I know nothing about lawsuits or how court works. Nor do I one-hundred percent understand what is being said within the lawsuit filing, because I'm not in law school, won't pretend to be in law school, and never intend on going to law school. Luckily, sources like Huffington Post and MSN have helped me, a standard civilian, understand.

With promises of money and a modeling career, she attended a series of parties. Both Donald J. Trump and Jeffrey E. Epstein were in attendance at these parties.

2. There were four incidences where Trump initiated sexual contact with the Plaintiff.

On the fourth incident, Trump tied her to a bed and forcibly raped her, in a "savage sexual attack," while she "loudly pleaded" with him to stop and Trump "violently struck her in the face."

3. Epstein had also had sexual contact with the Plaintiff.

He "forced himself upon [her] and proceeded to rape [her] anally and vaginally despite [her] loud pleas to stop. Epstein then attempted to strike [her] about the head with his closed fists while he angrily screamed at [her] that he, Epstein, should have been the one who took [her] virginity, not Trump."

4. Both Trump and Epstein threatened the Plaintiff's family, saying they would be "physically harmed if not killed" if she said anything to anyone about these incidences.

These threats also extended to the Plaintiff herself.

5. These acts were witnessed by Tiffany Doe (another pseudonym), who was an employee of Epstein, on all occasions.

Her job was a "party planner in which [her] duties were to get attractive adolescent women to attend ... parties." She invited Jane Doe to these parties, which were hosted by Epstein at 9 E. 71st St. in Manhattan.

6. Within the state of New York, Jane Doe was not able to legally consent to any sexual acts, due to being a minor.

8. On April 28, Trump said, "The allegations are not only categorically false, but disgusting at the highest level and clearly framed to solicit media attention or, perhaps, are simply politically motivated. There is absolutely no merit to these allegations. Period."

It's also important to note that Epstein is often referred to as a "billionaire pedophile" and is a registered Level 3 sex offender. This, along with every misogynistic comment out of Trump's mouth (see the above list from The Telegraph), makes it hard to believe that the allegations aren't true.

As a person who would like to date his daughter — "If Ivanka weren't my daughter, perhaps I'd be dating her" — none of this surprises me. But believe what you wish. America's Justice System isn't the best thing about this country — #BlackLivesMatter, anyone? — so it's hard to say what will happen with this case. If Hillary's FBI trial has taught us anything, it's that politicians can get away with anything. Even though Trump isn't really a politician, no matter how hard he believes he is, he could potentially still be the GOP Presidential Nominee, despite Jane Doe's claims.

Imagine that. A Trump v. Hillary ballot. More like Rapist v. Criminal ballot. I have to pick the lesser of two evils? No thanks.

Nicole Marie Nigro
Individual Creator
8437
c1.staticflickr.com
Where to start...... Let me start with the cliche that life throws us curveballs and what we do with it is what counts.