Does The U.S. Inadvertently Create More Terrorists?
Odyssey
CurrentlySwoonLifestyleHealth & WellnessStudent LifeContent InspirationEntertainmentPolitics and ActivismSportsAdulting
About usAdvertiseTermsPrivacyDMCAContact us
® 2023 ODYSSEY
Welcome back
Sign in to comment to your favorite stories, participate in your community and interact with your friends
or
LOG IN WITH FACEBOOK
No account? Create one
Start writing a post
Politics

As civilian deaths due to counter-terrorism operations rise, it is no wonder that people join terrorist groups for revenge against the U.S. 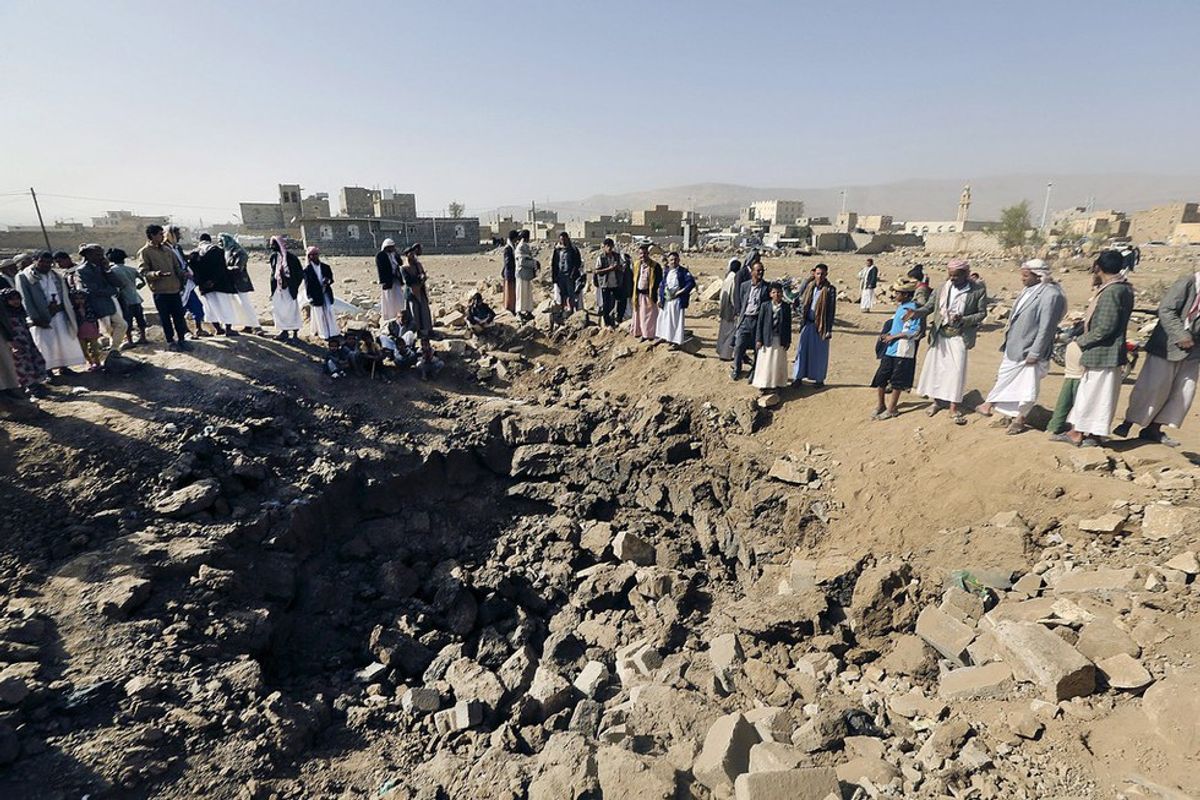 On July 19, the US bombing raids in the Manbij area of Northern Syria killed at least 73 identified civilians, predominantly women and children. According to the UK-based Syrian Observatory for Human Rights, these attacks were “carried out in error” and that the dead included eight victims and 11 children, with dozens more injured. With the majority of victims being women and children, activists have called this “the deadliest coalition attack on non-combatants since the start of the bombing campaign against the Islamic State.” The bombing was part of a two month initiative to seize Manbij, a strategic center key to the struggle against ISIS. However, even before the latest airstrike, activists warned that there would be high civilian casualties.

“The death toll is 117. We could document [the identity of] 73 civilians including 35 children and 20 women. The rest of the dead bodies are charred, or have been reduced to shreds,” said Adnan al-Housen, an activist from Manbij.

This is not the first instance in which a US bombing raid or drone strike has led to the deaths of many civilians. In 2002, the US first launched unmanned aerial vehicles (UAVs) over Yemen in the fight against Al-Qaeda, though most of the aircraft strikes have taken place since 2011. According to the Bureau of Investigative Journalism's Drone War program, 101 civilians have been killed by drone strikes in Yemen, including 26 to 61 others killed by "possible extra drone strikes." Moreover, in other covert missions since 2002, between 156 and 365 civilians have also been killed. By September of 2015, the UN's Office of the High Commissioner for Human Rights (OHCHR) estimated that as many as 40 civilians had been killed that year by drone strikes. Chris Woods, an investigative journalist with the airstrike-tracking website Airwars, said in an interview with VICE News that the US was the only country operating drones in Yemen. Although the US has other drone-based counter-terrorism operations in countries like Pakistan, the attacks on Yemen seem to be carried out with fewer safety measures.

"The drone ops we tend to see in places like Yemen, I am absolutely sure they are using a different rule book because they are counter-terrorism targets and they're deemed to be higher value targets. That places civilians at greater risk on the ground. We see more civilians killed when it's counter-terrorism ops, because the targets are deemed as a threat to the US homeland and therefore there's a greater tolerance of collateral damage,” said Woods.

The drones were implemented as a way to reduce civilian deaths because they are supposed to be carefully monitored and provide the most accurate information in terms of confirming the locations of actual terrorists. Unfortunately, as seen with Yemen, the regulations and safeguards are not always a top priority and lead to innocents being murdered. About eight to 17 percent of civilians are killed by drone strikes; since the US began these strikes abroad after the September 11, 2001 attack, it is estimated that between 174 and 1,047 civilians have been killed in Pakistan, Yemen, and Somalia. Moreover, even though drones are supposed to prevent harm to civilians, they instill more fear because of their constant, unseen presence. The drones create almost a constant terror even for civilians because they are an invisible threat. Clive Stafford Smith, the director of a human rights organization called Reprieve, discussed how the drones disrupt the ways of life for many people, making them afraid to go to weddings, funerals, and even school. In addition, Mullah Zabara, a Yemeni tribal sheik, called the drones a form of terrorism: “The drones are flying day and night, frightening women and children, disturbing sleeping people. This is terrorism."

By creating this constant state of fear and distress via drone and airstrikes, the US has inadvertently created more terrorists. When the US drone strikes resumed in 2009 from a seven year hiatus, the Al-Qaeda in the Arabian Peninsula core members grew from 300 to 700 in 2012. Living in fear and/or having loved ones killed in these attacks has caused people to see the US as an enemy, which motivates them to join terrorist organizations. In June, even CIA director John Brennan stated that years into the fight against ISIS, the terrorist group has only grown stronger, and has more members than Al-Qaeda did even at its height. His comments only confirm the warnings activists have given about these counter-terrorism approaches only helping organizations like ISIS gain more members. When President Obama authorized new US airstrikes in Iraq in 2014, Phyllis Bennis, a fellow for the Institute for Policy Studies, warned that, “…we cannot bomb Islamist extremists into submission or disappearance. Every bomb recruits more supporters."

In 2015, four former US air force service members, who had more than 20 years of experience in operating military drones, penned an open letter to President Obama warning that the program of targeted killings by unmanned aircrafts were becoming a significant driving force for ISIS and other terrorist organizations, especially in recruitment. In the letter, they pleaded with the Obama administration to rethink these military tactics, especially since these airstrikes kill many innocent civilians.

“[Drone strikes have] fueled the feelings of hatred that ignited terrorism and groups like ISIS, while also serving as a fundamental recruitment tool similar to Guantanamo Bay…[civilian deaths via airstrikes are] devastating driving forces of terrorism and destabilization around the world,” the servicemen wrote.

Nicole Marie Nigro
Individual Creator
8593
c1.staticflickr.com
Where to start...... Let me start with the cliche that life throws us curveballs and what we do with it is what counts.