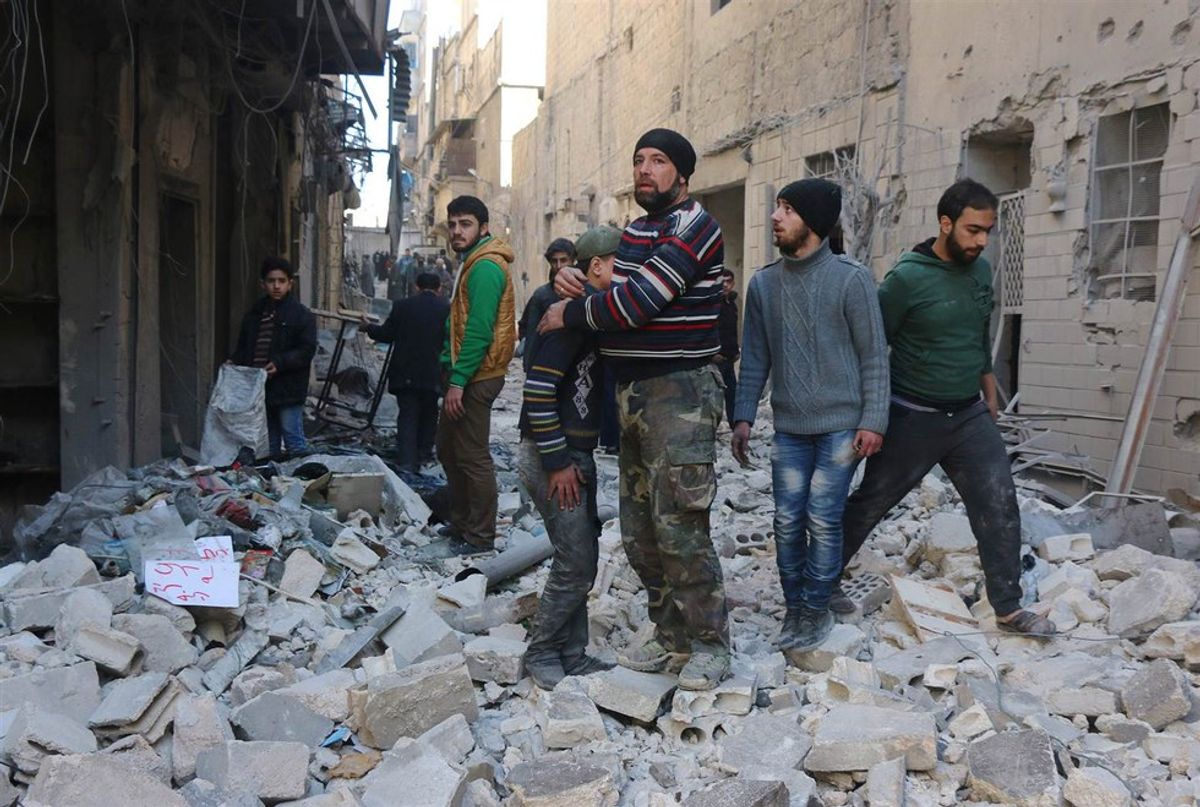 The increasingly violent war in Syria has displaced hundreds of thousands of Syrians. Since the war first broke out in 2011, over 400,000 Syrians have been killed, according to the United Nations.


For those unfamiliar with the ongoing humanitarian crisis, here is a brief rundown:

The struggle is occurring mainly between four factions in the country: Kurdish forces, ISIS, the Assad regime (under president Bashar al-Assad), and other smaller rebel groups.

The war was birthed from civil unrest following the 2011 Arab Spring, a wave of political protests that spread through the Middle East in countries such as Tunisia, Libya, Egypt, and Syria.

The first string of Syrian protests resulted from public outrage over the assault and arrest of a Damascene man by a police officer. The Ba’athist government of Syria, which has ruled since 1963, responded to the protesters with severe security crackdowns and invasive military operations, killing hundreds of protesters over the course of several months.

Oppositional factions gained power in Syria as a result of the brutal attacks by the Syrian government upon its own people. Very quickly the conflict has escalated into a full blown proxy war, influenced and supported by foreign actors, including the United States, Russia, Iran and Saudi Arabia.

Today, the death toll has risen to over 470,000. Additionally, the war has created over 4.8 million refugees as well as left 7.6 million people internally displaced.

The rising influx of refugees into Syria’s neighboring countries, parts of Europe, and even the U.S. has caused a massive surge of inaccurate information, or “refugee myths” to circulate throughout public discourse.

With the current political atmosphere of the U.S. presidential elections these claims have become more prolific than ever, but are still nowhere nearer to being true.

It is essential to take a critical look at many of the arguments and claims brought forth by those in opposition to the government’s plan to increase the number of Syrian refugees accepted into the country.

I have compiled a list of the most common claims made about Syrian refugees below:

MYTH: 70% of Syrian refugees brought in to the United States are single, young men.

FACT: Single men not attached to families make up only 2% of all Syrian refugee admissions to the U.S. according to the U.S. Department of State.

MYTH: Syrian refugees are not being screened properly.

FACT: Refugees of ALL nationalities undergo an extensive security screening process in order to be considered for admission to the United States. This screening process is the highest level of security checks subjected to any category of traveler to our country and includes bio-metric and biographic checks, as well as an extensive interview process conducted by trained Department of Homeland Security officers. Multiple federal intelligence, security, and law enforcement agencies take part in the screening process, such as the Federal Bureau of Investigation, the Department of Homeland Security, and the National Counter-terrorism Center. In addition, due to the nature of the Syrian conflict, Syrian refugees undergo an enhanced level of review, according to the U.S. Department of State. None of the Syrian refugees admitted to the country have been arrested or removed on terrorism charges.

MYTH: Refugees are a burden to the taxpayer.

FACT: Refugees are expected to pay the same taxes as any U.S. citizen, including income, property, and sales taxes. A recent study conducted in Cleveland, Ohio found that refugees typically find employment within their first five months in the country, making them an asset to the American economic system--not a burden.

FACT: The refugees entering the United States must undergo a rigorous screening process before being allowed asylum. Unlike those crossing European borders, Syrian refugees cannot cross United States borders illegally, simply due to geographic distance and vast oceans preventing them from doing so. Refugees are overwhelmingly the victims of terrorism.

MYTH: Over 250,000 Syrian refugees are expected to arrive in the United States.

FACT: Although the Republican nominee has repeatedly claimed that hundreds of thousands of un-vetted Syrian refugees will flood into our nation, this is entirely false. Since the Syrian conflict began in 2011, the United States has admitted little over 5,000 processed and screened Syrian refugees. The goal of the administration is to increase the numbers of accepted Syrian refugees to about 10,000-- not a quarter of a million.

MYTH: We are undergoing a migrant crisis, not a refugee crisis.

FACT: The terms migrant and refugee are not inter-changeable. A migrant is a person who emigrates from their home country for a variety push and pull factors, such as to reunite with family, flee conflict, or to seek better economic opportunities. A migrant is not always a refugee. A refugee is someone who has fled their home country and is unable to return due to terrorism or persecution based on religion, race, nationality, and political or social alliances. Refugees are only allowed to resettle in the United States after Department of Homeland Security agents determine the applicant meets the United States' legal definition of a refugee.

These are just a small number of the many myths that have been perpetuated by media about incoming refugees for the simple fact that hysteria and fear-mongering is great for ratings.

It is interesting to draw a parallel from the current American attitude toward Syrian refugees to our nation's reluctance to accept Jewish refugees fleeing Nazi Germany just before World War II. As a country who has prided itself on being birthed from immigrants, we seem to have forgotten our origins.

"Give me your tired, your poor, your huddled masses yearning to breathe free, the wretched refuse of your teeming shore. Send these, the homeless, the tempest-tossed to me, I lift my lamp beside the golden door!" - Inscription at the base of the Statue of Liberty.