Where my existentialist moms at? 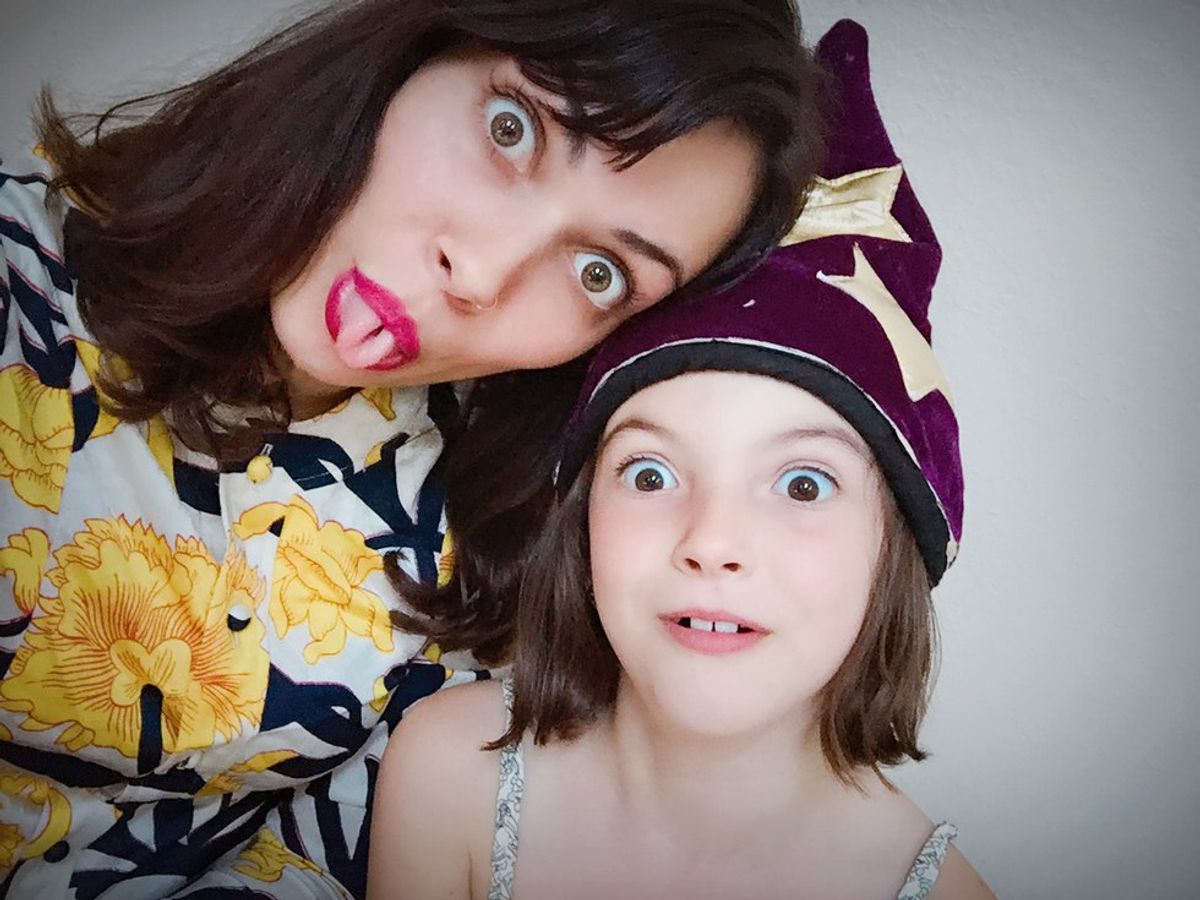 Another year gone by. Snippets of time are filed away, but most is lost in the buzzing of hurried days. Her freckles bring me back to center. She skips up with her cello strapped to her back, her lunchbox in one hand and a Radical Mycology zine in the other. She reaches out for me and nuzzles in. She tells me about a play she's writing with friends about aliens invading Earth for pizza. I distractedly listen to what she's saying because it's time to fight traffic again, time to merge into the rapids of stop-and-go rubber and glass. Green, yellow, red. Hours of life spent commuting every day, precious moments of a lifetime spent tending to the cogs of the state.

I’m exhausted. This is not how human life is meant to be. Grinding away, forever climbing the downward-bound escalator of capitalism. Most days I operate from a place of cynicism smeared with hopeful awareness. I’m admittedly depressed and filled to the brim with anxiety. You can see it in the way I forget half-empty teacups on the windowsill for days, or leave clean laundry in unfolded heaps on the floor. I lose my keys regularly and always manage to spill coffee on a new dress before client meetings.

I look in the rearview mirror and my daughter bites into an apple. A million thoughts race through my head. Did she wash it well enough? Where was it grown? Whose hands touched it? What’s their story? Are they paid a living wage? Of course not. Can they even afford to feed their families the same apples they spend their days picking? It was stickered organic, but is it really? Will she get sick from food like that child who died from E. coli whose forever-grieving mother now travels from city to city speaking out against crooked FDA officials? Stop. Take a breath. Look at her freckles. She’s still smiling.

Never have I ever experienced anxiety and hypochondria like I do now as a mother. They say if you’re depressed, you’re living in the past…and if you’re anxious, you’re living in the future. But what if you’re both? What if the present moment is always escaping you? What if you’re so hung up on the moments you’ve missed (thanks to the oppression of wage labor and class society) that when you actually have real moments with your kids, they’re spent worrying about everything else? What if you’re so worried about the hustle to provide that you forget how fragile and fleeting it all really is? What I’ve known for a long while now is that I am not broken, the system in which I live is broken; a system that does not offer affordable housing or affordable food, but always dangles a transient carrot just out of reach so you continue to slave away, day after day - a system that denies you basic survival necessities when you lack the dollars to exchange for it - so you're left hungry and houseless. I could go on, but I'm tired. The kind of tired you feel in your bones.

My daughter will someday realize the contrast between her childhood and those of her peers at school, and I pray every day she won’t grow to resent me for it. While many of her peers come from two-parent households, she snuggles up to her single mama most nights. While most of the others share family meals at dining room tables tonight, she happily eats a tortilla with rice, lentils and a pickle while her mama sits writing this article. She’s optimistic and silly and full of life. She’s not a morning person like me. It’s not easy getting her out of bed on time most days. She’s simultaneously complex and simple. She plays the piano like a brilliant wizard and writes poems about her love of snails. She’s weird. She’s witty and goofy and fun. She’s bright beyond measure, beyond what any bullshit standardized test can ever attempt to calculate. She’s intuitive and empathetic. She’s kind and gentle and understanding. She feels deeply. She thinks critically. She finds the world around her fascinating and absurd and wonderful. She buries her nose in books and has lived most of her life without a television. She likes jazz and classical music. She’s a creator. She loves to swim and roller skate. She tolerates my messes, both material and psychological. She tolerates my sarcasm. She tolerates my sentimentality. She tolerates my incessant need to analyze everything. She tolerates my lateness. She tolerates me. She teases me for having a brown thumb…my love of plants but my inability to keep them alive (she does that part for me). She doesn’t like sugar because I haven’t raised her on it. A friend offered her a snickerdoodle cookie the other day and she nibbled it twice before saying, “it’s too sweet, mama, you can have it.” She has zero cavities and a beautiful giggle. She loves sushi. She doesn’t love pho. She insists on wearing her hat backwards. She wanted her hair long and untamed until one day last week she said, “Mom, let’s cut it all off now.” And we did.

Most days pass too quickly to remember what the time between birth and 9 held. I can honestly say I don't remember what it felt like to hold a nursing baby drunk on mama's milk. I can honestly say I don't remember what it was like to have a tantrum'ing 3-year-old in the grocery store unable to regulate emotion or communicate thoroughly. I can honestly say I've yet to experience the fluctuating hormonal state of a teenaged daughter. I can also honestly say I'm already mourning the passing of those moments even if they're years from now. I mourn the loss of moments we’ll never get back because they’ve already been lived, and oftentimes not fully realized. So much potential lives beneath the surface of where we choose to live - or where we are forced to live, rather. We have an illusion of freedom, an illusion of choice, an illusion of immortality. We are bred to produce. We are not the operators behind this great machine like we’re led to believe. If I had a choice, I would be living off the grid cherishing every moment with my girl, teaching her everything I know, and learning right alongside her. Because what do they have after we are gone? I want to protect her and guide her for as long as she’ll allow. I want to show her that her value is not in what she produces for a sick, mechanical society, but what she offers to other living, breathing biological entities.

The other day I was standing on the corner of a busy intersection waiting to cross the street. Cars sped by in a fury, smog and noise billowing toward a towering Denver skyline. In that moment I felt smaller than small. I felt my fragility and mortality very deeply and suddenly and I feared for all the babies in the world who are hurled into this speedy fight-or-die reality. It’s not the first time I’ve felt that, nor the last. We are all racing toward an elusive end goal. Imagine being at the end of your life wondering where all your precious time went and realizing most of it went to organizing receipts for tax season or labeling packages for a company you’re morally opposed to or Tweeting about what that one upsetting thing that exhausted cashier said to you at the deli earlier. We allow ourselves to be reduced to mediocrity and hover there on our couches like passive, mindless tools. TGIF though ‘cause your craft beer and whatever-the-fuck show you like is waiting for you I guess.

Stay grounded, people. Stay centered. Remember your purpose, remember your heart. So much of our identity is caught up in the grind of mundane tasks. It's easy to lose sight.

Excuse me, I have a million anxious thoughts to attend to and a flavorless lentil and rice-filled tortilla to eat. With a side of pickle and panic. Caio.

Kassie Hsu
Baylor University
4391
Panda Whale
Here are 100 things I'd rather to than study. I know the semester just started, but
Featured