The Problem of Overcrowding On Everest

Someone Should Probably Do Something About All The Overcrowding On Mt. Everest

Or, maybe just don't try to climb it in the first place. 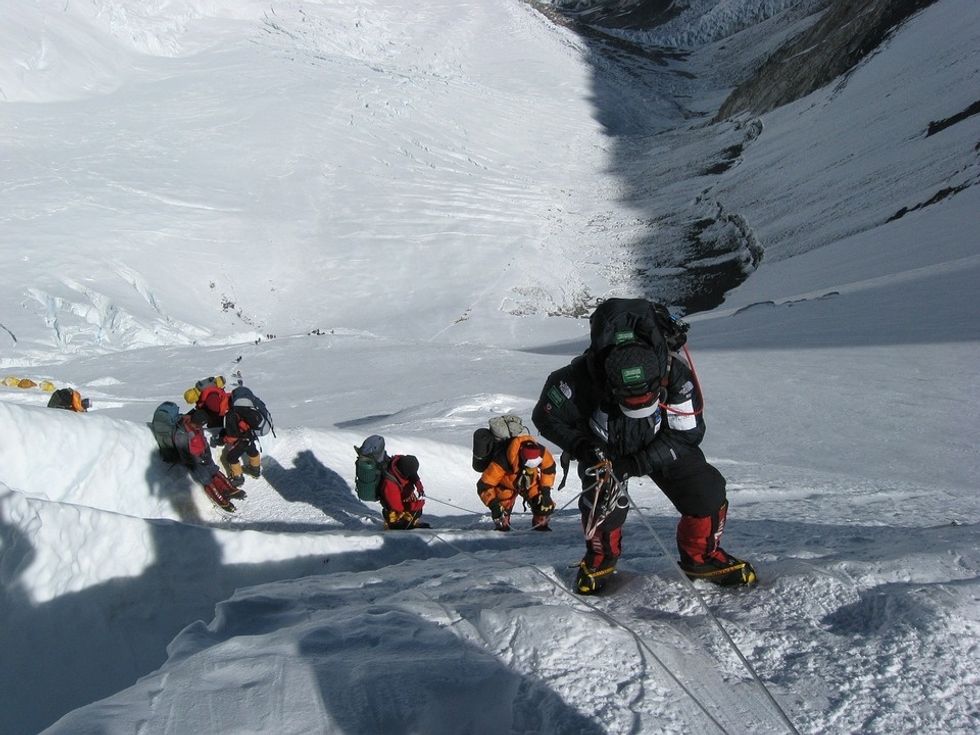 With more and more permits being given out to those wanting to climb it, and many inexperienced climbers making the attempt, a massive traffic jam ensued, with a huge line of people waiting for their chance to reach the mountain's summit.

So, like, someone should probably do something about that, right?

One of the problems is that the government of Nepal seems to have given out way too many Everest permits, so a system needs to be put in place in order to restrict the number of permits given out, avoiding the severe overcrowding. Everest permits are incredibly expensive, so they probably bring in a lot of money for Nepal, but, you know, people's lives should probably be more important.

Also, if people go to climb Mt. Everest, they should actually make sure that they can, you know, climb Mt. Everest. Don't try to do it if you are not a highly experienced mountain climber who actually knows what you are getting yourself into. You should also acknowledge the fact that if you try to climb Everest, there is a possibility that you might not make it back. What do you really even get out of it if you succeed? Bragging rights, I guess. Maybe a high five from someone?

Of course, there are some other potential solutions to the problem as well. When I went to Disneyland several years ago, I purchased a wonderful thing called a Fast Pass, which allowed me to jump to the front of the line of practically every ride in the park. It was fantastic, and I'm not sure why Mt. Everest does not use this system. Inexperienced climbers could just purchase an Everest Fast Pass, jumping to the front of the line in no time, and leaving the actual climbing to the actual climbers. Hopefully, if they start using Fast Passes on Everest, then the line won't be as long, which will allow many climbers to, you know, not die. It works at Disneyland, so I don't see why it wouldn't work here.

It seems like the massive amount of people wanting to climb Everest stems from the fact that there is only one Mt. Everest. So, perhaps we should look at investing in building a second Mt. Everest, that way the climbers can choose to climb the new one if the line on the old one is too long. I mean, we sent a man to the moon, so how hard can it really be to build a second version of the world's tallest mountain?

Or, instead of actually making the climb, you could just watch the 2015 movie "Everest" and allow Jake Gyllenhaal, Jason Clarke, and Josh Brolin to show you why climbing this particular mountain may not be such a good idea.

People who have made it to the mountain's summit have reported having to literally step over dead bodies as they climb. That sounds horrifying and traumatic. I can't imagine seeing a fellow climber in the snow up ahead, only to realize as you get closer and closer that what you are looking at is actually a dead body. That's not an experience that I would particularly want to have, but apparently, it's what is happening on Everest right now.

Is it really worth risking your life so that you can say you climbed the world's tallest mountain?

No, I don't really think so, but some would disagree.