A story of Christianity and River Rafting 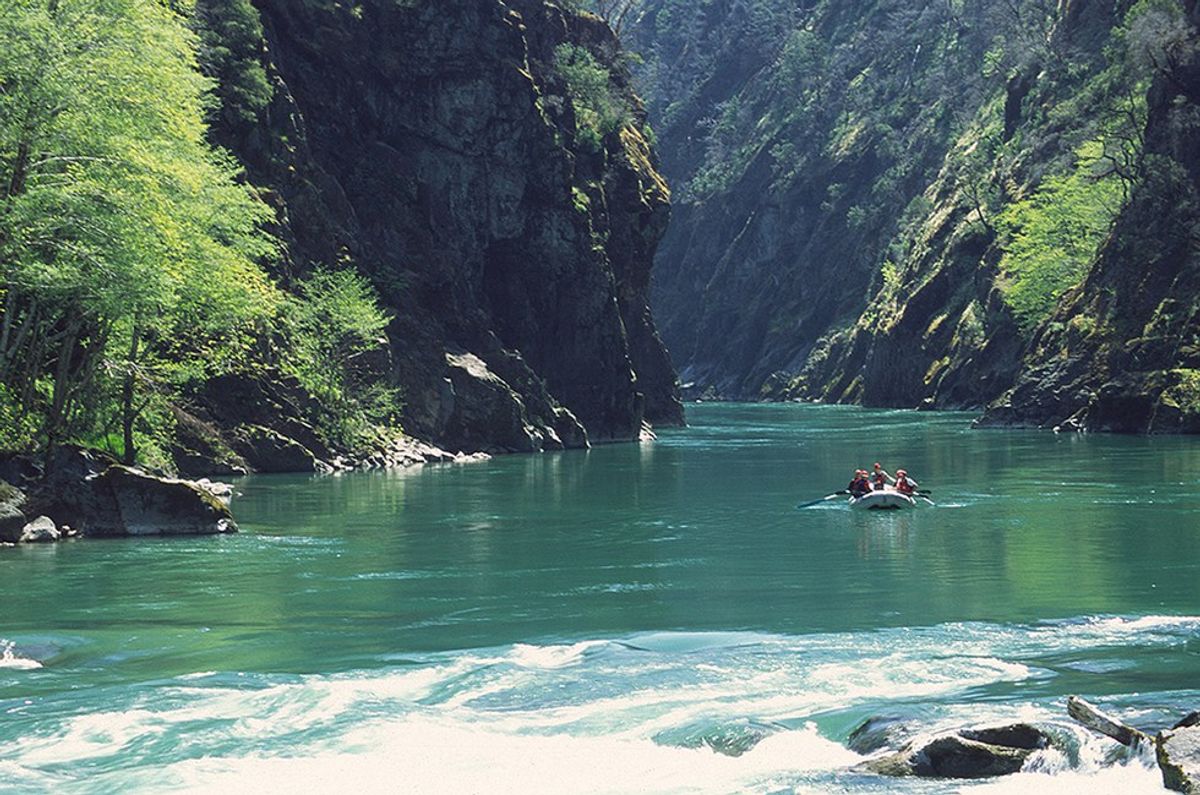 My youth group takes a trip every summer up to the California Boonies, also known as Yreka and Happy Camp. It’s an incredibly long drive, but we always have a great time, listening to the radio and various standup comics over the wireless, till we pass out of radio range. This is usually about five hours into our 10 hour trek. Then it’s a series of winding hatchbacks till we finally make it all the way to Yreka up near the Oregon border. We stop off at the local Walmart to stock up, since we are there a full two days before the rest of the groups show up.

Once we’ve set up “Man Camp” and “Chick-Ville”, the gender separate camps, we mess around and play games, go swimming in the river bend off the beach, just whatever we want. This continues for the two days until the rest of the camp starts to fill up, then the camp officially starts. “Leadership Camp” they call it, but we young ones call it
"that place we get tanned, go rafting, and eat dragonflies.” It’s a spiritual formation camp for young adults in the California/Nevada area, and as part of it we have three days of rafting, hiking, praying, and encounters with God.

When my friends and I get out on out raft with the river guide, they always ask us what our rafts name will be, and my friends and I always say “the River Rats”. It’s a poker term from Texas Hold’em, meaning those fools that bet everything they have on the “River” and not what’s in their hands. We have a total of 20 hours on the river, down Dragons Tooth and Rattlesnake. On the first rapid, Dragons Tooth, there is a rock sacred to the river, called Spit Rock. When you go by, you must hock up whatever you can onto the rock, or your raft is cursed for the rest of the rapid. This is completely accurate — one girl wouldn’t do it and she wound up getting bucked into the rapid and riding down feet first. Not a pretty sight, as you might imagine. If you manage to hit the rock, your raft is blessed and you can floss Dragons Tooth.

What is meant by “flossing the tooth” is riding your raft length wise up onto the rock and then riding it down the other side. When the time came for us Rats to floss the tooth, we remembered that rain fall had been rather low this year, and once we got up on the tooth and committed to the left path, it was too late. Down the right side, there are a few rocks and such, just enough for the ride to be interesting. Down the left…there’s just a drop, usually about 4-5 feet or so, nothing serious. This drop was now 11 feet due to the lack of rain, and we were already going down. The guide was panicking, but my friends and I just cheered and committed to the plunge.

It was amazing for all of four seconds while we were suspended and plummeting towards the water, then we actually hit, making a sound not unlike a great high five that echoed all through the canyon. The guide was still in shock, so we initiated a paddle five, which is just raising and touching the business ends of the oars in the air and slamming them into the river as hard as you can. It was a simply amazing ride down the rest of the rapids, but it was…to put it delicately…a rather sensitive one. The fall had done our rear ends no favors.

Once we made it back to camp via raft we unpacked our gear and got cleaned up for dinner. The Rats had conquered the Dragons Tooth once more. Our battle with the Rattlesnake went much the same the next day. The Rats were Lords of the River, Masters of the Raft, and nothing could ever change that.

By night, the savage River Rats would join together and partake of a meal before evening devotionals. After this, for as long as we waned, the separate churches would have a break out time, first split up by gender, for a time of confession, brotherhood, and sisterhood. The groups would then band together for what we called “Fire Time”, when anybody that needed or wanted prayer would receive it from their friends, pastors, and even complete strangers. These times were truly holy, with most of the subjects of prayer winding up in a Spirit induced stupor on the ground, praying in tongues, crying, or laughing in a manner that is so infectious that the whole camp is soon in stitches. The Rats, as the eldest members of our youth group always pray for the younger ones, blessing them, sympathizing with them, doing whatever must be done. We run water, sing, pray, and generally get lost in the spirit of the night. The Rats become disciples, ministers, brothers for anybody that needs them.

I’ll never forget those times with my brothers on the river, or the hours we spent in community under the stars, forgetting how tired we were from the day, praying, singing, and dancing the night away as we drew closer to God.