Repost Of An Oldie: Reflections on Stephen King's "The Green Mile"

Repost Of An Oldie: Reflections on Stephen King's "The Green Mile"

We live in a world of great sorrow 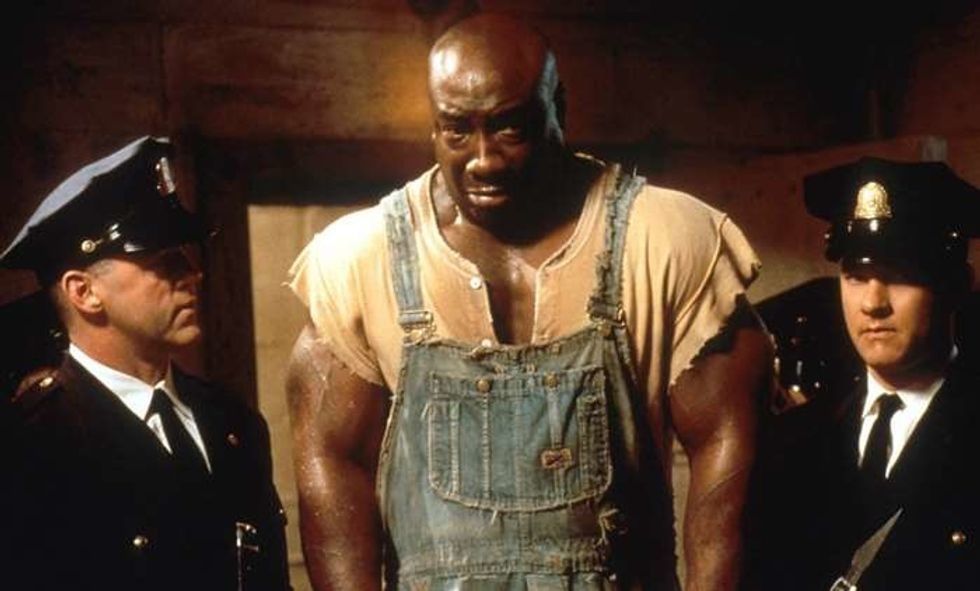 A few days ago, I watched Stephen King's "The Green Mile," starring Tom Hanks. John Coffey, an innocent man with the power to heal, is wrongly accused of raping two little girls and "rides the lightning." But he tells Tom Hank's character that he's OK with it, because he's tired, tired of all the pain in this world, stabbing like glass in his mind all the time.

It can be easy to ignore half the time: all the great, heaving pain in this world, in our contemporary, sanitized America.

But we can't always hide from it. Hedges can only grow so high and so thick.

How much can we love? Knowing that really loving means hurting. John Coffey sacrificed when he healed. It took something out of him.

How much pain can we take?

Not much. Not much on our own.

The "green mile" that the film refers to was the stretch of green flooring that ran from the jail cells to the room housing the electric chair.

Someone said it near the end of the movie: all of us are walking the green mile, some faster than others.

And we get so many scars, so much hate, on that mile.

And we give some too, some hate and some scars.

Sometimes I wonder if rain showers are not God's tears, weeping for the evil and woe of this world, if rivers and creeks do not sing of sorrows. And yet all the stories, all the tears, can have hope.

Can have hope because tear-stained cheeks commanded a Lazarus back to life.

Does He not know our woe, He who took the punishment for every filthy, bleeding sin on the rugged cross, who experienced millions of hells as He was separated from God the Father?

Jesus. He who hates the darkness. Who took upon himself murders, rapes, lust, pride, selfishness, adultery... that He might defeat sin, growing like death, in our lives.

He loved the world so much that He burdened himself with the enormous weight of all its darkness.

His act gave enemies a radical chance to become beloved sons and daughters.

When we despair of all the darkness, Jesus' holy hands hold out hope and cradle the hearts of the hurting.

Once we are his,

"... Neither death nor life, neither angels nor demons, neither the present nor the future, nor any powers,neither height nor depth, nor anything else in all creation, will be able to separate us from the love of God that is in Christ Jesus our Lord." — Romans 8: 38-39

They found John Coffey holding the two little girls at the edge of a river, blood everywhere. It had been too late for him to heal them. He certainly looked guilty.

As that hulking, gentle man sat down in the electric chair, dozens of grieving people shouted hate at him, said they hoped he'd die slow, and tears ran down his face. He begged in a whisper not to be masked, not to die in the dark... because he was scared of the dark. The crowd they jeered and walked out in triumph, deceived. Coffey's guards, now friends, wept bitterly. They watched the horrific death of a great man celebrated. What twisted nausea.

And so did the crowd jeer at our Savior on the lonely hill of crosses, celebrating the death of the God who made them.

The clouds, they weep, and creation, it groans. But they weep for what is a passing thing. For the millions of 'cricks' and streams of the world, they run with His blood, and they sing of a marvelous resurrection, of a cleansing flood