Why Children's Toys Don't Need Gender Labels
Odyssey
CurrentlySwoonLifestyleHealth & WellnessStudent LifeContent InspirationEntertainmentPolitics and ActivismSportsAdulting
About usAdvertiseTermsPrivacyDMCAContact us
® 2023 ODYSSEY
Welcome back
Sign in to comment to your favorite stories, participate in your community and interact with your friends
or
LOG IN WITH FACEBOOK
No account? Create one
Start writing a post
Politics and Activism

Challenge your thinking beyond pink and blue. 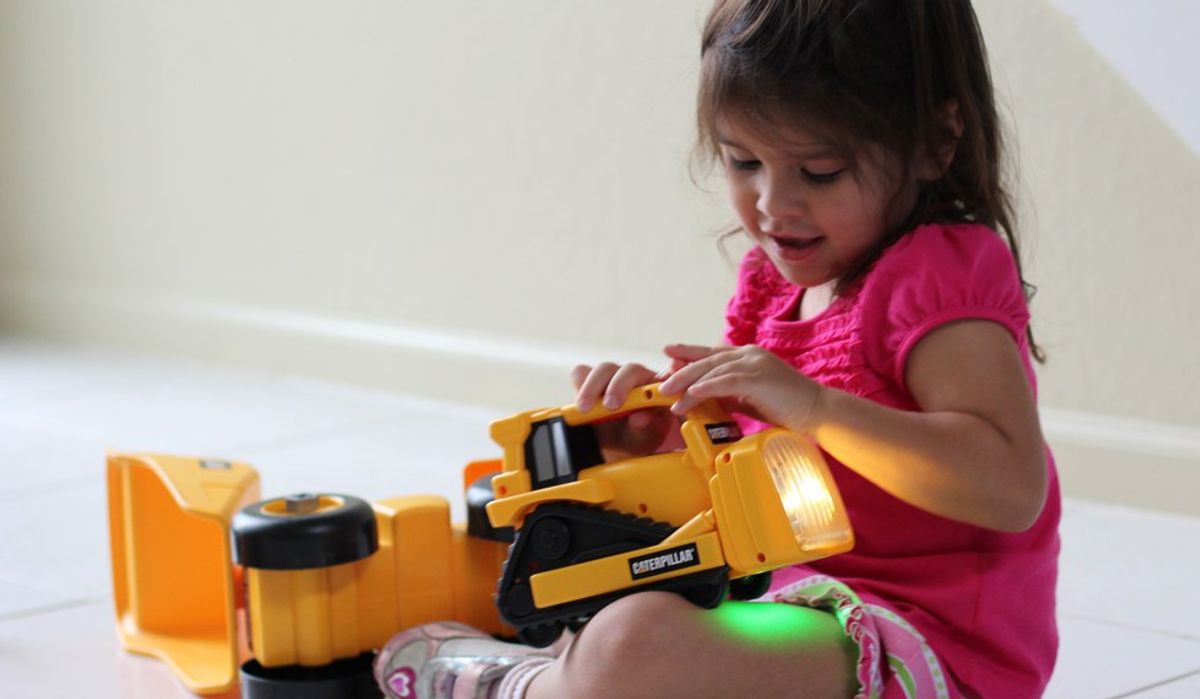 Diary of a Working Mom

The little girl squeaks, “I want that one, mommy!” as she points to a Transformer at the opposite end of the aisle. Her mother shakes her head and says, “I’m sorry, honey, but that’s for boys." Upon looking at the shelves in front of her stuffed with Barbie dolls and My Little Ponies, she asks, “Why can’t I play with action figures?”

Like this mother I overheard talking to her daughter at a local store, there are some people who advocate the labeling of toys by gender. They argue that gender labels are necessary for promoting what is masculine and feminine. Without them, social and sexual relations would be hindered because there would be too many feminine boys and masculine girls. Besides the ease of having toys organized by gender when selecting gifts, toys labeled — and ultimately separated — by gender prove to be obsolete.

Sure, when men were working full-time as manual laborers and women were doing daily errands and household tasks, gender roles were prominent. A family needed someone to financially support them, as well as someone to manage the house and the kids. But, many decades have passed, and young women do not spend the majority of their adulthoods as stay-at-home moms.

As a matter of fact, women have contributed nearly $13,000 to the average family income and expanded the U.S. economy by $2 trillion since the 1970's, according to the White House's Office of the Press. An increasing amount of girls are aspiring to be scientists, police officers, and politicians in a competitive, previously male dominating workforce.

Likewise, men are no longer expected to single-handedly support their families. With additional income coming in from their wives, many husbands are able to perform duties around the house and directly care for their children. (Not to mention the fact that, nowadays, some families are made up of two dads or two moms, which only proves that these gender roles are archaic).

As societal and marital expectations shift, children need toys that will prepare them for all aspects of life. Boys and girls should play with a variety of toys that enhance a variety of skills. This is crucial in the development of their own unique aptitudes and talents.

When a young girl sees that an aisle is called “Girls’ Building Sets,” and not just “Building Sets,” her choices are drastically limited right before her eyes. Even though boys' and girls' building sets sharpen the same group of skills, the gender labels signify that there's a difference between what a girl and a boy can do.

Children spend a large percentage of their time playing. According to the Toy Industries of Europe, child-centered play influences early development by 33%, as concluded by nearly 40 different studies. LEGOs and K'NEX, which are known as toys for boys, encourage growth in spatial skills. Baby dolls and stuffed animals aid the development of nurture skills, which are important for children who want to become caregivers one day—a life goal that not just women share.

Authoritative figures must provide a diverse spread of toys. You would not want to shy a child away from being the best person they could be, so why promote gender labels that enforce this?

Boys and girls are inadvertently affected by gender-conforming toy choices.

Once a child is aware of what gender they are, usually before the age of three, they begin to change their behaviors. This is the time period, known as self-socialization when boys no longer want to admit to liking anything girly and vice versa. Children receive punishments and rewards through differential gender reinforcement. It is determined by whether or not they choose the “right toy” for the “right body” and what their authoritative figures do in response to those choices.

Although they are only toddlers, boys and girls make preferences on what is acceptable and unacceptable. It is based on their surroundings and the reactions they get—like being told "no" to a Transformer when you're a girl, or being made fun of at school because you're a boy who has a pink backpack.

Unfortunately, many figures in a child's life make them feel as if they must like toys from their gender stereotype, even if it's unintentional. By eliminating gender labels on toys, children will be allowed to enjoy any toy without any feelings of guilt.

Children should not feel ashamed by a love for a toy that crosses imaginary, socially constructed gender lines.

If toys were not artificially categorized, children could grow mentally, physically and emotionally without the lasting burden of gender stereotypes. Children must be able to choose toys based on their individual strengths, abilities, and interests.

Stores can label their toy aisles in whichever way they’d like—as long as they are not also labeling their children.