Can You Be A Pro-Life Feminist?
Odyssey

Can You Be A Pro-Life Feminist?

How modern-day feminism extols choice -- and whether this is always beneficial. 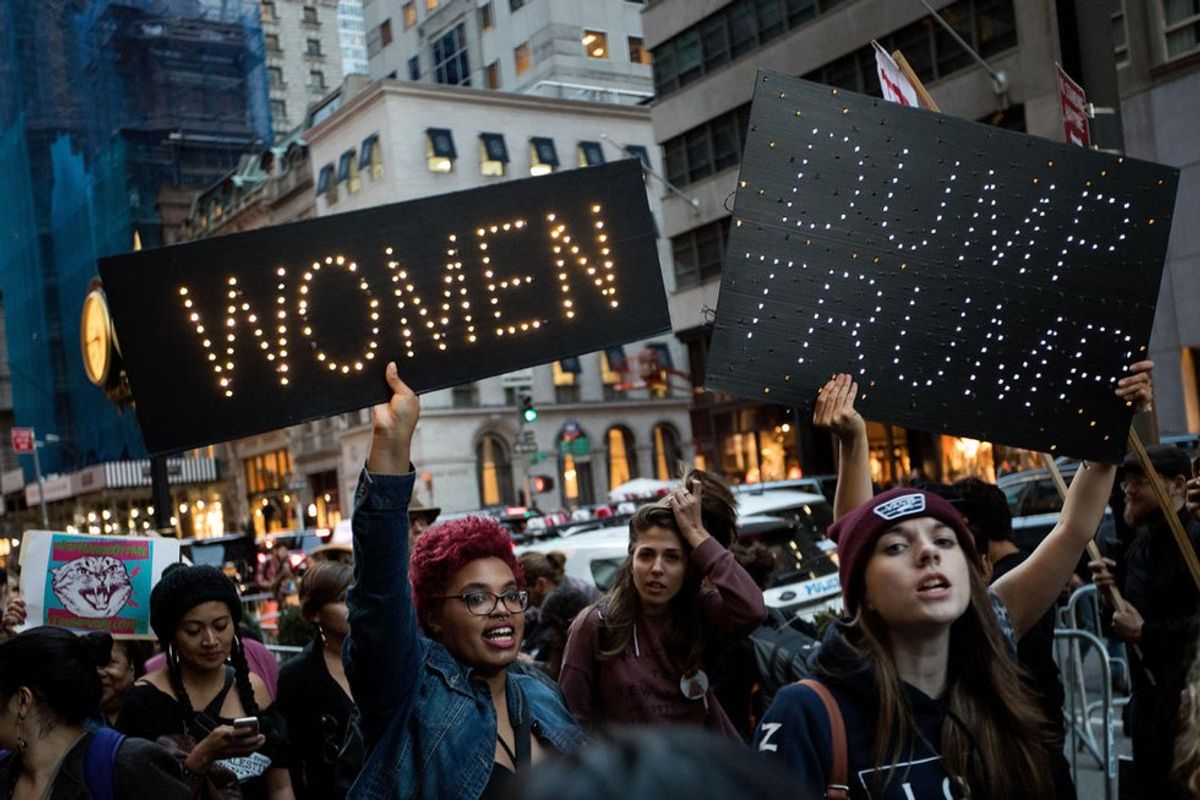 As Donald Trump, potential sexual assaulter, misogynist, and future President prepares to take office, women across America are gearing up to show their opposition through a women’s march on Washington. This march has, however, come under fire recently despite its noble pretense, as it is alleged to underrepresent women of color and exclude women who are pro-life.

Of course, it goes without saying that a social movement that does not include a diversified representation of its core base cannot effectively accomplish its goals. Critics frequently address the feminist movement’s lack of intersectionality, and tendency to exclude women of color. This is valid, and should be discussed within the context of Trump’s America. In contrast, pro-life women’s concerns are slightly more complicated. While the feminist movement has seemed to appropriate pro-choice ideology, even conflating the two, the fact remains that many women who consider themselves to be strong feminists are also staunch pro-life advocates. While these may not be the women who place themselves outside of Planned Parenthood in a disgusting and obtrusive fashion, they still believe that a fetus’ right to life trumps a women’s right to choose. And considering the importance of both these viewpoints, can they be blamed for entering pro-life territory?

Because of the inherently controversial nature of abortion, the pro-life ideology cannot be blindly written off as dichotomous with feminism. Unfortunately, it remains precariously difficult to balance the two. As Erika Bachiochi explains for CNN, allowing pro-choice ideology to be calcified in the decisions of the Supreme Court undermines feminism. This is certainly a viewpoint we do not hear often. However, Bachiochi explains that allowing abortion essentially erodes the accountability of men, empowering them to have meaningless sex without facing the consequences of an unwanted pregnancy. Because of their ability to run around and have unprotected sex without feeling beholden to the woman (naturally, all men are noncommittal sex addicts who won’t call you back, right?), men can now chase women with increased voracity and objectify them even more! As nuanced as this argument is, it unfortunately does not compel me, and is quite frankly condescending.

It’s absolutely necessary to evaluate policy issues from this sort of critical perspective, in order to understand if they do in fact undermine other goals that fall under the umbrella of their movement. Yet when you compare the dangers Bachiochi warns of, they not only are poorly thought through and ignorant, but also fail to hold weight when evaluated against the realities of abortion. Sure, it might be damaging to women everywhere to legitimize their objectification (which, to be certain, ought not to be equated to meaningless sex), but I am sure the women who get abortions to save their own lives, or who are victims of sex abuse, or simply cannot raise a child at that point in their lives, could not be bothered with this excuse for stifling choice. Bachiochi’s argument blindly characterizes men as sex-driven pigs who will use Roe v. Wade to further their own malicious agenda – and conveniently forgets about all the men who will get a woman pregnant and leave regardless of whether or not they abort. Further, assuming we live in Bachiochi’s world where men are Not To Be Trusted, isn’t it better to permit abortion insofar as it allows women to escape the malevolent actions of men? It seems her article only serves to trivialize the serious and harrowing topic of abortion, which remains an unappealing yet necessary option for so many women.

These are all interesting discussion points as it relates to the legalization of abortion. This therefore begs the question: Is it discordant with the fundamental tenets of feminism to be pro-life? When we consider the issue of pro-choice vs. pro-life critically, this seems to be a legitimate possibility. After all, pro-choice activists will remind you that being pro-choice is not analogous to being pro-abortion, and we hold this standpoint in order to empower women. Under this framework, abortion does seem to fall under the feminist umbrella – men legislate this women’s issue citing wild falsehoods, men have the choice to abandon a pregnancy in the same way women do not, and allowing a woman to make her own choices about her own body appears to be peak feminism.

However, we must look critically at the definition of feminism itself, which posits that a feminist is one who believes in the political, economic, and social equality of the sexes. Does this include the ability to make choices about your own body? Yes. How about the ability to make choices about your own body when it affects another entity such as a fetus? That’s questionable. From a purely definitional perspective, abortion doesn’t seem to intrinsically associated with the goals of feminist. Yet it is not fair to look at it this way – insofar as pregnancy, and therefore abortion, disproportionally affects women, it is a women’s issue and thus a feminist one. Just because it is a feminist issue, though, does not justify us excluding women from the movement.

It is not productive to exclude women from the feminist movement – here’s looking at you, white feminists. We cannot allow feminists to tell other women they do not belong to the movement, simply because they do not adhere to all feminist conventions. Just as you don’t have to fit a specific mold to be a woman, so too can feminists wield varied ideologies and differing opinions.

Indeed, while a woman like Tomi Lahren voices disturbing views, it is deeply troubling to see her actively identify as not a feminist, inasmuch as her ability to build a platform for herself and become a powerful woman is exciting at best. Of course, to the extent that urging the overturning of Roe v. Wade is incredibly dangerous and promises devastating effects for women all over the country, I would implore pro-life feminists to fully consider the wide-ranging social, medical, and legal implications of this. However, this is not an article to articulate the benefits of being pro-choice. I simply wonder if we can intertwine this issue intimately and irrevocably with feminism.

I fully believe Roe v. Wade to be a fundamental cornerstone of our political equality and hold that its overturning would be disastrous in so many ways. If you don’t believe a woman should have the right to decide what happens in her pregnancy, I think you ought to examine your evocation of feminism and consider the limitations of your own perspectives. Yet if that’s how you feel, while I disagree with you, I don’t think it’s my job to say you’re not a feminist.