You Think That We Don't Need Feminism Anymore?
Odyssey

You Think That We Don't Need Feminism Anymore?

Before making such a bold statement, please examine your privilege. 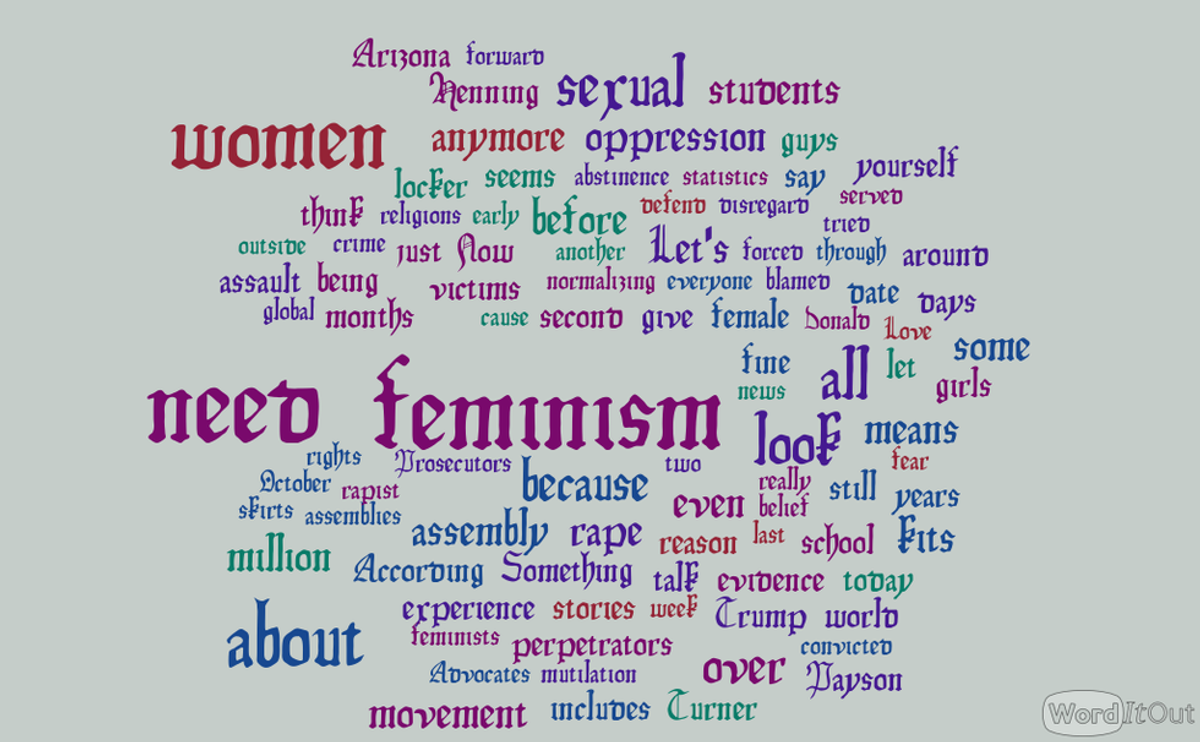 These days it seems that everywhere I look, I see an article proclaiming that we do not “need” feminism anymore. The idea that we have done all that we need to do and we are just “fine,” is a very popular one these days. I find this incredibly ironic because it also seems that whenever I am reading the news I am seeing yet another story about why we do, in fact, still need feminism. So, if you, dear reader, are someone who thinks we do not need feminism and are “annoyed” by feminists, I hope this will give you a new perspective.

Let’s look at some local stories:

A high school in Payson, Arizona recently invited Brad Henning, author of “Don’t Take Love Lying Down,” to come and give two assemblies to the students. The first was mandatory for all the female students. They were pulled out of class and talked to about abstinence. However, the speaker did not stop there. The women were also lectured about how they need to dress in a way so as not to turn the guys on because of their “God-given sexual urges.”

Here’s a quote from the assembly via the Payson Roundup: “The girl stands in the mirror and decides, ‘OK, this is war’ and she puts on spaghetti straps and mini skirts,” said Henning, “What do you want the guys to look at — your eyes?”

He gave his second assembly to the male students and discussed how to get a date, how to keep a girlfriend and even what to talk about on a date. Oh, and that assembly was after school and completely optional.

But we don’t need feminism.

Something else that really struck me this week was when I read that just last month there were over 6,424 untested sexual assault evidence kits because of a lack of funding in Arizona alone. Advocates fear that this will discourage victims from coming forward and basically let the perpetrators off the hook. Let’s think about this for a second. These rape kits gather evidence in hopes of the finding the rapist. Even if half of these offenders have been caught through other means besides testing the kits, that means that over three thousand rapists have gotten away with their crime. According to Rainn.org out of every 1000 rapes, 994 perpetrators will walk free.

At this point, everyone is familiar with the audio recordings that were released in early October of Donald Trump bragging about sexual assault. The tapes are reason enough for the existence of feminism to be valid but even more so, when Trump tried to defend it by saying that it was simply, “locker room talk.” He is clearly normalizing rape culture and passing it off as if it is something that happens all the time in locker rooms around America.

But feminism is not relevant anymore.

Brock Turner was convicted of rape on March 30, 2016. Prosecutors suggested that Turner be given 6 years in prison. He was sentenced to 6 months in jail on June 2, 2016. He only served 3 months before being let out on good behavior. He blamed everything but himself when giving cause for the act: Alcohol, promiscuity, and peer pressure. He never recognized that the reason for his sentencing is because he raped somebody.

But there is no need for the Feminist movement.

Now for some global statistics:

The simple definition of feminism is "the belief that men and women should have equal rights and opportunities." To say that this should not exist anymore, to say that we have no need for this movement is to disrespect women all over the world that still feel oppression today.

So, before you make the bold statement that, “we,” do not need feminism, think about what that pronoun encompasses. Maybe you, have not felt the ugly hand of oppression, but feminism includes all women. This includes women of different races, ethnicities, sexualities, social classes, body types, and religions who experience oppression differently than yourself. Please, look outside of yourself and analyze your privilege before you disregard a movement that means so much to millions of women around the world.