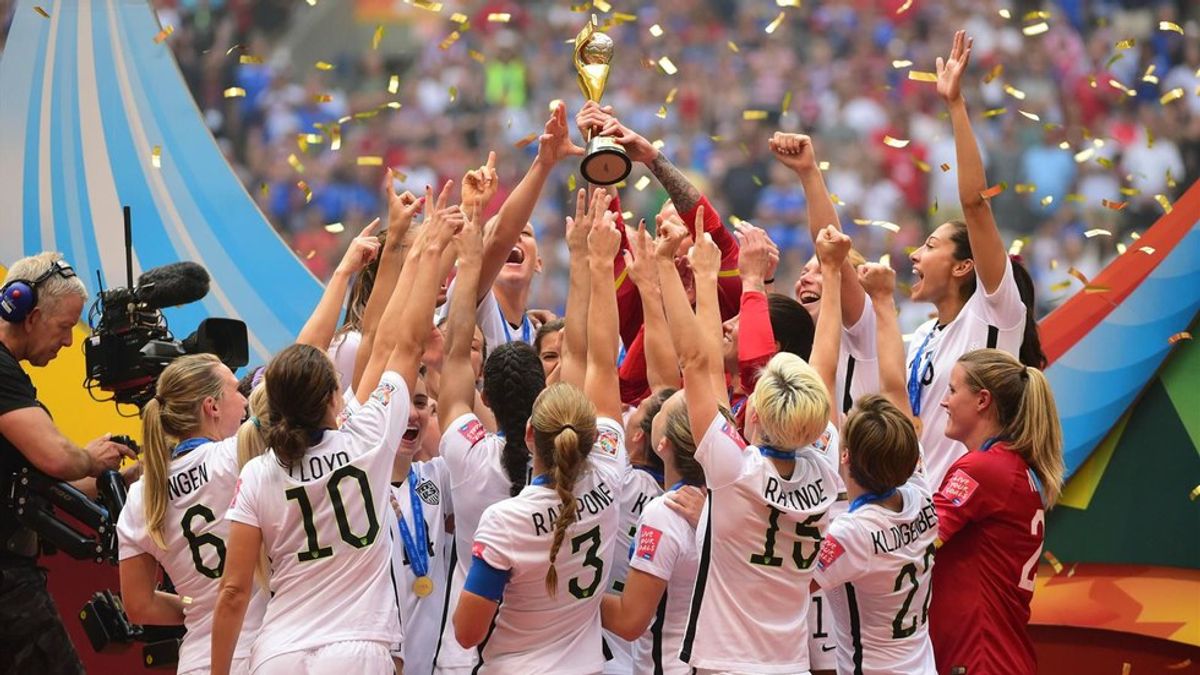 With the United States cream-of-the-crop athletes away in Rio raking in the wins (and breaking their own world records - ahem, Katie Ledecky...), I think it's time to bring attention to something that goes much too ignored in today's society...the unfair pay gap between male and female athletes.

According to iwpr.com, "Women, on average, earn less than men in virtually every single occupation...In 2015, female full-time workers made only 79 cents for every dollar earned by men, a gender wage gap of 21 percent." So in general, women who do the same amount of work as men can expect to get paid around 3/4 of what a man gets...why? Is it because men "do more work"? Likely not. Studies show that jobs predominately done by women already have lower wages set than jobs predominately done by men. This is completely unfair in any workplace, but the pay gap between male and female athletes is so staggering that it's strange the masses have seemingly ignored it for so long.

Let's take a look at professional tennis player Serena Williams' salary. Though she has been named the highest-paid female athlete (and for a good reason, obviously), she still earns less than her male counterparts. Tennis Equal Pay Activist Billie Jean King "helped" (forced) four of the major tennis tournaments to pay their men and women equally, but this didn't help many of the other major tournaments, and still leaves Serena Williams making a mere $450,000 per win to male player Roger Federer's $700,000.

Now, let's move along to perhaps the most unfair of all - the Women's U.S. National Team. This amazing soccer team has broken records and defeated all odds on the soccer field...or should I say soccer "field", because they're forced to play on AstroTurf, whose hard surface and small plastic pieces make ball control much more difficult and dangerous. Small side-note that the men get the Earth's natural grassy ground, and haven't played a single game on that dangerous turf in at least two years. The women didn't let that stop them, however, going on to win the World Cup in 2015 and pocketing $2 million dollars for this feat. Sounds great and all, but the men's team, who haven't even made it past semifinals in eight decades raked in $9 million for losing out in the 16th round in 2014. The men's national team has also never won a World Cup.

Let's think about this for a second - for hard work, effort, blood, sweat, AstroTurf, tears, AND the Cup, the women received $2 million. For all of the above MINUS the dangerous AstroTurf and the World Cup, the men got paid $9 million to go home and watch the women take home their win on International Television. Just this year, the Women's National Team brought in more revenue in the 2016 fiscal year (a World Cup year). U.S. Soccer also expects the women to bring bring in $17.6 million versus the males' $9 million in revenue this year, however, still only pays its female players $1,350 for a win compared to the mens' maximum of $17,625 for their (much rarer) victory. Although the U.S. National Soccer Teams aren't always guaranteed to win (as we saw in Rio), at least they get paid $5,000 for effort...oh wait, that's only the men. In short, brutal summary, the men get paid win or lose. The record-breaking women (who recently broke yet another world record, this one for most watched game) barely even get paid if they win.

According to Bayless' Article "Equal Play, Equal Pay": Female Athletes Play for Respect in Rio, "The women do receive a base salary of $72,000 for playing on the national team and some benefits that the men do not. However, if both teams were to win all 20 matches they play outside of tournaments in a year, a female player would be paid $99,000 total (including base salary) while a male player would be paid $263,320."

Though the USWNT is expected to outperform the men's again in 2017, the male soccer player's salary is still higher. Improvements need to start now, and hopefully the exposure of the unfortunate facts in this article will inspire readers like you to take action against women's unfair pay.