No, Ariana Grande Is Not Calling Herself 'God' In Her New Single

'God is a woman', the third single off Ariana's album set for release in August, contains a meaning so much deeper than sex. 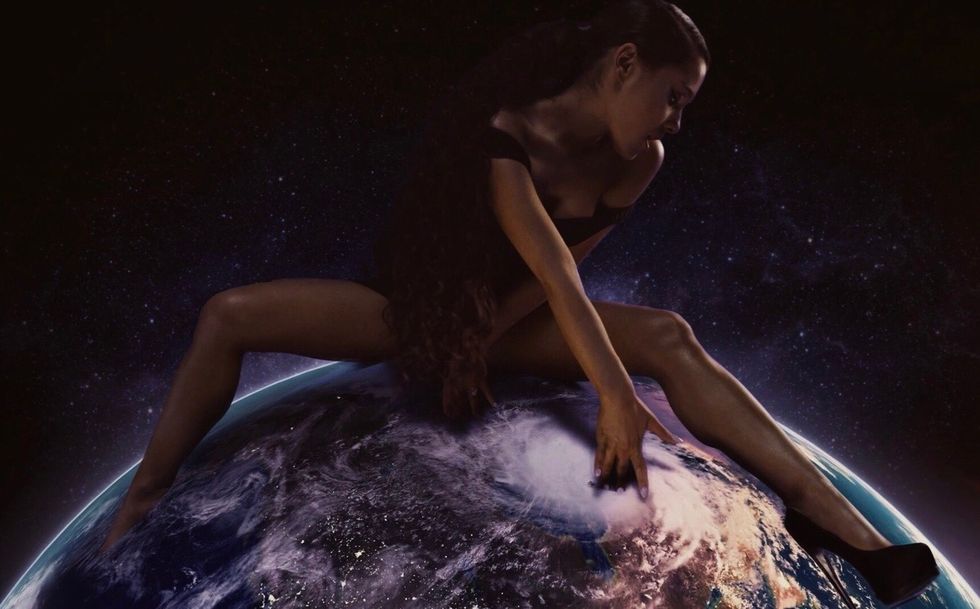 Ariana surprised fans by releasing 'God is a woman' at midnight on July 13th. Being an Ariana Grande superfan, I listened to the song about three times before dozing off to sleep, excited for noon when the official music video would be released.

At first, I was kind of bummed; I initially thought the title hinted that the song would be about women's equality, promoting female empowerment. Yet, after listening, I believed that it was just another lusty song about the power of women during sex.

Power is power; I knew that regardless of her intentions, her song was meant to empower women. If the song told a story about how important a woman can feel or be considered by her male partner after an amazing sex session, she is still telling a story about an empowered woman nonetheless.

However, as I started to listen to the lyrics more closely, I realized that the song has a stronger meaning, deeper than just sex. For example, the pre-chorus is: "And I can be all the things you told me not to be / When you try to come for me, I keep on flourishing". Ariana is saying that no matter how many times people try to bring her down or change her, she will always be true to herself and persevere.

I believe Ariana purposely released the song twelve hours before the music video rather than releasing them simultaneously. I think she wanted us to listen to the song initially by taking in the lyrics and topics floating at the surface of the song without digging too deep into the meaning of it. She must've wanted us to explore the underlying themes of her song as we listened more and more, and finally laid our eyes on the video.

The music video, which was directed by Dave Meyers and is visually stunning, starts off with Ariana standing on top of Earth, swaying amongst the stars of the galaxy. After laying on a pedestal beneath a bed of squirming men, an oversized Ari is shown looming over miniature-sized men throwing words of hate and discouragement, just to be bounced back off her huge body. If this doesn't denote the idea of women rising up against the criticism or discouragement from men, or society in general, I don't know what does.

Although religion is a huge theme within the song, both religion and creation are at the center of the music video. Ariana sits on top of Earth with her legs spread, as if hinting toward the creation of our planet and mankind. In addition, a clip of Ariana's womb growing from conception is shown as the following lyrics play: "But you're different from the rest / And boy if you confess, you might get blessed". Immediately after, she towers over three men as she nurses them while she sings, "See if you deserve what comes next".

The message of women being seen as a powerful life source flows throughout the video. The masterpiece screams women's empowerment towards the end, when she throws a giant hammer, resulting in the shattering of a glass ceiling. This alludes to the famous metaphor regarding certain groups of people being restrained from reaching a visible goal they desire to reach. As Ariana literally breaks the glass ceiling, she sends the message that women have the ability to cross the barriers that society has made.

An unmistakably religious part of the video is introduced several seconds before the breaking of the ceiling. Other than hearing Madonna's voice, this part is so memorable because it is where religion and feminism meet; the monologue Ariana mouths states that anyone who tries to bring her and her fellow women down will be met with retaliation, and this is when they will know her name is the Lord.

Symbols of femininity are very apparent, as well, such as when a pair of women's legs are spread above Ariana after she breaks the ceiling. It is also worth noting that the image painted in the river Ariana lays on at the beginning of the video is a vagina. I believe that these references to the female anatomy further reinforce the theme of women as creators.

The last part mirrors Michelangelo's The Creation of Adam; however, Ariana, surrounded by other young women, reaches out to touch another young lady. This renowned painting is known to denote God creating man in the image of Himself.

Although Ariana lays in the place where God so famously lays in the original painting, I don't believe she is calling herself God. Rather, I believe she is making the statement that women can be seen as powerful figures of creation, such as God is considered to be.

God has traditionally been portrayed as a male. By Ariana presenting women in such an omnipotent way, she dares listeners and viewers to consider the idea of women in power. As she beautifully presents women in such a strong and influential light, she strikes the match illuminating a world full of empowered woman.

I'm sure this sneak peek Ariana gives us can become a reality very soon thanks to today's inspiring women, one of whom is the singer herself.