Why They Come, What It Takes, & What We're Missing 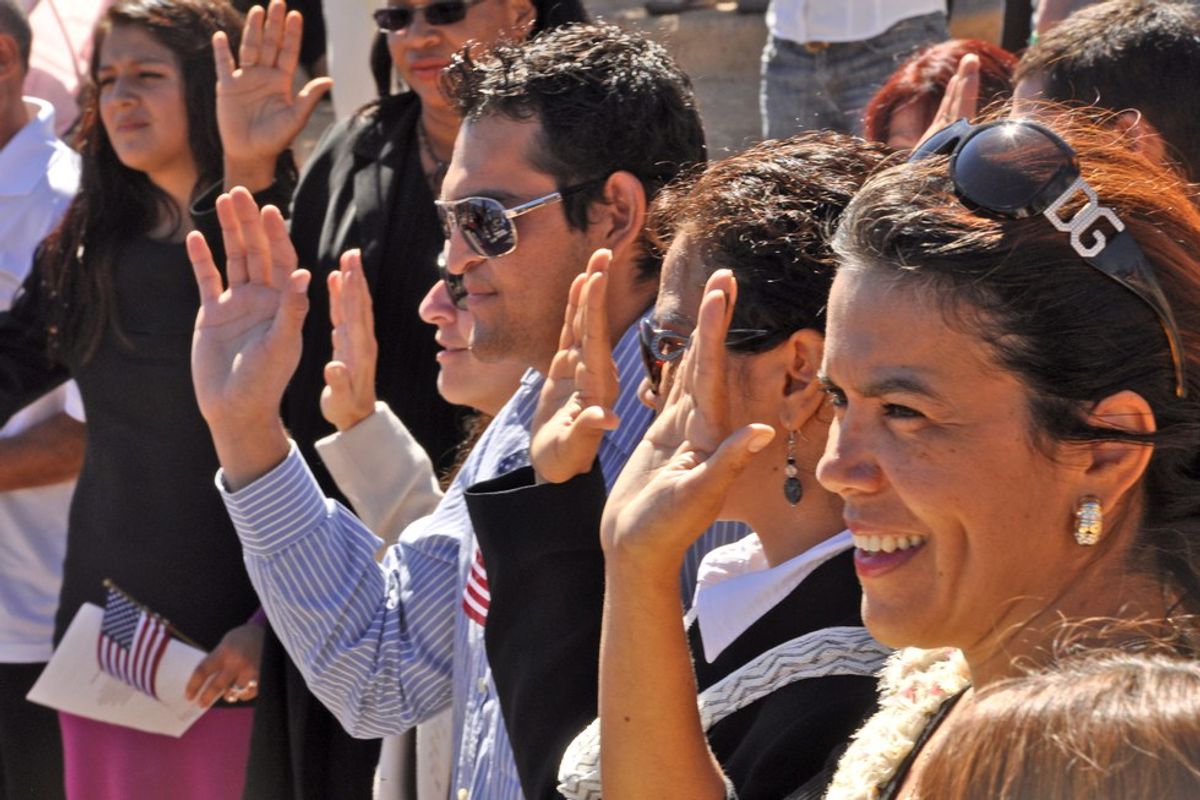 Due to their previous legal status, two individuals will remain anonymous and be referred to as Sarah and Margarita, respectively.

When Sarah came to the US, she had no intentions of staying. With the economy of her native Ireland in shambles, she decided to travel the world, and with her mother’s blessing, she came to New Jersey with two suitcases and $600 in 1988.

Soon after she arrived, though, she met her future husband, a native US citizen. They fell in love and dated for the next several years before becoming engaged in 1992.

Getting married, however, would not prove a simple matter. She had definitively transformed from visitor to immigrant, which meant a slew of government processes and applications they could scarcely anticipate.

One frequently hears the words “complicated,” “lengthy,” and “expensive” when talking to immigrants about their experience trying to enter the country or adjust their legal status. Most wait several years to attain residency and citizenship, paying thousands of dollars between government fees and immigration lawyers, all while trying to navigate a complicated and inundated federal bureaucracy. They leave the familiarity of their homeland (and often the companionship of close family and friends) and enter a new culture where language barriers and different customs can require a lot of adjusting.

As criticisms increase about the United States political system, US immigrants have insightful perspectives on what it takes to enter the country, why it’s still worth doing so, and what many born and raised in the country may simply be overlooking.

Even though she knew it would be difficult to reenter the US after overstaying her tourist visa by several years, Sarah wanted to visit her family before her marriage. She went back to Ireland, and she and her fiancé began the application process in February 1992. They spent the next 9 months and $5,000 submitting paperwork, being interviewed, and having background checks performed.

“It was intense and complicated,” she recalled. “I had to have references… proof of an offer of a job. My husband had to prove his employment, future prospects, references, [and] bank accounts.”

The list went on. A search for criminal records and any court hearings in Ireland, medical exams, etc.

She was eventually cleared to come back, and she and her fiancé were given a window of 90 days to get married.

The forms, applications, fees, interviews, and vetting all continued as Sarah progressed through the stages of conditional residence, permanent residence, and the periodical renewal of her green card thereafter.

She applied for citizenship several years ago but was denied—solely for sending $5 too much for the application fee.

Michael Lim, a senior at Southern Virginia University, expressed similar sentiments. A native of the Philippines, he came to the US when 11 years old and gained citizenship in 2012.

Lim hoped to help his cousins come to the United States. When asked what it’s like trying to help family members immigrate, he knowingly laughed and answered, “It’s a very complicated process.”

“They were like my older siblings. My mom raised them, and they’re basically like a brother and sister to me.”

However, Lim legally can’t do much for his family members unless they actually are siblings. Instead, he is financially positioning himself to be able to sponsor his cousins’ daughters. If he can show that he can financially support them and be their guardian while they attend school here, it improves their chance of getting a visa. Even then, he admits, there are no guarantees they can stay unless they marry US citizens or get hired by companies that will help them get a work visa.

For many with limited financial means, paying for illegal passage seems like a better investment. That’s how Margarita did it when she came from Mexico in 1992, which she admits isn’t ideal.

“Sometimes they deny you a visa. We don’t have the money to waste on that. It’s not that you’re wasting it, but you’re spending… and nothing assures you that they’re going to give you your visa,” she says.

They could put about the same amount of money into paying human smugglers, or “coyotes”, to get them across the border. While there’s also no guarantee with a coyote, many feel that they can better trust the outcome and it’s more affordable.

“It’s not certain that you’re going to arrive at your destination… you never know. It’s dangerous,” she said.

Despite the difficulty, complexity, cost, and risk for some, they keep coming. Every year, the United States receives about one million legal immigrants and likely hundreds of thousands of illegal immigrants based on the number apprehended by the Border Patrol last year.

When asked what natives of the US may be blind to about their own country, some, Matt Hafen, focused on misunderstandings about immigrants. While not an immigrant himself, Matt married a fellow student from Brazil while attending college.

He noted concerning his wife, “She’s obviously very sensitive to a lot of the remarks that are made about immigration… It’s what the public makes of comments that are said about immigrants coming to the country that become hurtful.”

Margarita expressed similar concerns. “They haven’t suffered the way the immigrant has,” she commented.

(President Duterte’s anti-drug crackdown has resulted in the deaths of over 2,000 individuals connected to the drug market in the Philippines since June of this year.)

“He’s almost given a license [for these people] to be killed. That’s not something that can really happen in the United States,” Lim asserted.

He also explained that many Asian Americans understand what he calls, “the work of being an American.”

“Because [Asian Americans] are coming from a system that is much more unfair to them, when they come here, whatever obstacles that may be in their way, it’s much easier for them to overcome compared to their previous position,” said Lim.

Sarah expressed similar sentiments. When she left Ireland in the late 1980s, economic opportunities were almost non-existent except for those born into a well-positioned family. By her estimation, about 90% of her graduating class left the country, many going to Iceland, England, Germany, and the US.

“There are so much more opportunities to make something of yourself in this country. I think [people who grew up here] don’t see the forest for the trees sometimes… I love being Irish, but American would be my second choice.”

Since arriving over 20 years ago, Sarah says she has always had a job and been a business owner multiple times. It disappoints her to see that many who grow up in the US don’t take advantage of the opportunities afforded them.

Emmaline B
The Narrative
47743
https://unsplash.com/photos/O0T1SIgHAfM