I hear you over there, Bible Bob. 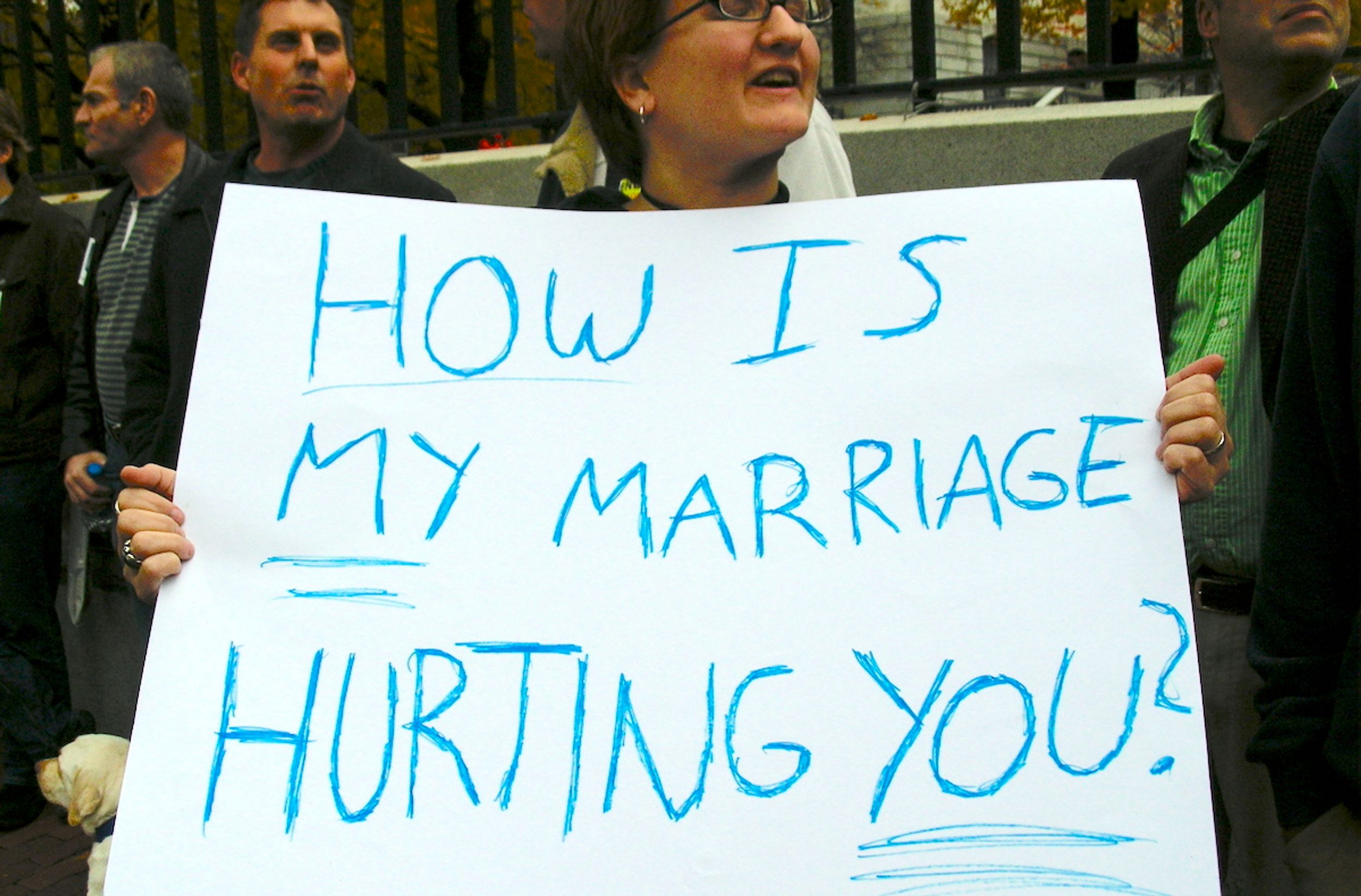 I promise you did read that right. Not what you were expecting me to say, right? Who another person decides to marry will never in any way affect my own marriage whatsoever. Unless they try to marry the person that I want to, then we might have a few problems.

As a kid, I was raised, baptized, and confirmed into an old school Irish Catholic church in the middle of a small, midwestern town.

Not exactly a place that most people would consider to be very liberal or open-minded. Despite this I was taught to love and accept others as a child, to not cast judgment because the only person fit to judge was God. I learned this from my Grandpa, a man whose love of others was only rivaled by his love of sweets and spoiling his grandkids.

While I learned this at an early age, not everyone else in my hometown — or even within my own church — seemed to get the memo. When same-sex marriage was finally legalized country-wide, I cried tears of joy for some of my closest friends who happen to be members of the LGBTQ community.

I was happy while others I knew were disgusted and even enraged.

"That's not what it says in the bible! Marriage is between a man and a woman!"

"God made Adam and Eve for a reason! Man shall not lie with another man as he would a woman!"

"Homosexuality is a sin! It's bad enough that they're all going to hell, now we're letting them marry?"

Alright, Bible Bob, we get it, you don't agree with same-sex relationships. Honestly, that's not the issue. One of our civil liberties as United States citizens is the freedom of religion. If you believe your religion doesn't support homosexuality that's OK.

What isn't OK is thinking that your religious beliefs should dictate others lives.

What isn't OK is using your religion or your beliefs to take away rights from those who chose to live their life differently than you.

Some members of my church are still convinced that their marriage now means less because people are free to marry whoever they want to. Honestly, I wish I was kidding. Tell me again, Brenda how exactly do Steve and Jason's marriage affect yours and Tom's?

It doesn't. Really, it doesn't affect you at all.

Unless Tom suddenly starts having an affair with Steve their marriage has zero effect on you. You never know Brenda, you and Jason might become best friends by the end of the divorce. (And in that case, Brenda and Tom both need to go to church considering the bible also teaches against adultery and divorce.)

I'll say it one more time for the people in the back: same-sex marriage does not affect you even if you or your religion does not support it. If you don't agree with same-sex marriage then do not marry someone of the same sex. Really, it's a simple concept.

As a proud young Catholic woman, I wholeheartedly support the LGBTQ community with my entire being.

Disclaimer - This article in no way is meant to be an insult to the Bible or religion or the LGBTQ community.