American Gods: A Book, A Show, A Poem

American Gods: A Book, A Show, A Poem 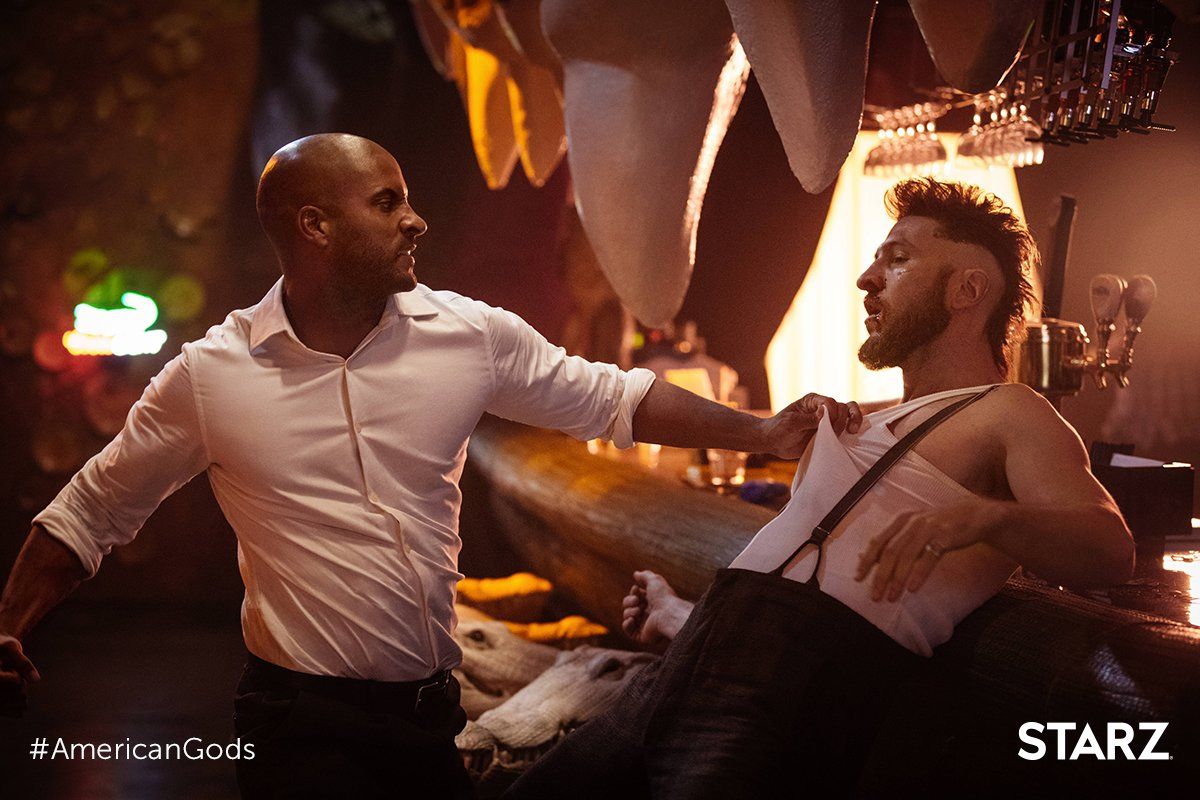 Asking a book lover like me to choose my favorite book is always a bit painful, but for years I’ve had a pat answer prepared: my two favorite books are Autobiography of Red by Anne Carson, and American Gods by Neil Gaiman. However prepared the answer, it’s an honest one. I love both books deeply, and if I had to describe my aesthetic tastes, they work well as two poles on the spectrum of my consumption.

As it turns out, the answer is this: make a very unusual show.

I succumbed to Starz’s demand for money so I could access the first episode, which is, alas, all that is out yet. I propped myself on my bed in the dark, headphones in, and watched.

I won’t spoil what happens, because you should absolutely go and watch it, but a brief summary of the show is this: Shadow Moon gets out of jail and is promptly swept up (why, he’s not sure) in a war between the gods of the Old World (think Norse, Greek, Irish, etc.) and the gods of the New World (technology, money—all that good stuff). But this is no Percy Jackson or Clash of the Titans. While there’s plenty of punching and stabbing, the show’s real weight rests in the deep weirdness of the world Shadow has found himself in. It looks enough like the regular world, but slanted, twisted. Things that don’t make sense start happening more and more, and neither the viewer nor Shadow can always tell what’s real or what’s not. There’s a brief moment at the beginning where Shadow is in bed, and the ceiling above him opens to reveal his wife, hovering in her own bed. They say good night, and Shadow closes his eyes. Was it a dream? A premonition? Just Shadow thinking about seeing his wife again? It’s hard to tell, and that’s par for the course for the show.

There are some people who might be thinking that I’m doing a poor job explaining why I like the show by saying it’s confusing. Touche, but also, if you don’t like things that are confusing, this might not be for you. The links between scenes are sketched in; the plot is something stumbled into. Watching it, I felt like I was dreaming. This is a show to be swept up by, not to be tracked or followed.

This is not to say it’s a perfect show. Like many a first episode, it’s quite weak for the first ten or so minutes. There’s a prologue that simply doesn’t need to happen, and the first time you hear Shadow speak it’s practically a monologue, from a fairly stilted play at that. If you’re not sure that the show is for you, I understand. Just watch the whole first episode before deciding, because it takes a while to find its feet. It’s like nothing quite so much as a poem. You might start feeling put off by the unusual aspects, until something clicks, and those aspects are exactly what draw you in, what make you feel the emotions offered.

Much of the show’s magic is due to its distinctive visual style. The color palettes and lighting are controlled masterpieces. Fans of Hannibal may recognize Bryan Fuller’s hand in this, as he worked on both shows. The soundtrack is unexpected but fitting, lending both humor and pathos to long landscape shots and fistfights both. The casting is also well-done, though the first episode’s dialogue was often a bit awkward—with the exception of Mr. Wednesday, played by Ian McShane with an irresistably disheveled charm.

I like TV, but I haven’t seen every show, of course. But I can safely say I’ve never seen a show quite like this. Ultimately, that’s the biggest recommendation I can make. Go see American Gods, because however you feel about it, you won’t be bored.