Advice From People When You Are Single

Advice From People When You Are Single

Here are common words of wisdom I received as a single lady. 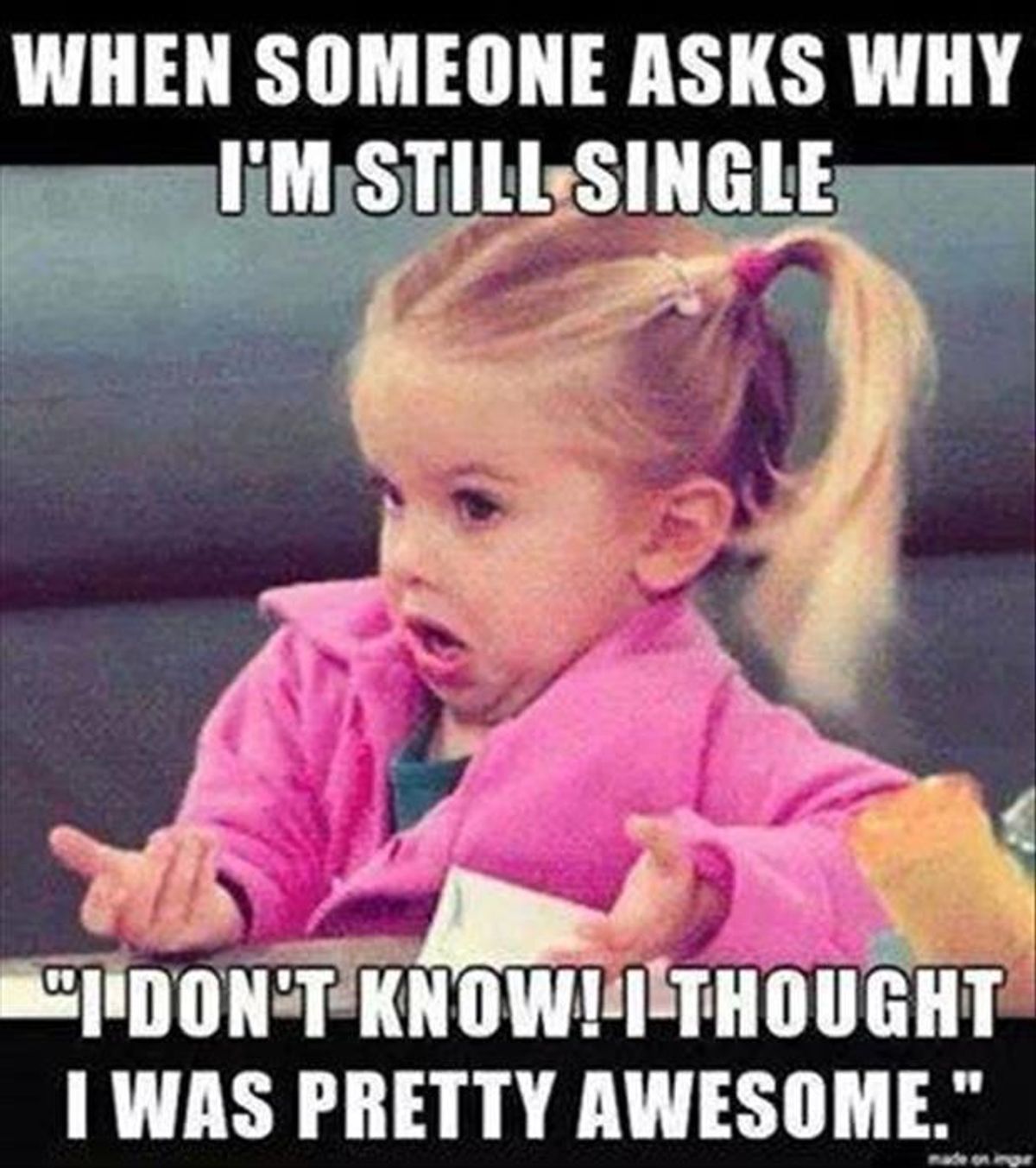 I have been single for years. For longer than my journey through college and high school combined. Because I've been a single lady for almost a decade, it makes me wonder if I am ready to date someone. I talked to or encountered some people who I figure would know what to do.

My mom is already in the process of insisting on me trying to find a guy. She knows that I have potential because I got her beauty from her, not my dad. But she also believes that I can find a guy with a snap of the figures or the flip of a wrist.

She met my father on a blind date that her friend set up. Since she was in her mid-twenties when she met my father, she figured that it would not be that hard for me.

She even threatened me to find someone or else she will start throwing objects at me randomly. I believe she will stop after a year.

I had lunch last month with my friend and somewhat of a mentor. Our conversations typically range from having a career as a filmmaker to the challenges we face as female directors. When our conversation came to our personal life and the difficulties of finding "the one," she stated that we should find a guy who is our best friend because we are already comfortable with them and it is a easier transition from friendship to relationship than from stranger to relationship.

I understand what she is saying; yet, when I think about all my guy friends, they are ether gay or taken. I know single men out in the wilderness, but my connection with them is more of acquaintance and not at that friendship level. However, would it be too late for a guy to make a move if we are in the deadly friend zone? Let's think about that for a second.

While working at my job at the lighting and grip department at my film school one day, my co-worker who dresses like an nineteen-ninety American Dad, cuts his hair like a nine year old child, and acts like an eighty year old from the nineteen fifties questioned me on the difficulty of being beautiful. I asked him how I could be attractive but not be in a relationship. He stated that he already knew about his attractive looks and was single for a few years until he found his recent girlfriend. I do not trust his judgement at times due to his ambiguous identity with managing to look old and young at the same time for some reason. God probably had a great time creating him and my co-worker is probably his greatest invention.

By managing to dress, act, and almost look in a similar fashion without even trying, I feel talking to my RBF twin would help. During one of our movie nights, she stated that it is difficult these days to find a guy. She also stated that many guys only want to have sex with no strings attach. Even if there is a guy out there, that guy is not the guy you like or is younger than you. When I mean younger, I mean you were already going to kindergarten while he was just born. Also there are leftover guys out there that may look good on the outside, but may have a bad temper or have a collection of globes for some reason.

One time, I told my friend that I am giving up on finding someone after years of trying to look good and dress well. Without hesitation, he suggested going on dating apps like Bumble or Tinder. "You'll find someone", he stated as he drank a mixer drink. I followed his advice and tried the apps for a month.

Both apps are filled with guys who only want to have sex and not even want to date. The guys who do want to date are ones who look different from their profile pictures. Congrats on the angels.

It is not just my friends and family members encouraging me to continue looking, the entire society wants me find someone. At my age, I should be able to find someone to go on a date with; yet, there's no one out there.

Most of the men I have worked on sets q or have taken classes with are all taken either by their high school sweethearts or by girls they met a couple of weeks ago.

I even have people ask me why I haven't found anyone to date. I have hairstylists, doctors, and even teachers asking why have I not gone out of my way to find someone. They would usually say, "There are tons of guys out there just waiting for you". I understand what they are saying, but why do I have to find someone now at this moment when I have not finished school or gotten a decent job to support myself.

The fact that society wants people to start dating once they are in their twenties while ignoring the chance in finding the right person makes me wonder if single ladies should even listen to society. If we do find someone to date and be in a relationship with, society is going to pressure couples to get married. Once couples get married, society will question on when they are going to have children. Overall, society will continue to pressure our lives like that until the day we die.

When I told my grandmother about the pressures from society about finding a guy, she gave me some kind and thoughtful words. She told me that I will find someone someday. It may not be today or next week; but it will happen. She then told me that guys at my age are a bit immature and may not know how to be in a relationship. They may perform stupid acts like tell you that they like you at a random moment or give you a certain look that most guys would not do if he is friends with you. She also states that women at my age are more mature and know what to say and when to say it. The idea that we have a decent filtration system compared to guys is pretty cool and something that I lack at. Before she continued her sass life, she stated that when a guy feels that he is ready, he will let me know.

For any girl or guy who is still single - but is still trying - I would say live your life like you are normally living it. Ignore people who pressure you to find someone or to dress a certain way. When a guy comes around and has the same desires as you, go for it. Perform a test run on the relationship and see the results. until then, be the bad ass girl with a loud cackle.