Research in the controversial topic. 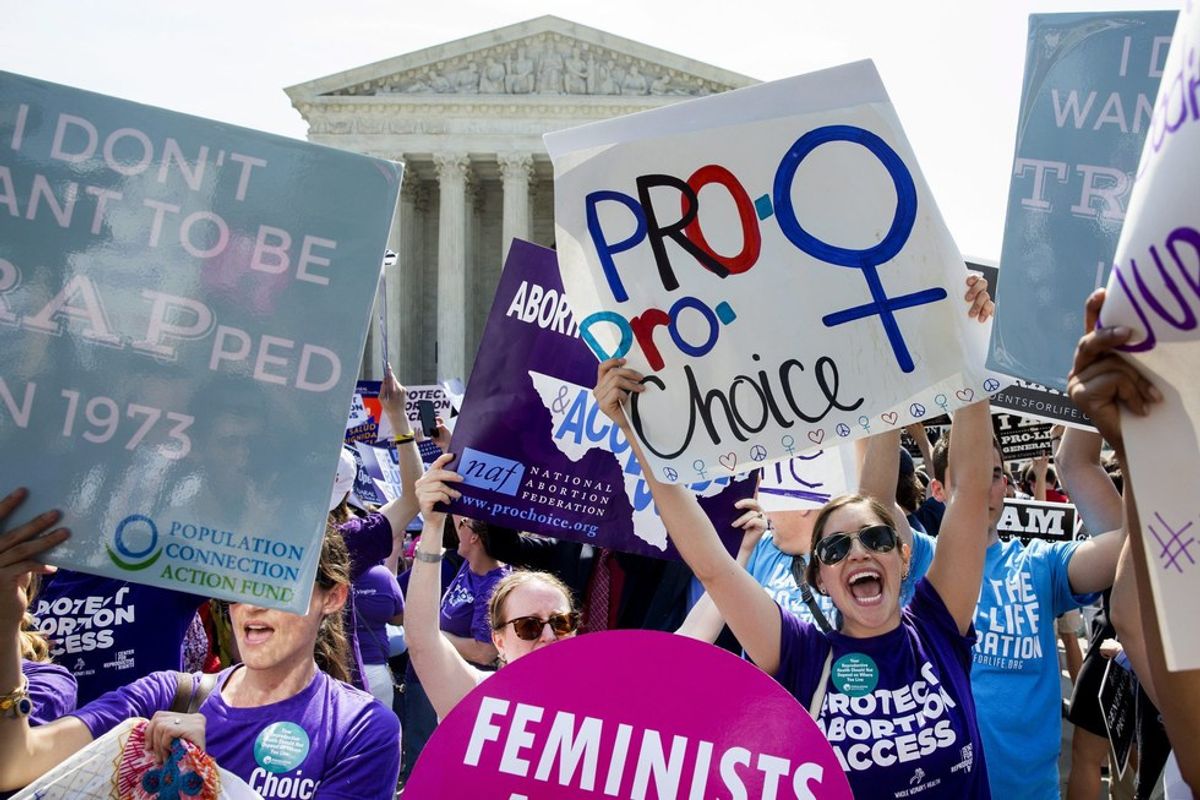 In the United States today, women are often subjected to numerous social stigmas in regards to their bodies. For instance, women are continuously judged on their physical appearance. They are also criticized for how they live their lives. Women are often expected to be inferior to men and to the government. In relation to this, women are subjected to social out casting for deciding to have an abortion, or what they can and cannot do with their own bodies. Although abortion is legal in the United States, many citizens are hesitant to agree with the action. Abortion should not be stigmatized because it is ultimately the woman’s choice because it is her body. Aborting a fetus is not murder, thus should never be considered a crime, and should stay legal in the United States.

The negative stigma that surrounds the act of abortion has haunted many American women in the past few decades. Before abortion was made legal in the United States, women were only allowed to undergo the surgery if the pregnancy was a danger to them or if rape or incest impregnated the woman. In 1973, the landmark United States Supreme Court Case, Roe vs. Wade changed the standard of abortion policies. The case decided that constitutionally, women must have the right to decide what she wants to do with her body. This includes the right to abort her own child (@ppact). In the aftermath of the decision, Americans saw that abortion was legal once and for all. The decision for conservatives was a gruesome act to occur in the United States. Even though abortion laws themselves are a touchy subject to discuss, American citizens are even more hesitant to accept the fact that the government has so much claim over their decisions (Greenhouse). Even today, presidential elect, Donald Trump has had a mix of beliefs in regards to abortion. In the beginning of his campaign, Trump vowed to make abortion illegal in all cases. Later, Trump changed his stance and promised that abortion would be made available to a woman who was in a dangerous pregnancy or was pregnant because of rape or incest (Donald Trump on abortion). Any law passed that limits the act of abortion is detrimental to the future of women’s rights in America. America needs to put forth a heaping amount of effort to ensure that women are protected under the law.

Since abortion became legal, the surgery has become one of the safest procedures in the United States. Because of the immediate change, abortion was not the sixth leading cause of death among pregnant women anymore (@ppact). However, many conservatives are actively fighting for the repelling of the Roe vs. Wade court decision. Conservatives are driven by their moral compass. They believe that everyone has a right to live (even an unborn child). The main topic that is rarely grasped is the important difference between planned and unplanned pregnancies.

In many cases of involuntary abortion (perhaps when a mother cannot carry her child and must have an abortion), the mother feels as though she murdered her own baby (Goodrum). In this case, a mother planned her child, and expected to have a live birth. Due to this, the fetus went from being an idea and a bundle of cells to a baby. Voluntary abortion, however, is not murder. Not only is the pregnancy unwanted, but the pregnancy is also only an idea—the fetus has not a life for itself yet (or a life though about be its parents and family members). Furthermore, infants do not gain a heartbeat until they are thriving in the womb for about eighteen days. After this, the fetus grows inside of its mother’s womb. Outside of the womb, the fetus would not be able to survive until the latter portion of the pregnancy (typically the beginning to middle of the third trimester). Also, seldom realize that there is a clear difference between fertilization and pregnancy. When a sperm and egg meet, a zygote is formed. These conjoined pairs of cells and genes are not what is considered alive. A fertilized egg cannot exist outside of the womb. Furthermore, in unnatural fertilization, an egg and sperm are artificially mended together. However, the mother is not considered pregnant until the zygote is placed inside of her even though the bundle of tissues contains her DNA from the start (Ling).

Even with the surplus of information surrounding abortion, conservative thinkers still firmly believe that the surgery should be abolished. If this were to happen, the rate of abortions would not go down. But, the rate of unsafe abortions would rise sharply. In the United States, unsafe abortion rates would relate closely to the act of unsafe abortions in third world countries. In developing countries, women seldom have any rights to their own bodies, so, if they were to decide to have an abortion, they would have to do so in secret. The secret surgery would not only cost the potential life of an infant but also the life of the mother (Haddad).

In regards to the idea of making abortion illegal, many conservatives fight that an unwanted child could be given up for adoption. However, many fail to realize that adoption rates have been declining since the beginning of the 2000s. many parents are choosing not to adopt children because of 1) their longing for a biological child, 2) the decline of children per couple, and 3) the attractiveness of having a child who is from the same racial background as the adopted parents (Selman). Because of the sharp decline of children being adopted in many countries in the world, making abortion illegal would only contribute to the rise in children in foster care and groups home situations. This is not fair for the child, nor is it fair for the government to pay for at least a child’s first 18 years of living. These costs would outweigh the cost of abortion in a very apparent manner.

The United States today have implemented laws that prohibit abortion after a certain number of weeks in the womb. In many states, the state in which a doctor will not perform a voluntary abortion is in the beginning of the first trimester (around three to four months into the pregnancy). This restriction on abortion is for the safety of the mother, and it also adheres to a viewpoint that is quite morale. Also, many states consider the age of the woman who requests an abortion. In many cases, if the pregnant woman is under the age of 18, the parents either must be present or at least notified. This restriction on abortion takes care of the minors who are pregnant, and allows them to be guided by their parent or guardian before making the decision. Also, perhaps more controversial, many states require that a pregnant woman before the surgery undergo counselling. This ensures that the woman is sane enough to go through an intense procedure (An Overview of Abortion Laws). These restrictions on abortion are not ever restrictions. Each of these rules are put in place so women do not abuse the surgery. The restrictions also ensure that the mother is mentally capable of handling the surgery, and that she will be able to survive it.

In the grand scheme of things, abortion is a woman’s choice. A woman has the choice to raise her child, give him/her up for adoption, or to abort it. This decision cannot be controlled by the pressures of peers and the constant debates in the political world. What a woman does or does not do with her body is up to her and her only.

Disclaimer: This research paper was previously submitted as an English assignment in the fall of 2016.