These stereotypes are less believable than Bigfoot. 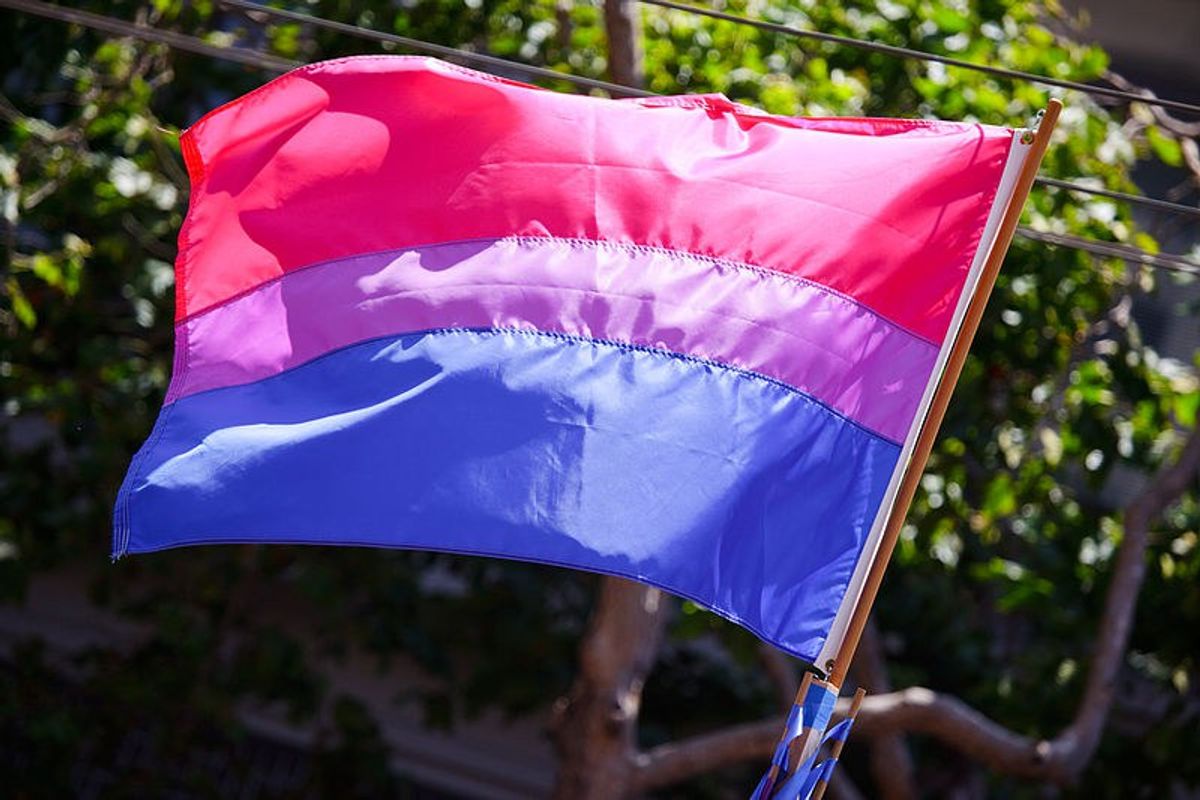 The term "bisexuality" tends to come with a lot of baggage. As more awareness has been drawn to LGBTQ+ communities and activism, bisexuality has been tangled up in a web of misconceptions, making it difficult for bisexual people to find social circles where they feel comfortable. In this article, I would like to address and debunk some of the most common myths about bisexuality that I've come across, in the hopes that I can help other people understand what it actually means to be bisexual.

Naturally I have to start my list by tossing this first myth out the window. This article wouldn't need to be written at all if bisexuality was nothing more than a figment of our imaginations. Believe it or not, bisexuality is as real as the screen you're reading this on. I identify as bisexual. My significant other identifies as bisexual. In case you would like some examples outside of my personal life, The Huffington Post has a list of 30 celebrities who all identify as bisexual, including Angelina Jolie and Amber Heard. We're not unicorns or leprechauns. Some of us may or may not be dragons, but that's beside the point. The truth is we're average people going about our average lives, with feelings and emotions just as valid as anyone else's. It's as simple as that.

2. Bisexuals are just confused about what they want.

I may be confused about a lot of things, but being bisexual certainly isn't one of them. This is a pretty common myth across the LGBTQ+ community, and I tend to find it's used as more of an excuse than anything. Not by the individual who is supposedly "confused," mind you, but by the people accusing them of being confused. Perhaps those people should be questioning their own mindsets before they question someone else's. Most bisexuals are perfectly aware of what they want, and if they're open about their sexuality, then they'll be more than happy to explain it to you. For instance, I could really go for a slice of pizza right about now.

3. Bisexuality is "just a phase" or an "experiment."

I'm sure almost every person in the LGBTQ+ community has heard this one, too, regardless of what your individual sexuality or gender is. While discovering your sexuality or preferred gender may require some "experimenting," ultimately there is nothing arguable about it. There is no hypothesis or data to be gathered here. A person's sexuality is not superficial, not a passing obsession like your scene phase or your "Doctor Who" phase. My relationship of three years and counting is definitely not a phase.

In my experience, I tend to receive this myth in the form of, "Oh, college is the time when everyone experiments!" as if I'll suddenly go back to being straight after I graduate. Bisexuality is often treated as temporary, like it was some silly, one-time decision that will be over and done with soon enough. While it may take a little while to come to terms with one's bisexuality, that does not mean it's insignificant. Bisexuality is as much a part of someone's identity as their eye color or their fingerprints, and it should be taken seriously.

4. Bisexuals are "half straight" and "half gay."

As with most things in life, bisexuality is not an even 50-50 split. It's not two opposite sexualities stuck together with a piece of tape or a few squirts of glue. Bisexuality is its own distinct identity with a plethora of variations. A bisexual person can love two genders equally, but they can also prefer one gender over the other. For example, a woman who identifies as bisexual may be more attracted to other women, but still be open to and enjoy relationships with men; on the flip side, a man who identifies as bisexual may lean more toward relationships with women, but can still be attracted to other men. Being skewed toward one gender does not mean a person suddenly stops being bisexual.

It's important to keep in mind, too, that a person's gender preferences can fluctuate over the course of their lives. People constantly discover new things about themselves and encounter new experiences. Someone who identifies as bisexual and currently prefers men over women may grow to prefer women over men in a few years. Sexuality is a relatively fluid concept, and no matter what sexuality you're born with, no one knows your preferences better than you do.

5. Bisexuality means being attracted to men and women.

While this might be the first definition of bisexuality that pops up in the dictionary, its real meaning is actually a bit broader than this. Gender is not limited to strictly "man" versus "woman," so bisexuality should not be limited this way either. The most general and all-encompassing definition I've come across for bisexuality is being attracted to two or more genders. Usually this narrows down to a person being attracted to both the same gender as their own and one different gender, as explained here in more detail. In truth, bisexuality is just a word like any other, and it can be interpreted in any number of ways.

Now this is one I come across all the time from people who don't take bisexuality seriously or think they understand what it is when they don't. The gossipers at my conservative high school were particularly fond of spreading this one around. There seems to be this stigma that bisexuals simply use an empty label as an excuse to serial date anyone they want. We can't be satisfied with one gender, so why not go steal all the single people of another gender, too? The more the merrier, right?

Well, as it turns out, bisexual people are no greedier than anyone else. We may have a slightly larger dating pool than straight or gay people, but that doesn't mean we're going to jump everyone in sight who seems interested in us. We have relationships and fall in and out of love the same way most people do.

7. Bisexuals want to sleep with everyone.

This ties directly into myth number six. If bisexual people are going on dates left and right, they must want to sleep with anyone who makes eye contact with them. Perhaps that would be true if bisexuality worked the same way as Pokemon battles, but sadly those are two very different things. Bisexuals are no more promiscuous or pious than your best friend or classmate or that one friendly stranger you met in a coffee shop yesterday. Everyone treats sex and intimate relationships differently, regardless of individual sexuality. Bisexuality is not synonymous with insatiable lust.

8. Bisexuals are more likely to be unfaithful partners.

My own relationship is a fitting example of why this myth is false. As I said previously, both my significant other and I are bisexual, and we'll be celebrating our third anniversary in two weeks. Being attracted to more than one gender does not automatically make you a cheater, just as it does not make you a serial dater. Bisexual people are more than capable of having happy, healthy relationships.

9. Bisexuals in straight relationships "don't count" in the LGBTQ+ community.

This might be one of the most prickly myths about bisexuality. Bisexual people tend to be struck with a double-edged sword of ostracism. By consequence of not being straight, we don't exactly fit into the straight population. At the same time, it's not uncommon for bisexuals to be on the outskirts of the LGBTQ+ population, particularly when they're involved in a straight relationship. It's as if dating someone of the "opposite" gender somehow negates a person's bisexuality, and they no longer belong among other LGBTQ+ people. Perhaps the stigma here ties into the fact that bisexual people have an easier time "passing" as straight people, but what needs to be emphasized is that our sexuality does not change based on who we're romantically involved with. Dating a man would not make me straight, just as dating a woman does not make me gay. I am bisexual. That's it.

There are plenty of other myths I could add to this list, but for the sake of keeping this article under a mile long, I'm going to cut myself off here. The most important takeaway from this is that bisexuals are just as "normal" as everyone else. People are people, regardless of how they identify. Many communities have mountains of stigma piled against them that simply aren't true. Take a little time to really think about someone else's point of view; you may be surprised at how different the world looks that way.