8 Tips For The Women Who Choose VMI
Odyssey
CurrentlySwoonLifestyleHealth & WellnessStudent LifeContent InspirationEntertainmentPolitics and ActivismSportsAdulting
About usAdvertiseTermsPrivacyDMCAContact us
® 2023 ODYSSEY
Welcome back
Sign in to comment to your favorite stories, participate in your community and interact with your friends
or
LOG IN WITH FACEBOOK
No account? Create one
Start writing a post
Student Life

8 Tips For The Women Who Choose VMI 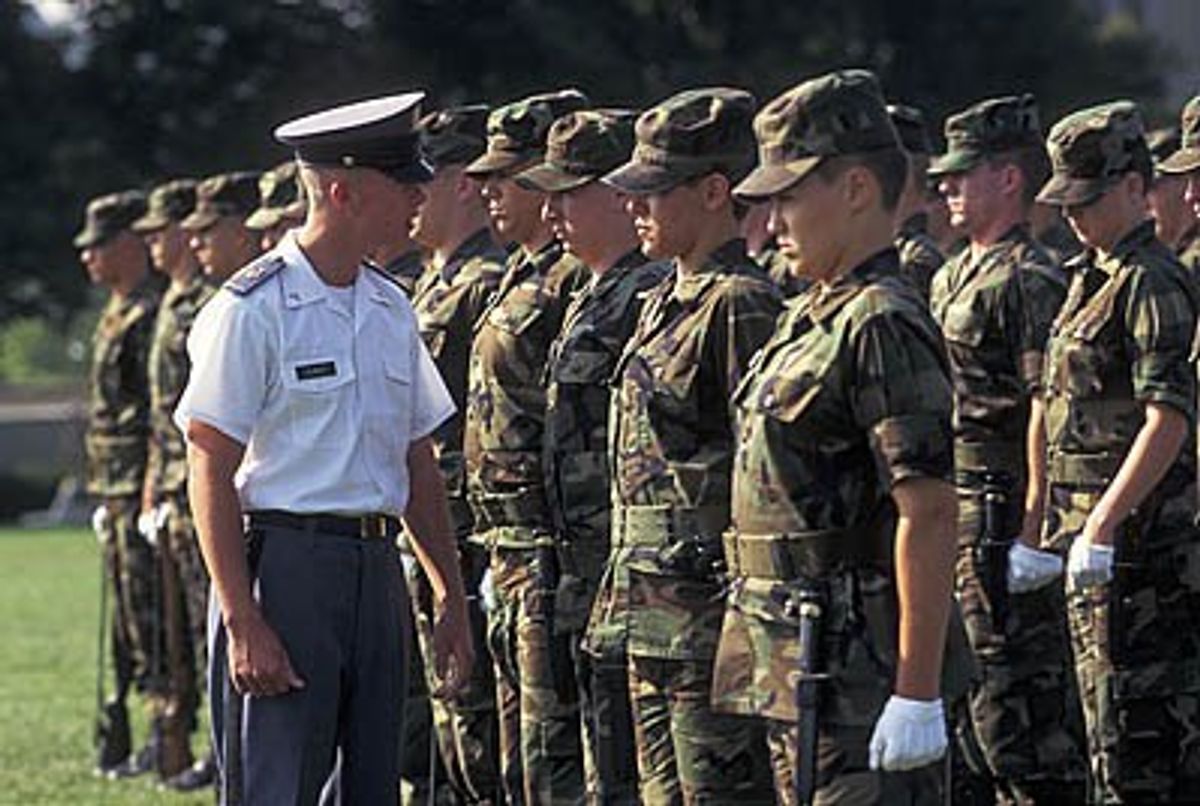 As a female entering into an almost entirely male environment, the pace of everything is going to be more difficult than what you’re accustomed to. The runs will be fast, they will make you get on your face and do as many pushups as the male next to you, and you will be put in front of the pull-up bar every day and be expected to get your chin over it. Prepare yourself for the physical tasks required as best you can, and mentally prepare yourself for failure. You will fail multiple times, and you will be mocked for it. Take it as motivation to do better and train harder, and drive on.

2. Carry Your Own Weight

During exercises where team effort is essential, your male counterparts will sometimes be asked to carry your weight (your assault pack, a 50lb water canteen, a log, etc.) in order to make it easier for you to simply keep up. Carry your own weight. It doesn’t matter how tired you are, refusing to give up will make you stronger. You will feel like you’re about to pass out. You will throw up. There will be tears as you struggle. Keep doing it. The more often you are able to prove that you are willing to carry your own weight, the more respect you will earn from your brother rats, and the more you will find that you are actually capable. You will discover that when your body says that you are done and you can go no further, your mind will be able to ignore the pain and press on.

3. You’re Supposed To Be Ugly

Everybody is unattractive in the Ratline. You are intentionally reduced to your lowest state. Everything is taken from you. You will have nothing that makes you different from anybody else. Your hair is cut, you’re not allowed to wear makeup; even to cover up a bad breakout (which will happen with all the stress and sweat), and you’re forced to walk through barracks at an exaggerated form of attention, which just looks ridiculous and ugly. Believe it or not, it’s actually a bonding experience, and you’ll be forced to become comfortable in public without a little bit of makeup on. If you’re overly concerned about your short hair and not having your makeup for six months, perhaps you should consider another school.

When you cram a mere 1600 people into small living spaces such as barracks with nothing to do besides school and military duties, people will do anything to entertain themselves. This often means talking about what other people are up to. The smallest actions are taken note of, and everyone hears about everything. Secrets do not exist at VMI. Everybody knows who almost everybody is; especially if they have a strong reputation attached. Whether that reputation is good or bad is completely up to you. Do you flirt a lot within the corps? Do you rat people out? Do you avoid taking responsibility for your mistakes? I will make this as simple as possible: Don’t do anything stupid. Do not get romantically involved with anybody until you are finished with your freshman year. Do not try to get out of mandatory ratline events. Help your brother rats out. Sacrifice yourself and your time to save them from the wrath of your Cadre. Be a part of the suffering and embrace it.

If you decide to date after your freshman year, be professional. Do not flirt in public. Do not do anything intimate on post. While dating is permitted within the corps, there are many who do not believe it should be allowed. Conduct your dating relationship in a way that will have a positive impact on dating within the corps. Do not let your dating relationship get you into trouble. Being unprofessional is the quickest way to have much bigger problems with much bigger people.

6. Don't Listen To The Negativity

Most everybody at VMI is perfectly fine with females being a part of the corps. However, there is a very small (but very loud) minority who do not. They will say things and you will hear things that make you feel unwelcome, low, and unfeminine; no matter how well you perform your duties or how well you can keep up. They will complain about your physical fitness, your faults, and the way you look in your uniform. Ignore it. You came to a military school to set yourself apart from other women. You chose to wear a uniform that does not accentuate all your curves or show some skin. You chose to wear your hair up instead of down in curls. Keep in mind that you chose this life. Nobody is making you stay. Whatever motivated you to come to VMI in the first place, remember what it was. Also, remember that you are not here to please everyone.

7. Don't Settle For Less Than Your Full Potential

Here’s one thing that I learned early on that allowed me to keep up, earn respect, and continue to better myself: don’t settle for the minimum standards. Don’t tell yourself that all you need to do is meet the minimum requirements on the female physical training scale. Exercise every day, focusing on areas that need the most improvement, and aim to max the female scale. Once you do that, don’t settle for that either. Move up onto the men’s scale. The more you motivate yourself to do better, the easier physical training will become and the more confident you will be in your ability to perform physical tasks without failure. As your brother rats see the effort you put into your physical fitness and your desire to not let them down, the more trust and confidence they’ll put into you. Now, nobody is good at everything. There will always be an area or two that you will always struggle with, and that’s okay. That’s why most things are a team effort at VMI; some people are better at some things than others. Simply maintain your physical fitness (especially after the ratline when nobody is forcing you to train), and work hard to improve your weaknesses.

8. Enjoy Your Time At VMI

Being at VMI is a love/hate relationship. While you’re at VMI, you’ll be wishing more than anything to be away from it, and when you’re away, you’ll be wishing you were with your brother rats. The fact of the matter is, once your cadetship is over and done with, real life starts, and although VMI prepares you better than most for hard work and sacrifice, you’ll be wishing that you didn’t rush through everything. It’s a once in a lifetime experience, and it’s anything but ordinary. Build strong friendships, enjoy the challenges VMI throws at you, and take pride in being a VMI Cadet.