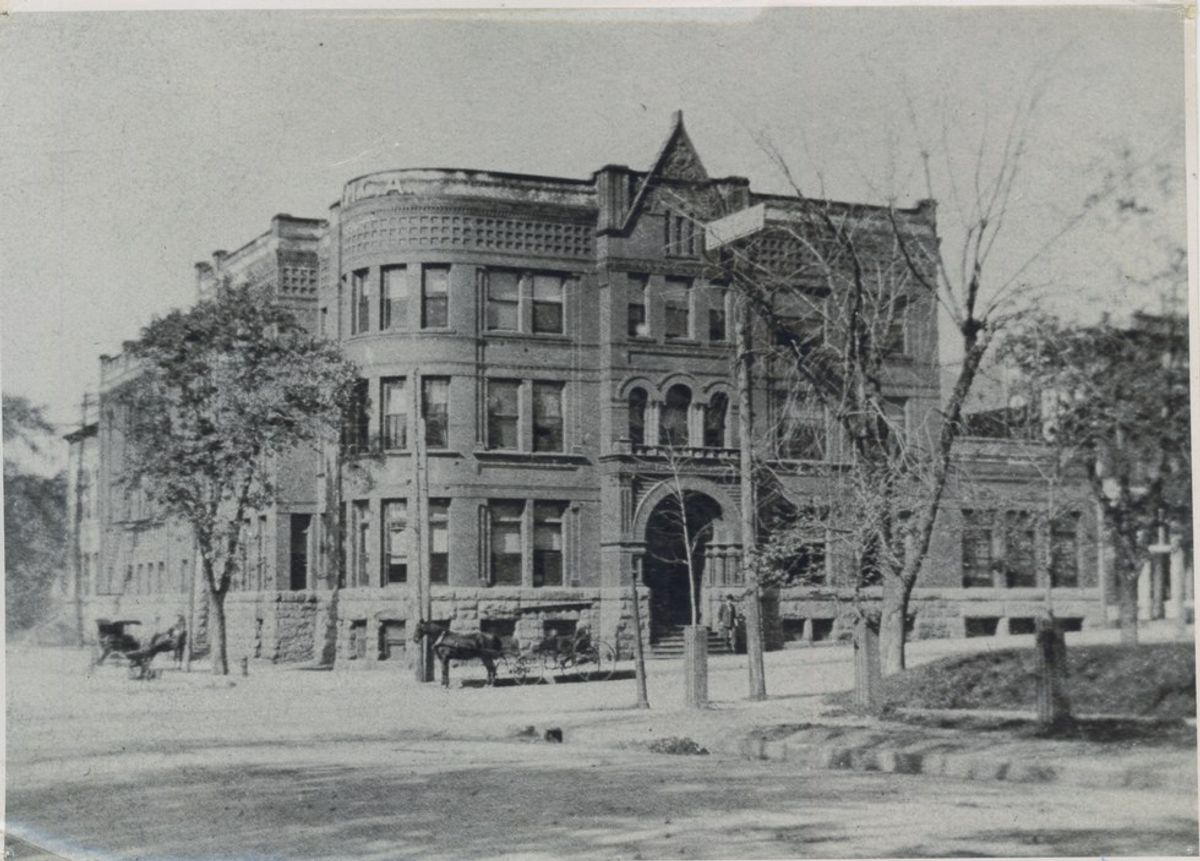 It is almost that time of the year, and whether true or not, I sure love a good ghost story.

Although, by no means am I a qualified paranormal investigator, I have compiled stories and locations said to be true of Sioux City, Iowa.

Lets go to the first location:

Anyone who goes/has gone to Briar Cliff can tell you about the ghost stories heard about on campus, and although not verified, many are convinced some are true. I have had my own fair share of scares in the old North Hall building, which is now set up with studios for the infamous artists (including myself). Many people have graduated without knowing the purpose of the building. However, I spent countless nights there working on artwork, and have heard many strange noises including the voices of a young woman, multiple men, pushing of chairs and tables, and doors closing. All of this happened when the door was locked from the outside. Although, I must admit I never saw anything that qualifies as paranormal.

There are many stories about a nun who hanged herself, and this story always changes. Some say she in the bathroom of 1st floor Alverno Hall, which is the logical explanation for it being the only bathroom with the bathtub walled up (they say she hanged herself from the bathtub rail), and others say she did in Heelan Hall. Although this is not true, there have been 2 confirmed deaths by accidents in Heelan Hall.

I spoke to security and he has witnessed shadowy figures walking through walls, voices, and doors being closed in front of him.

This facility is now owned by Woodbury County, and it "houses jail work-release participants and kitchen facilities used to prepare meals for the main jail in downtown Sioux City. Years ago, it served as the county's institutional home. Sheriff deputies use the imposing brick building for training and some offices, but say the facility is now host to strange occurrences."

Sheriff's deputies and visitors have described seeing figures looking at them from the 3rd floor windows, and the elevator responds to the third floor without being summoned. This all adds to the creepiness of the building, and the stories the visitors tell.

Truth or not, would you take that elevator?

For more than 50 years, this auditorium has hosted events ranging from graduations, to concerts, and many famous speeches including those by Richard Nixon and John F. Kennedy. Even Elvis Presley performed on that same stage. During the early 2000's, the auditorium's use became to decline, so the building was turned into the recreation center it is today.

However, not everything was happy. At least 2 deaths have been recorded here. During the constructing of the building, an electrician named Rodriguez was killed on his birthday, when he was accidentally electrocuted. His body was found when his wife stopped by to bring him a suit for their dinner since it was his birthday. 20 years later, a 12-year old boy was also killed when he fell off the building's roof while hunting for pigeons with his friend. His friend, assuming that the boy had gone home when he did not find him, also headed home. 2 weeks later, the body of the boy was found at the bottom of a roof exhaust shaft, which was a fall of 150-feet.

Today, it is said that the spirits of those two are among those that haunt the auditorium today. Employees and visitors have reported phantom footsteps, particularly during the evening hours, others have reported the ghost of the boy sitting in one of the seats of the upper level of the auditorium, viewing the performances below, some have reported hearing the boy weep. There are also reports of "Rodriguez" turning the lights on and off.

Calvary Cemetery is said to be haunted, visitors claim the same story. Some have described a loud ringing in their ears as they enter the cemetery, and are greeted by what feels like spider-webs or fingertips drifting across their faces. Those sensations only grow as they approach a grave site where there is a headstone carved into a tree, which rumor has it, was used as a hanging tree. Some say that the ropes are still on the tree.

It is said that a student here committed suicide by hanging herself from the heating pipes in her dorm room in Dimmit Hall. Some call it the "hidden hall" since there is no exit from that hall, as one has to go up a level or down a level, meaning that her spirit is trapped on that floor. Those who have lived in her room, have reported hearing crying and the voice of a girl, followed by choking or gagging noises as they are studying. There have also been reports of seeing the ghost of a crying girl walk through the door to that room.

In 1938, a monument was built near the grave of Rosalie Menard Leonais. She was called the “first bride” because she was believed to be the first bride of a non-Native American in the area. She died in 1865, at only 27 years old, shortly after the birth of their son William.

To see the site, one must walk up a long path to the crest of the hill which towers above interstate 29. It is dangerous and not recommended. The story here is that the bride can be seen pacing back and forth from her stone, along the edge of the ridge. There are many stories about what happens when you visit. The main one is that of a young boy who was killed when the stone fell over and crushed him. After that incident, a fence was built around the stone. Some say that if you try to enter the fence, a force will throw you off the stone, and will try to push you over the edge of the ridge. There are stories of visitors who have heard footsteps, have seen orbs, and felt cold spots as they came near the site.

Just 19 miles away in Westerfield, Iowa, is the Girls Scout campsite, Joy Hollow. a former scout said, "I was always on edge and scared and after dark I didn’t want to go anywhere but home." It is said that a girl died in those woods and her body was never found. Visitors believe that her spirit haunts those woods. Some girls tested this by making dolls and putting them in a bed in one of the cabins while they went to supper. When the girls returned, the dolls had mysteriously been moved to another bed, and no one had been in that room. Rumor has it that objects will float, an apparition with blood on its face can be seen, and that some girls have come out of the shower with handprints on them.

Here are only a few of the many stories that are out there. Do you or your friends have any of your/their own?

If you want to go investigate these places, remember to ask for permission, because some of these places require that you do so.

Disclaimer: these stories are not verified or unverified. Many of these are stories that have circulated for years and many have changed over time. Whether you want to believe them or not, it is up to you.