5 Things Cubans Don't Want To Hear About Fidel Castro's Death
Odyssey
CurrentlySwoonLifestyleHealth & WellnessStudent LifeContent InspirationEntertainmentPolitics and ActivismSportsAdulting
About usAdvertiseTermsPrivacyDMCAContact us
® 2023 ODYSSEY
Welcome back
Sign in to comment to your favorite stories, participate in your community and interact with your friends
or
LOG IN WITH FACEBOOK
No account? Create one
Start writing a post
Politics and Activism

Yes, we are allowed to celebrate, and yes, we know best. 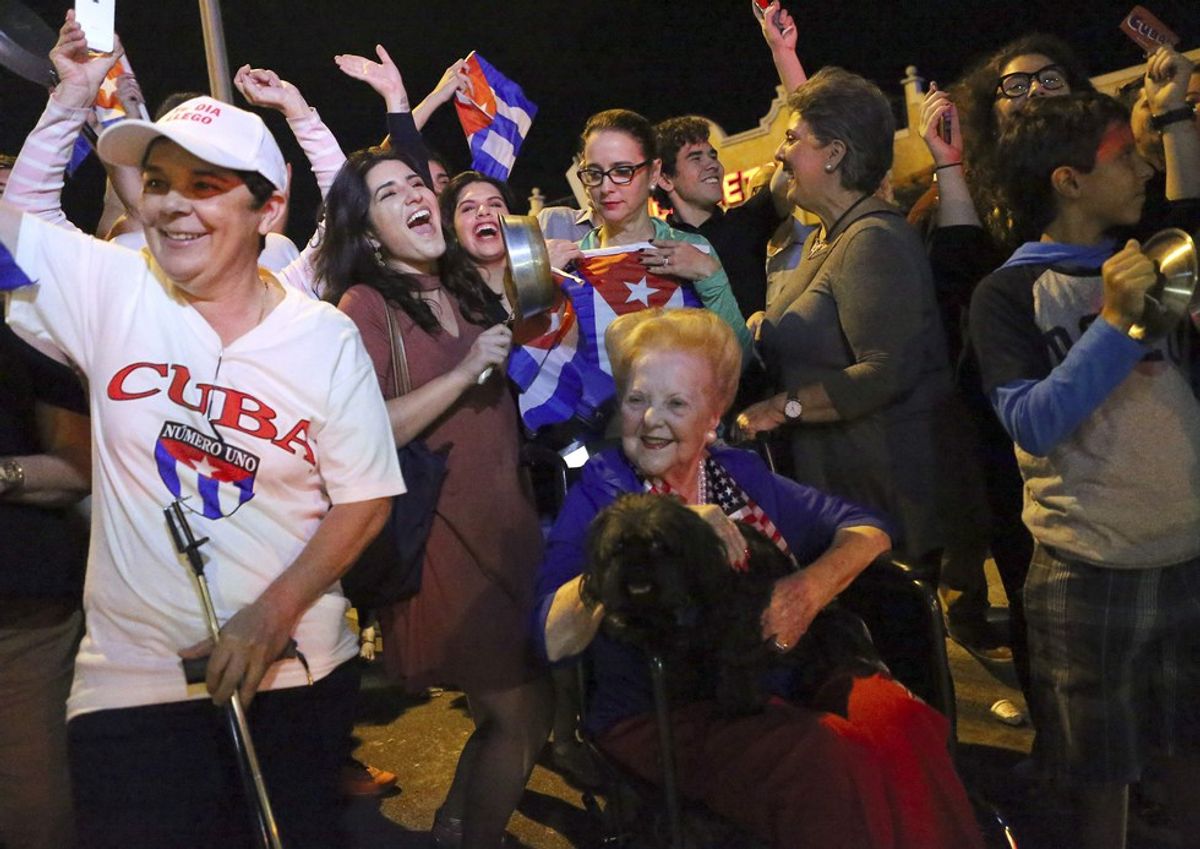 Fidel Castro, the dictator who ruled over Cuba with an iron fist for nearly fifty years, has finally died and joined the other monsters of history.

When the news broke, Cubans around the United States flooded to the streets to celebrate together, banging their pots and pans and proudly waving their Cuban flags, especially in places like Miami that became homes for those fleeing Castro.

Since then, however, many people have taken to the Internet to make it clear that they don't agree with Cubans celebrating, or with their thoughts on Castro. Quite frankly, however, the only people who can really speak about Castro and the person he was are Cubans living under him or who fled him, not those watching from the outside, citing propaganda as the reason for Cubans hating him rather than, you know, starving and suffering in the streets because of his policies.

With that in mind, here's everything Cubans and Cuban-Americans really wish you would stop saying about Castro and his death.

1. "He was a symbol of the revolution in the fight against imperialism."

It doesn't take a lot of reading of my work to figure out I swing liberal, but if I read one more essay from a liberal person living in America, a large perpetrator of imperialism, arguing that we should mourn Castro and his struggle for true justice I am going to vomit. The only thing Castro was interested in was grabbing power for himself, point blank. He executed his enemies, eliminated free speech and free movement in and out of the country, forced people to live on strict rations while he lived like a king, and the people of Cuba are in a forced mourning period right now. He revolutionized Cuba in the worst of ways. Cubans are not sacrificial ornaments in the fight against imperialism; their deaths aren't "justified" by a goal he never accomplished. They didn't want to be a part of that fight. They didn't want to be starved out and shunned into silence.

2. "People only left Cuba because he brought racial equality and they were racists."

No, I am not at all joking. This is a comment I have had to see more than once with my own eyes. I am the first person to admit that a lot of Cubans, like a good chunk of Latin America, hold anti-black racism in their hearts, but if you honestly think thousands died on rafts in the ocean after packing everything they owned into one tiny suitcase, trying to escape to America, just because they were racist, you are absolutely ridiculous and insulting. People risked their lives and left everything behind, including their families, to leave Cuba. Do not ever trivialize that.

3. "Seriously, he wasn't that bad! He was friends with people like Nelson Mandela and Malcom X!"

Is this argument really that since he was friends with people you admire, than he should get off scot-free? It simply doesn't justify the executing of political enemies, jailing enemies in concentration camps without fair trial, and ruling for fifty years without elections.

There is no such thing as a good dictator. Ruling by force is never justice.

4. "He overthrew Batista, a repressive government!"

And replaced it with his own dictatorship! Maybe the revolution had good intentions, but that does not mean anything when you run a country into the ground for your own gain. He violated the human rights of the Cuban people in about a billion ways and that is not erased by anything he did.

There's no need to finish that sentence. If you or your family did not live under Fidel Castro, there is no reason for you to speak on his death.