4 Reasons Why Trump and Voldemort are the Same Person
Odyssey

4 Reasons Why Trump and Voldemort are the Same Person

"There is no good or evil, only power and those too weak to seek it." -Donald Trump or Voldemort? (But is there really a difference?) 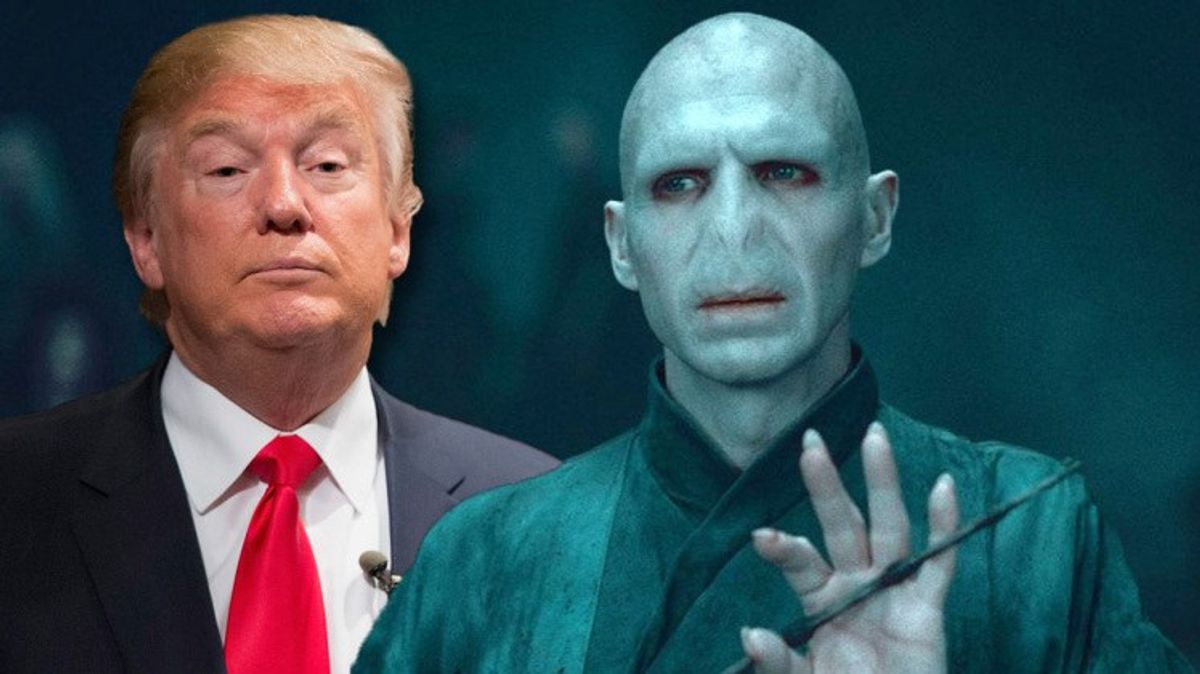 I was prompted to write this article while reading CNN when I saw that J.K Rowling had called Donald Trump worse than Lord Voldemort. You can check out that article here.

Although, I am sure in some aspects a person could argue that either is worse than the other. In the meantime, here are 4 Reasons that Donald Trump and Voldemort are the same person.

Voldemort: At Hogwarts, he was the Prefect and the Head Boy. He managed to charm every single professor other than Albus Dumbledore. He knew how powerful and magical he was and he showed this by killing Tom Riddle Senior, making horcruxes and accumulating thousands of followers.

Trump: Although he started off with a "small loan", he is a successful businessman, investor, author, television personality and candidate for President of the United States in the 2016 presidential election. He currently is leading the Republican Polls according to a new CNN/ORC Poll.

Voldemort: His mere name inspired terror. He had an extreme passion for killing and purifying the world of non-magical born wizards and witches. (Side note: that puts him in the same category as those who led genocides such as Adolf Hitler.)

Trump: Do I even need to say anything? The documentary by Anthony Baxter: "You've Been Trumped" outlines how he used his money and power to destroy a fragile ecological zone on the Scottish coast to make a golf course and make the lives of local residents miserable. He takes no prisoners when it is time to get a job done.

Voldemort: In Harry Potter and the Half-Blood Prince, Harry is shown memories of Voldemort as a child. Even as a child, he was manipulating animals and "make bad things happen to people who annoy him. Another way he manipulates others is by planting illusions into their minds making them believe whatever he wants them to. Lastly, he used his diary to feign comfort to Ginny Weasley and manipulate her to open the Chamber of Secrets.

Trump: He manipulates literally everything, especially the media. Mere hours after getting bad polling results, he called to ban Muslims from entering the US as an obvious strategy to manipulate the media into giving him more coverage. He was called into four television networks after his statement.

Voldemort: 'Lord Voldemort' is self-inferred as he is not actually a lord. Not to mention, he ripped his soul into several pieces so he could live forever, tried to kill Harry Potter so he could live, etc. Need I say anymore?

Trump: Through every press conference, debate, and tweet he seems to be the opposite of humble. And this surprises who exactly...no one. He rarely, if ever, admits mistakes or expresses guilt, shame, or embarrassment for things he has sad or done. He once told a New York Times columnist, "I am a man of great achievement...I always win...It's what I do. I beat people. I win."

Regardless of your political opinion or your love for an evil villain, these are facts that you cannot deny. Check out some of these photos of Trump and Voldemort morphed together and looking similar further proving my point that they are the same person.

If you think any other political candidates are similar to a villain, email me them at mshowers@iastate.edu