3 Things Journalists Should Be Terrified Of Under Trump's Presidency
Odyssey

3 Things Journalists Should Be Terrified Of Under Trump's Presidency

Not only do they need to protect their own rights as journalists, but they are needed to help protect the rights of citizens nationwide. 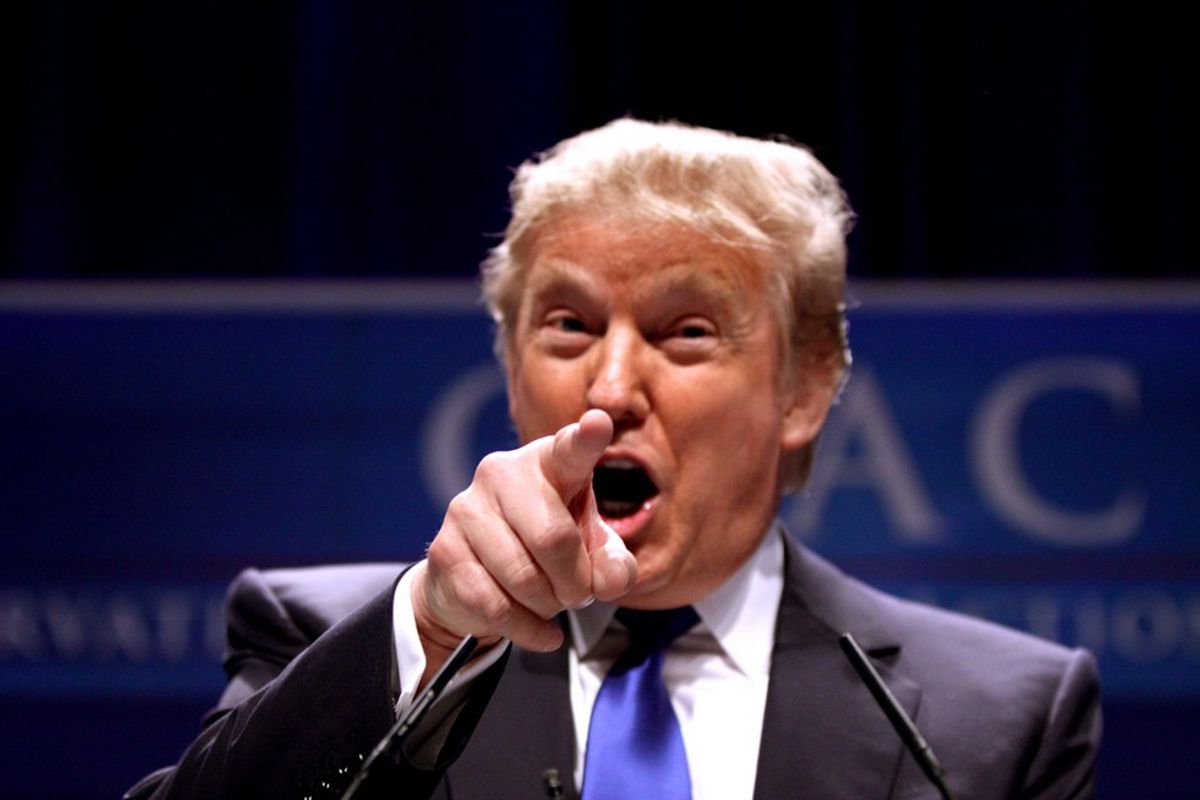 President-elect Donald Trump has made it clear that he is no fan of the media. In fact, he's declared war.

The President-elect's lack of trust in the media has deepened the growing divide between himself and the media leading up to his inauguration in this January. Many members of the media have already faced vast discrimination throughout Trump's 2016 campaign for President, leaving them to gear up for an onslaught of criticism, and potential legal repercussions, from the incoming administration.

With more political power than ever before, Trump's vindictive temperament is more alarming than ever to journalists who's job it is to provide fair and balanced coverage of any and all news content to the public. As he steps into the White House, a trifecta of dilemmas face the current journalism community and their rights as members of the press that are leaving many in the industry on edge.

1. Trump promised voters he would "open up libel laws," potentially putting the press' rights in jeopardy

For months, Trump campaigned on the message that the "dishonest" media would purposefully falsify information about his campaign to undermine his campaign. In retaliation to his negative image in the press, the former real estate mogul promised supporters he would "open up our libel laws" to punish reporters and news organizations who dared to cover him unfavorably. And he doesn't seem to be backing down on that promise anytime soon.

As a public figure, Trump is bound by a Supreme Court decision from 1964 known as New York Times Co. v. Sullivan which requires those in the public eye to prove that false allegations were knowingly and recklessly made. Setting the precedent for what is known as "actual malice" has helped protect media outlets for decades from facing prosecution for releasing false information unknowingly. Gutting this portion of the First Amendment would bring trouble for all journalists in the United States.

While opening up the United States' libel laws is certainly possible, it isn't necessarily the simplest mission to accomplish. As President, Trump can take one of two roads if he is as serious about gutting the country's libel laws as he says he is. The first is via the Supreme Court.

Justice Antonin Scalia's death left the conservative justice's seat on the Supreme Court empty, leaving the door wide open for President Trump to turn the court in his favor. Nominating a stark opponent of New York Times Co. v. Sullivan to the vacant seat on Supreme Court would, in theory, break the current 4-4 split between the conservative and liberal justices. Any cases presented to the court that challenges the 1964 ruling can be potentially overturned based on the current views of the court. If this method proved ineffective, Trump's only alternative would be the development of his own Constitutional amendment, which would be even less likely to pass.

The reversal of New York Times Co. v. Sullivan could, however, potentially decimate the journalism industry. Journalists could face penalties for reporting false allegations of any sort against any one person, whether it be done intentionally or not. Instilling the fear of retribution for reporting anything even slightly inaccurate will likely deter journalists and news organizations alike from reporting anything they can't independently verify, ultimately preventing particular information from being released to the public (something any demagogue would want.)

2. Trump's personal media "blacklist" continues to expand as he enters the White House

Unable to cope with the perpetual scrutiny that comes with being President of the United States, Trump's media "blacklist" has been expanding rapidly to keep pace with the profound criticism he currently faces as President. News organizations such as BuzzFeed, Univision, Washington Post, POLITICO and Huffington Post are now denied press credentials.

Trump has already started denying press credentials to reporters from outlets he deems unfit. POLITICO, for instance, has either been denied press credentials or removed from political events for nearly a year after reporting unfavorable information on Trump and his 2016 campaign for President.

In March, POLITICO reporter Ben Schreckinger was escorted from Trump's Mar-a-Lago club in Florida after attempting to gain access to a speaking event and press conference. Months later, another POLITICO reporter was removed from one of Trump's campaign stops for entering under general admission after being denied press credentials for multiple events.

The Washington Post was one of the most recent additions to Trump's media blacklist after calling their reporting "incredibly inaccurate" in a tweet from mid-June 2016. This came after a story released by the Post claimed Trump seemingly connected President Barack Obama to the mass shooting in an Orlando, FL nightclub, outraging both him and his vast network of supporters. Trump announced the ban via social media before contacting the organization itself, leaving Post employees to find out the hard way.

Trump's flagrant disdain for unfavorable press coverage makes it more than apparent that members press will continue to see reduced access to President Trump upon his inauguration. The question still remains as to whether he will continue to violate the media's Freedom of Press rights or if he will just outright dismantle them. His most recent interaction with CNN reporter Jim Acosta is a prime example of how Trump can potentially neglect the press' Constitutional rights.

3. Trump will promote any positive content on himself - even 'fake news' - while discrediting renowned news organizations

After calling CNN's reporting 'fake news' at his first post-election press conference, it's become abundantly clear that Trump doesn't have a firm grasp as to what "fake news" really is. Whether he knows the difference between real and fake news, however, is another story.

Fake news, which is written to intentionally mislead readers, has grown in popularity in recent months in part from mass election hysterics that engulfed the Internet and social media. The lack of media literacy in this country has been exploited by fake news websites not only as clickbait to gain web traffic but to promote their own political and social agendas. Prominent political figures have been caught sharing fake news stories masked as news from reputable news organizations to further promote their political ideology on a public scale. For the Trump administration, it appears to be a common practice.

Eric Trump shared a news story seemingly produced by ABC News on his respective Twitter accounts claiming people were being paid $3,500 to protest Trump rallies during his 2016 campaign for President. Eric shared the story with the caption, "Finally the truth comes out! #CrookedHilary."

Needless to say this riled up Trump's base, but for all the wrong reasons.

The website abcnews.com.co is a fake news website disguised as ABC News' homepage (the ".co" at the end of the domain being a dead giveaway.) Fake news sites will frequently make slight alterations to a major news organization's title in order to trick readers into engaging with the website by clicking on the story, otherwise known as "clickbait." This not only helps promote specific political ideologies by providing readers with disinformation (intentionally false information) rather than misinformation (typically unintentionally false information) but also pours money into the pockets of the domain's owner. The more clicks the site gets, the more money they make.

Based on his pattern of public behavior, it's hard to determine whether or not Trump is aware of the reality behind fake news or not. While there are numerous people in his administration promoting fake news stories that ultimately support Trump's image, he openly denounces news networks who dare to censure him as fake news, using the phrase as a derogatory term. He seems to be conscious of the term's negative connotation but still appears to condone the promotion his image with the kind of fake news stories he seemingly vilified in his first press conference after the election.

The press has a lot to keep their eye on in the wake of Trump's election and inauguration as the next four years will likely present the media with their biggest challenge in recent history with Trump at the helm. Not only do they need to protect their own rights as journalists, but they are needed to help protect the rights of citizens nationwide during one of the country's most tumultuous periods to date.