13 Photos Of Celebs That Prove 'Lampshading' Is A Legit Trend
Odyssey
CurrentlySwoonLifestyleHealth & WellnessStudent LifeContent InspirationEntertainmentPolitics and ActivismSportsAdulting
About usAdvertiseTermsPrivacyDMCAContact us
® 2023 ODYSSEY
Welcome back
Sign in to comment to your favorite stories, participate in your community and interact with your friends
or
LOG IN WITH FACEBOOK
No account? Create one
Start writing a post
Entertainment

13 Photos Of Celebs That Prove 'Lampshading' Is A Legit Trend

Because wearing pants is so last season. 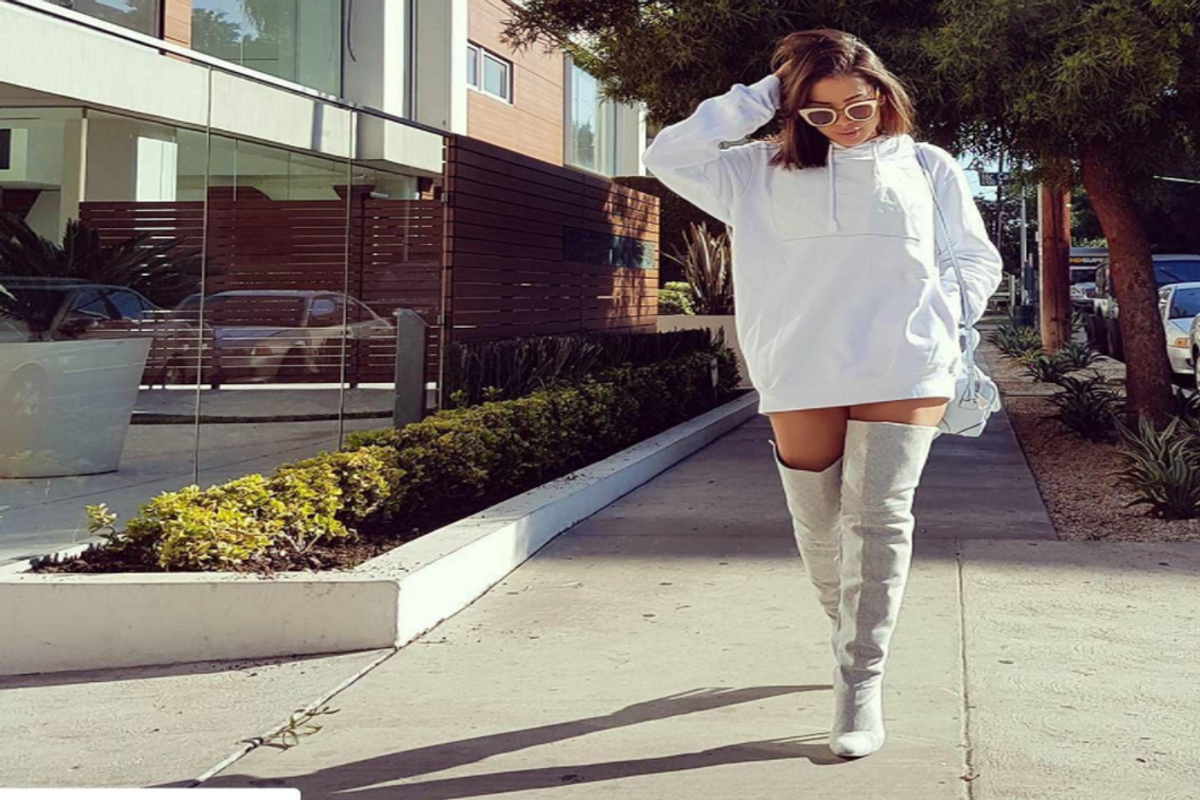 It's a style based out of comfort. A style that allows you to leave the house feeling less constricted, and one that doesn't require spending heaps of money on a well thought out outfit. One that college sorority girls have popularized and made synonymous to their style, though I'm sure that it was happening long before.

Protestors of "lampshading" insist it's a sloppy look. Some go as far as to say those who lampshade look like they just rolled out of bed (which I'm usually guilty of).

However, when it comes to T-shirts and hoodies, I say the bigger the better. XXL please.

Lampshading: Wearing an oversized T-shirt and athletic shorts that are hidden by the shirt. This gives the girl a silhouette similar to that of a lampshade. (Usually worn by college girls, esp. sorority girls).

It's time for the lampshade criticism to end and these 13 photos of celebrities rocking the classic sorority trend is all the proof I need to convince you.

Jenner's Givenchy T-shirt rings in at around $2,000 while a Comfort Colors T-shirt is closer to $20, but it doesn't mean she hasn't taken to the popular trend of lampshading.

We expected nothing less than support from Bad Girl Riri in the endeavor to #makelampshadingcoolagain.

Vanessa Hudgens is famously known for her gypsy-like festival style. It's surprising and refreshing to see her supporting the move towards popularizing the oversized T-shirt look.

Kylie Jenner subtly lifts her shirt to remind the rest of us she remembered to put on shorts- a common fear for the everyday lampshader.

Jaden Smith has been ahead of the trends with his gender-neutral fashion sense long before his first appearance in Vogue, so it's no surprise that he's also behind the movement towards oversized T-shirts and exposed thighs.

The youngest of the Hadid sisters shows solidarity to the movement in a statement T-shirt that essentially provides the message I want to send to all lampshading haters.

It wouldn't be a style statement without including the eldest of the Kardashian clan. Plus, I couldn't help pass up an opportunity to show how she spiced up the classic look with a pair of now sold out Aquazzura Velvet thigh high boots in midnight blue.

Thus confirming Hailey Baldwin's style is the only style I'll be channeling on LSU's campus this fall.

Jourdan Dunn is a highly ranked super model for a reason. If she isn't ahead of the trends, she's creating them herself. Now, she's added the oversized shirt and no-pants look to her seemingly effortless style.

Ariana Grande paired her XL T-shirt with a pair of high-heeled booties and a jacket for a night out. I'll definitely be trying this for a night in Tigerland this fall.

Including Rihanna twice because she can do no wrong. Plus, she's given me a lot of inspiration that involves swapping out my tennis shoes and pairing my thigh highs with my extra large T-shirts.

Technically his pants are visible so he's not really "lampshading" but lately Justin Bieber has taken to wearing long T-shirts that nearly reach his knees. Now, imagine a world where Bieber is pant-less and he's one step closer to bidding a sorority this fall.

QueenRadhi
The State University of New York at Stony Brook
31