11 Things SF Giants Fans Know To Be True
Odyssey
CurrentlySwoonLifestyleHealth & WellnessStudent LifeContent InspirationEntertainmentPolitics and ActivismSportsAdulting
About usAdvertiseTermsPrivacyDMCAContact us
® 2023 ODYSSEY
Welcome back
Sign in to comment to your favorite stories, participate in your community and interact with your friends
or
LOG IN WITH FACEBOOK
No account? Create one
Start writing a post
Sports

Because we're fans of the best team in baseball. 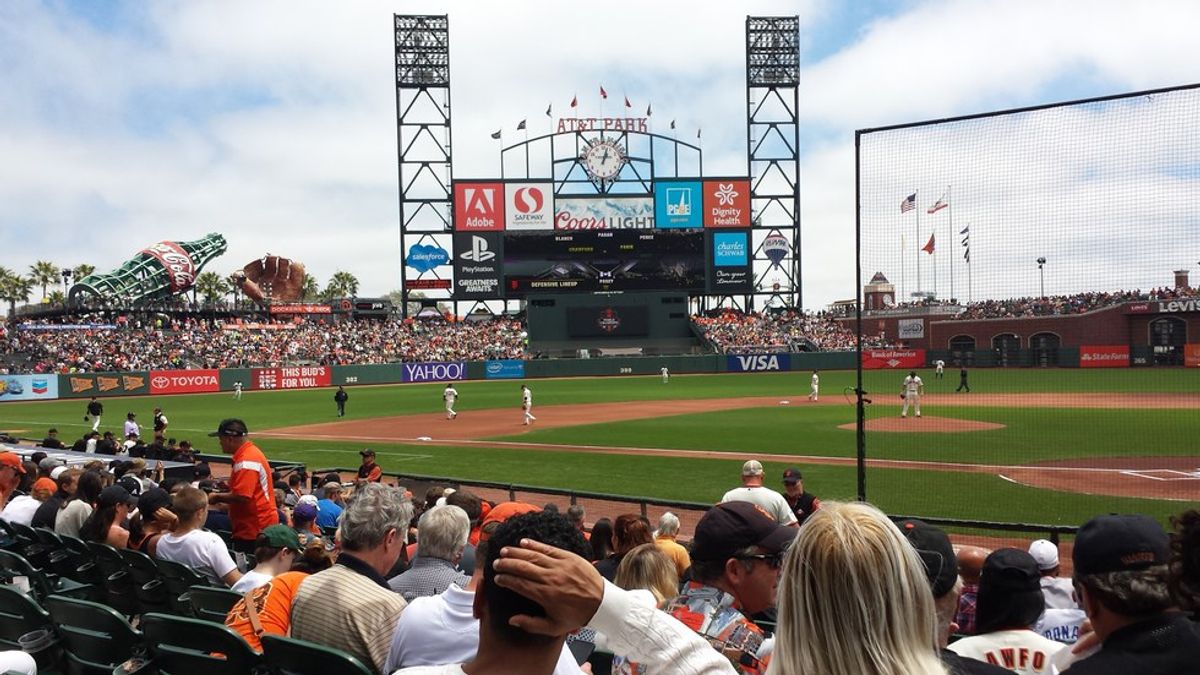 The San Francisco Giants are the best team in baseball, and you can feel free to not comment if you disagree. The first half of the season, they had a 57-33 win-loss record, the highest by far in the National League West. And fans know how awesome their team is: nothing on this list should be a surprise, just a reminder of how lucky we are to love the Giants.

1. Any day with Madison Bumgarner pitching is a good day.

He's reliable, goes deep into the game, and can hit home runs. More than once this season, it took him hitting for the team to rally and pull ahead. The Giants' manager, Bruce Bochy, even let him hit in the Bay Bridge Series, deciding against using a designated hitter when he pitched in Oakland. And in his last game just before the break, he came close to pitching a no hitter.

I swear their people have something against the Giants and always have, because any time they do the broadcasting, they seem to have a definite bias against the orange and black. Or maybe it's just because no one can match up to Kruk and Kuip, the awesome broadcasting team that does the local games on CSN.

Every pitcher wants a Buster hug, even if not every pitcher can be picked up off the ground during one.


4. Our second-string guys are just as good as our main ones.

Half of the Giants' normal players are on the DL right now -- Hunter Pence, Joe Panik, Matt Duffy, etc. -- but that didn't stop them from a dominant record before the All-Star break. It took a little fiddling, but the players that came in to replace them stepped up and kept the Giants on top of the NL west.

5. Brandon Crawford deserved to be an All-Star.

Ask Kruk and Kuip, because they didn't stop talking about it for about a week. They had a pretty good case, too; Crawford received both a Golden Glove and a Silver Slugger award last year, when he was also an All-Star. He's also been a solid member this year, consistently coming through with hits when the Giants have needed it.

Sure, it gets cold at night, but the food rocks, the park itself is gorgeous, and there's a huge bottle of Coca-Cola that has two slides inside it. There's even a bowling alley hidden behind the out-of-town scoreboard in right field.

7. The Dodgers are EVIL.

This isn't just a Northern California-Southern California rivalry, oh no. The Giants-Dodgers rivalry is ancient. Their first game was in 1884, when the New York Gothams played the Brooklyn Atlantics for the first time in an exhibition game. It evolved from there, as both teams changed names, and only strengthened when they moved across the country in 1958.

I'm not sure how he keeps his face so stoic, but when he smiles, you know the Giants have just done something incredible. He's managed the Giants to three (!!!) World Series.

9. Our ballpark food is almost as good as the team.

Did I mention the food already? You can have all kinds of seafood, boba, garlic fries, or a Ghiradelli hot fudge sundae. Plus, the Ghiradelli hot chocolate with whipped cream that doubles the height of the cup is the perfect thing to counter the breeze off the bay.

10. The Giants are awesome humanitarians, too.

Every team has their causes and tries to give back to their community, but the Giants do it better than anyone else, at least according to the Sports Humanitarian of the Year Awards, where they won 'Sports Humanitarian Team of the Year.' Their Junior Giants program not only teaches girls and boys from all backgrounds about baseball, but it also teaches life-skills, health, and violence prevention.

11. Even years are special.

2010 was the first World Series the Giants had won since they moved to California. Then it happened again in 2012, and a third time in 2014. With as well as the Giants are doing in 2016, many are wondering if the three-peat could become four.