Every wonder what having a palm-sized dragon is like? 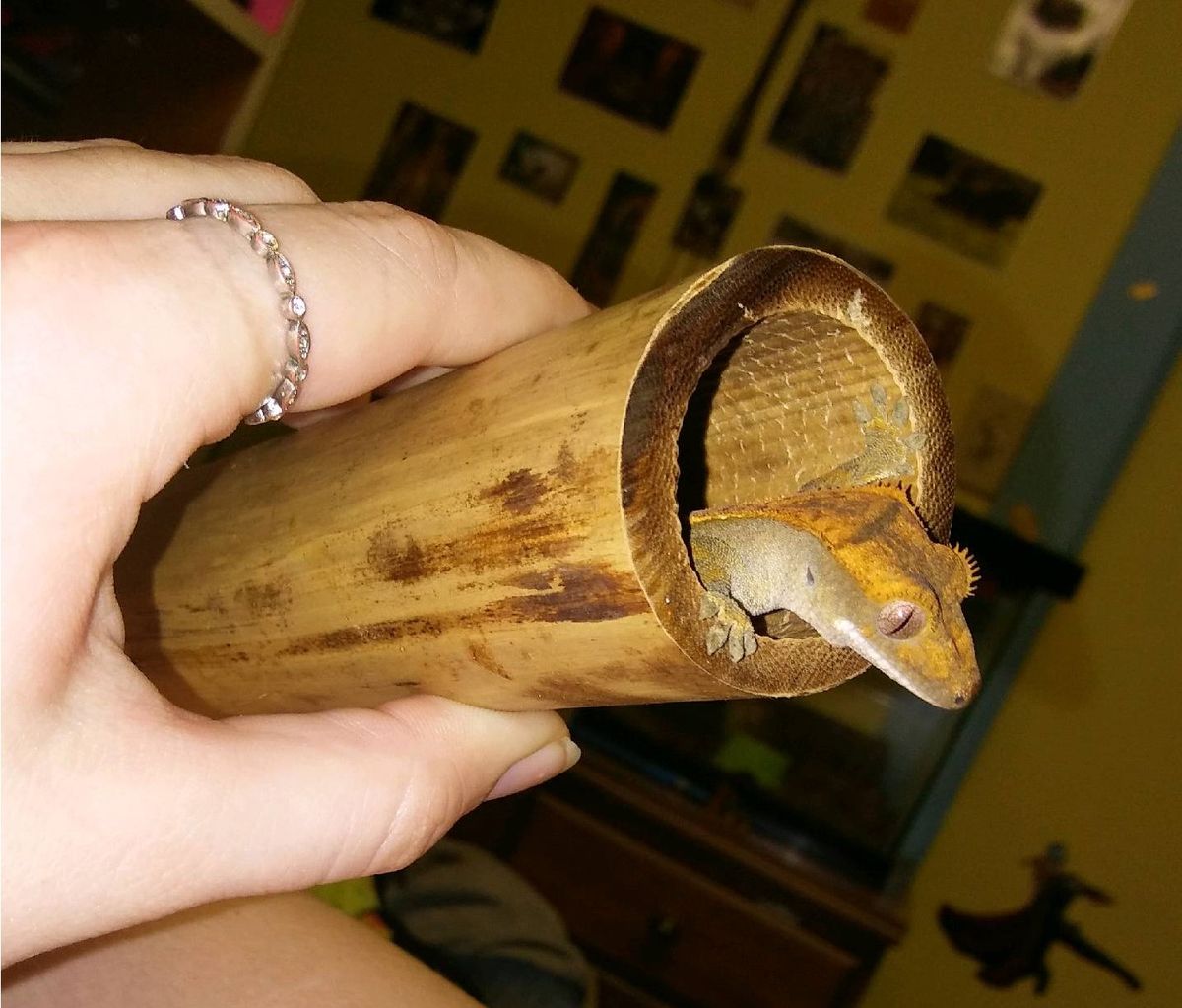 While not as fluffy as a dog or a cat, reptiles can be just as affectionate and loving. It's a wonder that more people aren't interested in them; they are often easy to care for, clean, and extremely interesting. Furthermore, who wouldn't want such a cool conversation starter? The following is my list of reasons why crested geckos are the best pets.

Who wouldn't want a tiny dinosaur that won't grow up to want to eat you? Crested geckos mostly eat rotten fruit and vegetables, so human is definitely not in their diet - although we'll get more into how simple their diet is later.

Their likeness to dinosaurs or dragons can also make naming a fun, interesting experience. For example, you could name your gecko something like "Rex," short for T-Rex. You could also go the route that I did and pick the name of a famous dragon; I chose "Smaug" for my little guy.

2. They have floppy ear flaps.

Okay, so really the ear flaps are actually called crests, hence the name "crested gecko." I previously worked in a pet store and often carried these little guys around. Many people who wanted to pet the geckos that I showed off assumed that the crest was hard or spiky.

When they touched the little guy or gal for the first time - usually across the crest, per my instruction - they would let out a noise of mixed satisfaction and delight. "It's soft!" They would exclaim. I would nod and tell them that they were right; crested geckos are indeed quite velvety.

Want a reptile that will change color, but don't want the difficulty of caring for a chameleon? Crested geckos actually change colors and are cheaper, friendlier, and lower maintenance. When a gecko's color is more vibrant, this is referred to as "fired up." Being "fired down" is when the coloring is duller and more muted. While we don't know exactly why this change occurs, it often happens after a misting of the habitat takes place.

They are well known for their ability to jump long distances, which is really pretty cool! Cresteds are often fearless with when and where they jump and sometimes don't make good judgment calls; I've had several try to jump at my face, only to land somewhere on my chest.

What's interesting is they actually have extra skin under their arms, which helps them to be able to glide. If you look closely at the gif, you can actually see these flaps.

5. They made a badass recovery from near extinction - and still looked cute while doing it.

Crested geckos were actually thought to be extinct until 1994. Since then, they've risen in popularity and are now kept as pets. It still floors me when I think about how these little guys went from being almost completely gone to becoming common, domesticated animals in less than twenty years.

6. They're really easy to feed.

Crested geckos eat a paste-like substance that is supposed to mimic their diet in the wild. They would typically eat a variety of fruit and insects. The supplemental diet comes as a powder and is easy to mix up; it only takes one part water and one part powder. I personally put Smaug's food in a Gatorade bottle cap because they're a better shape and size than the bowls I have for him.

Crickets are also a staple in the crested gecko diet, although they do not need them every day. Typically, I give crickets to my guy once or twice a week, just to get in that protein. Some people like providing mealworms as well, but those are not as healthy as crickets. Furthermore, many juveniles refuse to eat them.

7. They have prehensile tails.

While this photo is both hilarious and adorable, my focus is to the gecko on the far left. More specifically, I'm looking at his tail. If you look closely, it becomes evident that it is wrapped around this person's pinky.

Geckos can do this because they have prehensile tails, which they can use almost like an extra limb. This gives them the ability to hang upside down from branches and catch themselves if they're about to fall. However, I cannot describe a higher feeling of trust than when my crested wraps his tail around my finger while I'm holding him.

8. Crested geckos have better eyelashes than any of the Maybelline models I've ever seen.

9. Crested geckos are honestly the reptile version of dogs.

Crested geckos are tiny, hairless doggos and no one will convince me otherwise. For example, the part of their crest that goes over where their ears should be are almost like dog ears. They also enjoy licking things and sometimes wear a very doggish expression on their adorable little faces. If you need any more proof, here is a picture of a dog that has already accepted his gecko friend is of the same species.

Just look at that little face and those cute, curious eyes!

11. Crested geckos display a multitude of colors and patterns.

The various markings and colorations on geckos - referred to as "morphs" - make each gecko unique and interesting to look at. It can also be a great way to reference and discuss what your gecko looks like. For example, my crested is a harlequin with a dashed pinstripe and white fringe.

12. Finally, owning a crested gecko can be good for you.

Okay, so I'm not saying that owning a crested gecko is going to relieve you of all your sins and make you the healthiest person alive. However, it is proven that having a pet can decrease your stress and increase your health. If a crested gecko looks like it might be the right pet for you, I urge you to do your own research into these creatures. What you find might endear you to them even more, as it did with me.

Glorie Martinez
5458
Why I Write On Odyssey