NOLA 'til ya die. 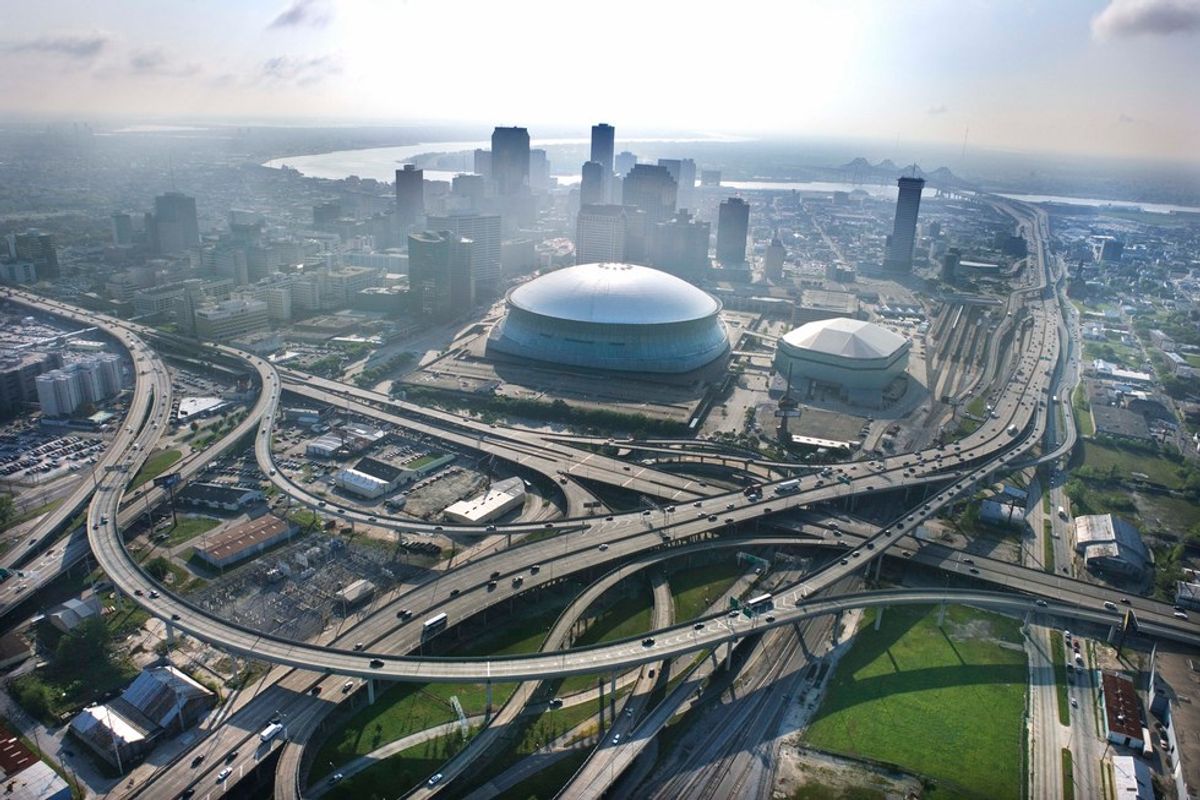 New Orleans is among the best cities in the world. If you are an out of towner visiting New Orleans, definitely try these dishes, visit these places, and partake in these activities. If you are a local and you’re currently in New Orleans, I'm so jealous of you! You have all of this at the tip of your fingers. If you are from New Orleans but are not currently there, this list will probably make your mouth water and make your heart clench. Just think of it as something to look forward to!

The Holy Trinity. Eating these classics is truly a religious experience.

Not a bad seat in the house.

Proof that not all sausages are created equal.

Be sure to drive the entire length of this beautiful thoroughfare.

Want a good one? Go to Central Grocery and Deli.

Home of 300+ year old oak trees, a 24 hour coffee shop, a golf course, a sculpture garden, and the New Orleans Museum of Art!

… from Cafe du Monde, of course!

Is there anything better than free, live entertainment? Didn't think so.

Regardless of whether you prefer getting yours from Haydel’s, Randazzo’s, Rouses, or Sucré, King Cake season is the best season!

You will never be the same after you try them. Never.

Made in Avery Island, LA. We drench everything in this stuff.

Praline flavored ice cream is a game changer. Just saying. And if you really want to go crazy, get the praline beignets from Loretta's Authentic Pralines!

If you aren’t getting the Cream of Nectar Sno-Ball, you aren’t doing it right.

Don't drink them while you drive, though!

23. Fried Chicken Festival (and every other food festival New Orleans has)

God bless Raising Cane's (another local favorite) for sponsoring this, and god bless New Orleans in general for always celebrating good food. If you're an out of towner visiting NOLA, get online to see which festivals are taking place during your stay (trust me, there will be at least one).

The Voodoo flavor is particularly tasty.

It’s hard to believe that everywhere else, Fat Tuesday is just another Tuesday.

Where the magic is made!

Starbucks is irrelevant in New Orleans. Sorry not sorry.

Every Halloweekend. Every year. Worship the music.

When men and women alike run through the city in red dresses to raise money for breast cancer research.

Does an author named Tennessee Williams ring a bell?

People from New Orleans know how to tailgate, that's for sure.

37. Celebration in the Oaks

Just look at the picture.

Not only is it delicious, but the staff and ambiance is so much fun. Try the Chef's Special Omelet!

I mean, of course.

Another weekend, another above-average music festival.

45. The Roosevelt Hotel During Christmas

They have been serving some of the best French-Creole food in New Orleans for over a century. Try their Grand Gouté: Shrimp Remoulade, Crabmeat & Crawfish Maison, and Oysters en Brochette all on one plate!

A television series that follows the lives of ordinary New Orleans residents in the aftermath of Hurricane Katrina.

This place is incredible. Be sure to catch a showing of Beyond All Boundaries in their Solomon Victory Theater. Tom Hanks narrates.

A small theater atmosphere with a unique showing selection. Great for family night!

Some of the most beautiful houses you'll ever see.

One of the best streets in New Orleans. Hands down. A multitude of boutiques, restaurants, and organizations are packed onto this narrow little street.

If the President eats here when he visits, you know it’s good.

... Even though they almost swallow our cars on a daily basis, New Orleans wouldn't be New Orleans without them!

The mock-cafe is the place to be when you're a kid.

The hummus. The pita. The tabouleh. The baba ganoush. The falafel. Everything is mind-blowing.

Home of one of the country's best burgers, according to Thrillist.

You won’t find a better view of the sunset over the Mississippi.

Spectacular, inside and out.

Because what local wasn’t dragged here on a school field trip at least once? And it's pretty impressive.

We bury our dead above ground, effectively creating what many call the "Cities of the Dead."

Check her work out. You won't regret it.

A popular bar near Tulane University.

One of the oldest bars in the country.

Anyone can join in on a celebration in New Orleans!

Don't knock it until ya try it.

I don't think I've ever met a person who doesn't like their BBQ shrimp.

So many unique flavors.

For dessert... or breakfast!

Is this place real life? Yes, yes it is.

Where the Battle of New Orleans (the final major battle of the War of 1812) took place.

Yes, these are on display in my house year-round. Yes, people actually buy and sell these coconuts on eBay.

You can basically kayak right though Mid-City. A great way to exercise and see New Orleans' unique architectural styles.

The place to go for good live music.

Everyone from New Orleans has a good Superior Grill story.

88. Shoes from the Krewe of Muses

Their most popular throw. People go crazy for these things.

GET THE WHOLE FISH.

If you go on as a pedestrian, don't get wet! The Mighty Mississippi might just splash you!

Wait… Which way is East?

Shoutout to the City of New Orleans for getting rid of the toll!

Where the Louisiana Purchase was signed in 1803.

Chef and owner of tons of good restaurants in NOLA, including Restaurant August, Domenica, Lüke, and The Caribbean Room! Where would our tastebuds be without him?

If you’re from New Orleans, there is a 100% chance you know about their Mardi Gras polo.

Only one of the most influential figures in jazz music (which was born in New Orleans, btw). There's also a park named after him.

Are you hungry yet?

...100 reasons later and I've barely even scratched the surface of why/how much I love New Orleans!