Writing Center Theory - A Brief Discussion On English Language Learners
Odyssey
CurrentlySwoonLifestyleHealth & WellnessStudent LifeContent InspirationEntertainmentPolitics and ActivismSportsAdulting
About usAdvertiseTermsPrivacyDMCAContact us
® 2023 ODYSSEY
Welcome back
Sign in to comment to your favorite stories, participate in your community and interact with your friends
or
LOG IN WITH FACEBOOK
No account? Create one
Start writing a post
Student Life 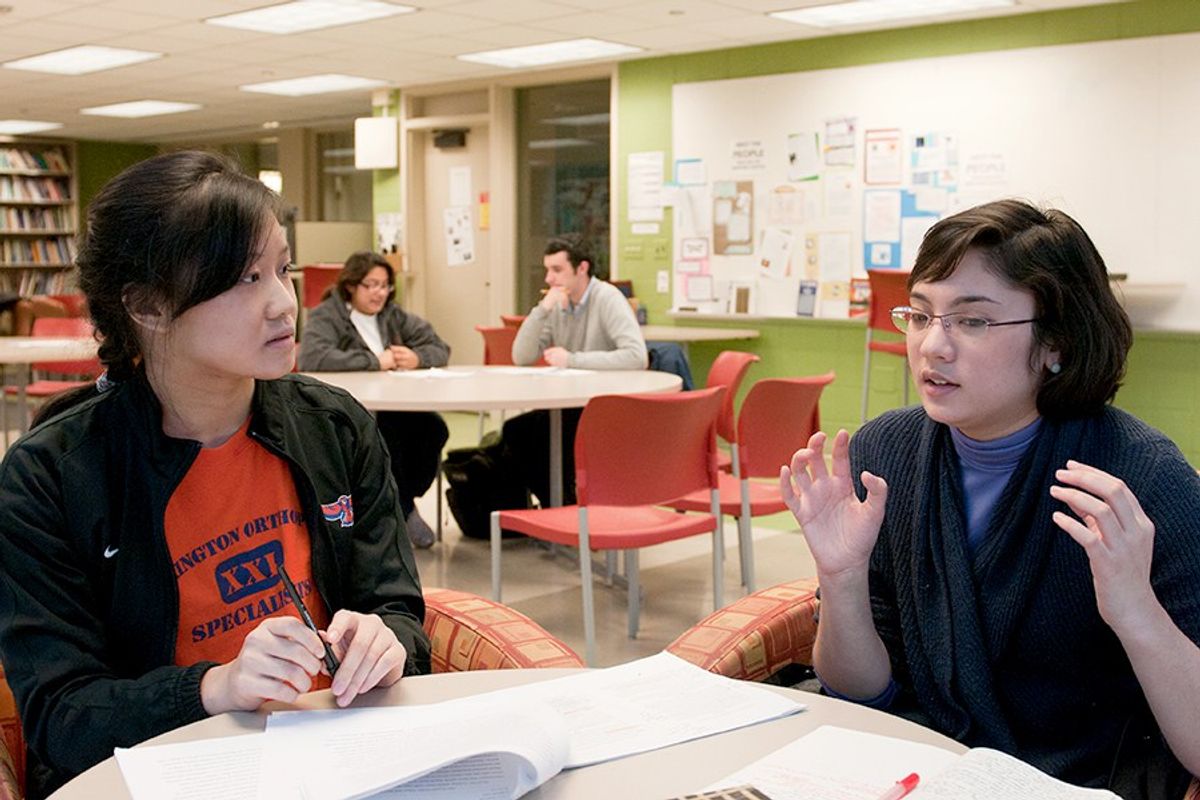 A few nights ago in my WRD 582 course (grad-level writing center theory/pedagogy), we did a very important writing exercise that I think all writing instructors should try with their students. Before I get into it, though, let me give you a general idea of what writing center theory is and why it's such an unknown, yet important thing to be familiar with.

Writing center theory is something I was first introduced to in August 2013 at my Alma mater, UIC. There, I took a course, ENG 222: Tutoring in the Writing Center. This course, similar to my current graduate level course, taught us theories about writing, writing centers, the students who come to writing centers, and how we as tutors can help students find their voice in their own writing. In addition to learning writing center (WC) theory, everyone in the class tutored two hours a week to build and hone our skills as writing tutors.

Tutoring in the WC while taking 222 was what changed my outlook on writing tutoring and what led me to fall in love with the discipline. As the years went on and I moved onto grad school, I wanted to continue studying WC theory and utilizing my skills to help make people better writers. Over the years, I've worked with hundreds, if not thousands, of different writers coming from different social, cultural, ethnic, and religious backgrounds. And though I've loved helping all of them, there has always been a specific group of writers I've been drawn to: English Language Learners (ELL).

As the name indicates, these students are non-native English speakers who are in the process of learning English as a second (or other) language. Coming from a household with one parent whose first language was not English (it's Spanish), I have always been drawn to ELL students for a multitude reasons - one being my personal familiarity with a family member learning English as their second language, and my curiosity surrounding the learning process.

As my curiosity has proliferated over the years, I've increasingly thought about a truism regarding writing tutoring: tutors need to be attentive to a writer's individual needs. However, I believe this statement holds more weight when discussing and working with ELL writers.

That being said, let's transport ourselves to another world right now and immerse our minds in the life of an ELL student writer.

Imagine that it's your first full semester at a new school in the United States. You've come over to study for your Master's degree in an American university because you've been told about the wonderful education you'll be receiving and how an American degree will boost your resume. You're excited because you've studied English during your entire academic career back home, so you have a pretty strong grasp on the language.

You're finally in your first English lit course at your new American school, and you're so excited to speak and write and think in English. You know you can do it because you've done it every day since you were 5 years old.

Fast forward three weeks: you're working on your first essay for your English course and you realize it's a lot harder to write 1500 words in this language than it is to read a book or drum up a conversation with your peers. You can't really wrap your head around why it's so difficult to articulate yourself on paper in the language you've spent the past 17 years studying in school, but you drink your coffee and concentrate on writing the best damn essay you've ever written because you know you can.

Two weeks later, the papers are returned to the class. And you, anxious as ever, get back a red-inked, marked up pile of papers with phrases like "incoherent," "illogical," and "fix this" written within the margins without any explanation of your mistakes or why what you wrote was wrong.

Defeated, you decide you hate writing, you hate English, and you hate your new American school.

Let's go back to the exercise I mentioned earlier.

It was simple. For five minutes, the class was instructed to write about our process learning a language other than English.

As everyone in American schools is required to take a second language at some point by the time they're in college, all of us obviously had some familiarity in learning another language. We all wrote our experiences in full detail (a majority of us on laptops, typing furiously as English grad students do), and by the time the five minutes were over, we stopped, pleased with our thorough responses.

Then, my professor told us what to do for the second half of the exercise.

Now, we had to rewrite what we had just written - in the language we had written about. (I.e. I wrote about Spanish, so I had to re-write my response IN Spanish).

Stunned, for the next five minutes, the furious clacking of our keyboards ceased as we all struggled with trying to transcribe our paragraphs into another language, our non-native tongues.

When the second half of the exercise was over, we discussed how this process of writing our thoughts out in another language while not being fluent in it reflects the experience of ELL student writers. Collectively, we found that in English, we were able to articulate our thoughts using high diction, strong vocabulary, and complex sentence structure; when it came to the inverse, however, we were unable to articulate ourselves past what would be considered an elementary understanding of the respective languages.

It was only then that we understood the battle between the colorful, bountiful ideas in an ELL writer's mind versus what they're able to put down on paper when they're not writing in their native tongue.

As we do not have to deal with writing in another language and do not have to adapt to academic guidelines that American professors make the entire class adhere to, it is harder for native English speakers to understand the challenges ELL writers face on a daily basis. This is why this exercise is crucial to building an empathetic understanding of what ELL students are going through during their writing process.

As writing tutors, it is literally our job to make sure we are providing the best help possible to students so that they become better writers. So while studying WC theory, we learn that our end goal isn't to help someone just for a moment. By this, we mean that we want a writer's ability to improve overall rather than just helping them get a better grade on a paper for their class.

We are helping build a new confidence around writing, whether the writer is a native or non-native English speaker; hence, we stand by the saying: "Better writers, not better writing".

This sentiment holds (almost) truer for ELL students. With ELL writers, we often tend to focus on less important topical errors like grammar, misspellings, and things that we deem "nonsensical," thereby ignoring the fact that these writers are brilliant and have complex thoughts, cohesive ideas, and limitless minds.

When a professor, a tutor, or a peer overlooks the content an ELL writer has put in front of them only to criticize the writer's weakened grasp on the grammatical and technical mechanics of the English language, we as a whole are discrediting a blossoming mind that craves knowledge and consideration.

Just because someone articulates themselves differently than you do does not make them inferior.

All minds have boundless ideas, some just don't yet have the ability to put their thoughts into words.